We had an excellent Christmas vacation this year, complete with family visitors and even a little snow, albeit a few days late. It was just the three of us on Christmas morning, and Nolan definitely seemed to enjoy the event more this year than last. 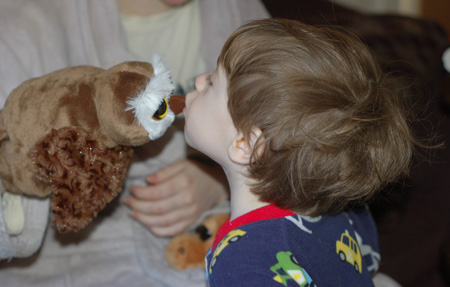 Here he was introducing himself to some new toys. Grandma Leah and Grandpa Dan sent these adorable puppets, which immediately got cuddled. The owl’s beak was too tempting for Nolan, like a little thumb; he started sucking on it right away. The moose got away with some big hugs. 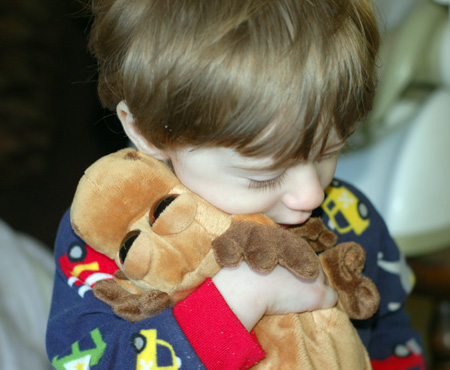 It took Nolan a few tries to get the hang of ripping open his packages; he kept wanting to do it using his tongs, which have never been dethroned as the alpha toy. He used them to tear paper, surgically remove toys from their packaging, and manipulate their parts. 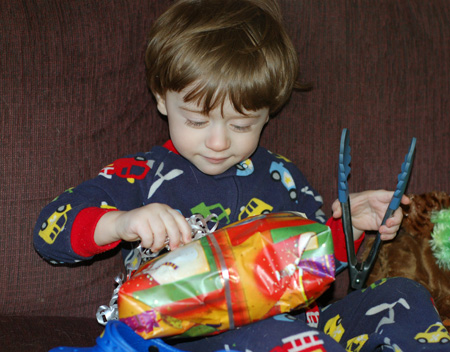 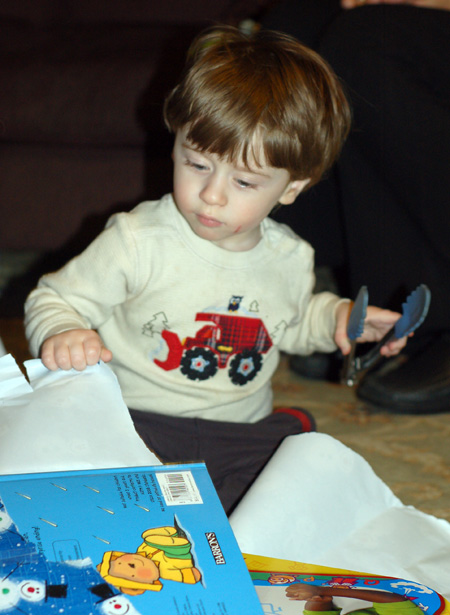 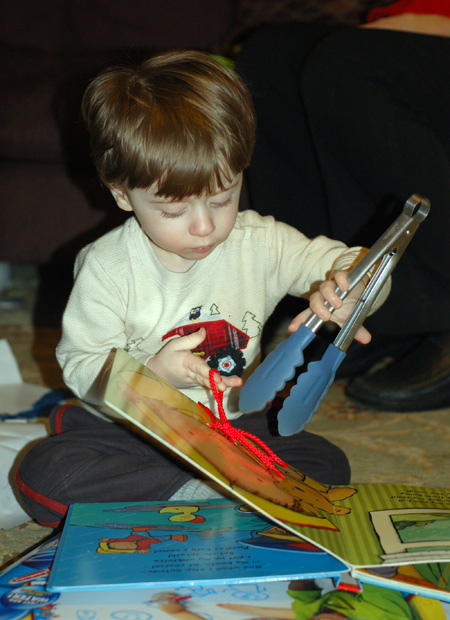 Grammie Rita and Grandpa Nelson flew in late in the afternoon, and we drove up to get them. Once I got dinner going (a standing rib roast with all the fixings) and a few snacks out to tide us over, Nolan opened more presents. What he was looking at there is just the packaging from a toy, which he particularly loved because it opened and closed like a book and had images of recognizable Sesame Street characters inside. 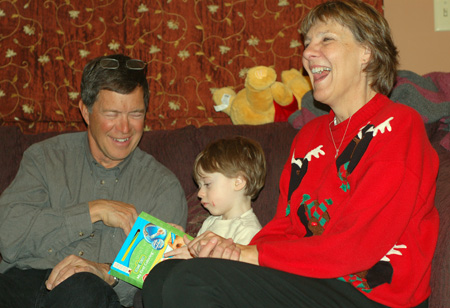 The next few pictures were taken after church the Sunday after Christmas. Nolan got to try out the church nursery for the first time, and he behaved beautifully while we were otherwise occupied; we were told that he went around kissing all the other kids. 🙂 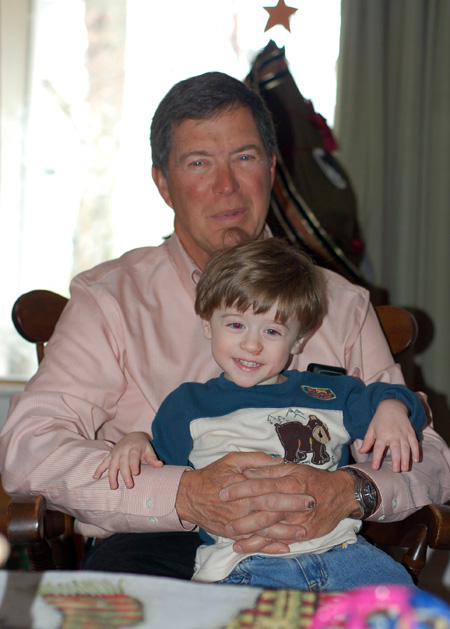 You can also sort of see our Christmas tree, which I fashioned from a tower of boxes and a swath of green cloth. After these photos, we disassembled the “tree” to get at the boxes, which contained Nolan’s last few presents, building blocks and a little car and gas pump. And since there is no soundtrack to these still photos, just imagine the earsplitting shrieks of joy that Nolan was emitting during the entire photo session. He had a great time sitting in the big boy chair. 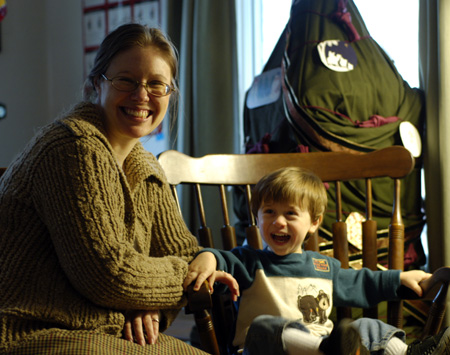 We had great fun with Grammie and Grandpa, including trips to Toys R Us and OMSI. Nolan was particularly enamored of his Grandpa, but Grammie was able to steal his attention sometimes too. 🙂 They were very impressed by how much he’s grown since their last visit: walking, running, climbing; starting to drink from big boy cups, wielding tongs with great proficiency, giving wonderful kisses and hugs (complete with a pat on the back), and saying lots more words, with a few handsigns thrown in for good measure. 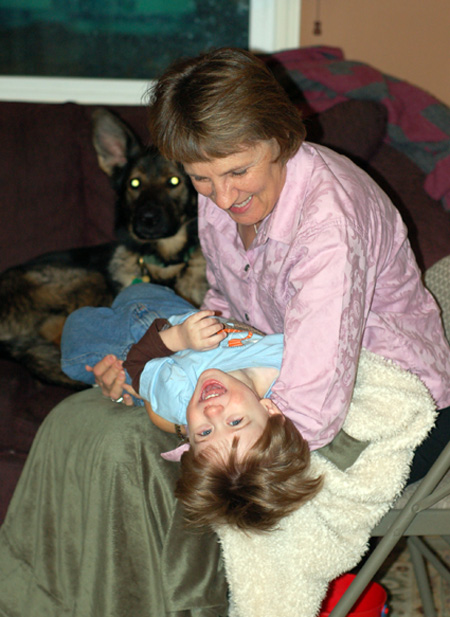 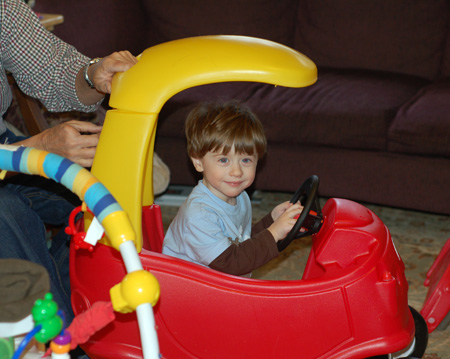 This last photo was taken the morning after Grammie and Grandpa headed back to Colorado. Nolan (and Freyja, for that matter) was eagerly looking out the window, expecting their arrival again. 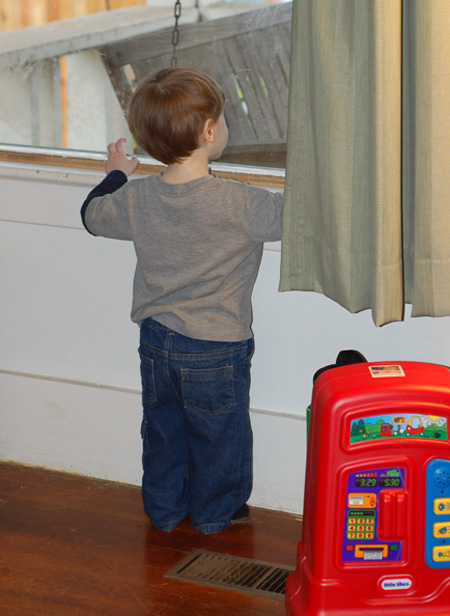