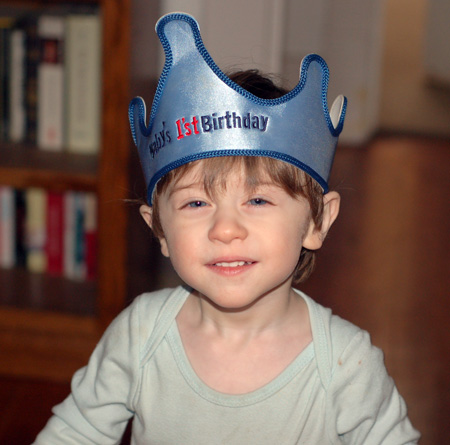 A few new pictures of our funny little man! He refused to wear this crown at his birthday, but he likes to wear it sometimes now (or put it on Mama and Daddy). Poor kid desperately needed a haircut but wouldn’t hold still long enough for me to do it. 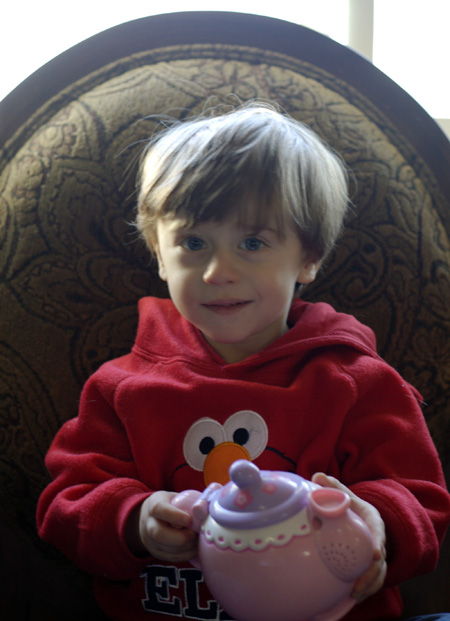 This teapot is one of his very favorite toys. He first played with one like it at his little friend Lola’s house, and loved it so much that we ended up getting one for him despite its very girly decorations. He loves pushing the music button to play songs and dance along, open and close the lid, and has gotten very good at pretending to pour and drink tea from the cups with us. I should note that it appears to be a right-handed teapot based on the orientation of the face and handle, and Nolan still prefers using his left hand for most activities. 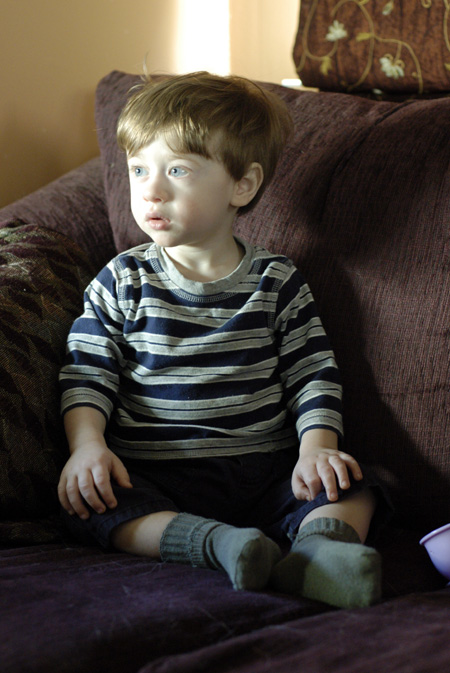 His hair looks so much better now, eh? The key was a high chair/ Sesame Street combo. In this photo, he’s watching Sesame Street, and cannot be distracted unless you block his view. Funny how he could care less about television one day, and the next, you mention his favorite show and he runs to the TV and gives you the remote to start it up. 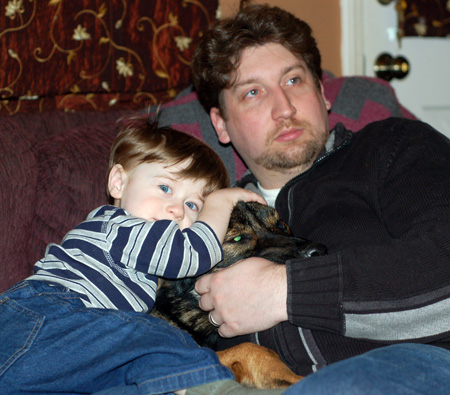 Here Nolan was cuddling with his daddy and his patient puppy. Yes, he was sitting on top of her, and she didn’t twitch a muscle. 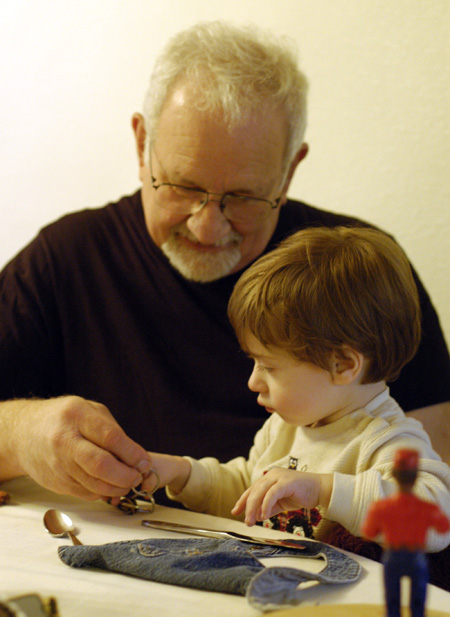 Now we’ve got a few photos from Thanksgiving. Jeremy’s Uncle Walt and Aunt Sandy were kind enough to invite us to their home in Vancouver this year. Nolan had a blast playing with new toys, exploring, and cuddling up with all of his relatives—and he didn’t make out too badly tasting all of the food at dinner either. He especially seemed attached to Great Uncle Walt. 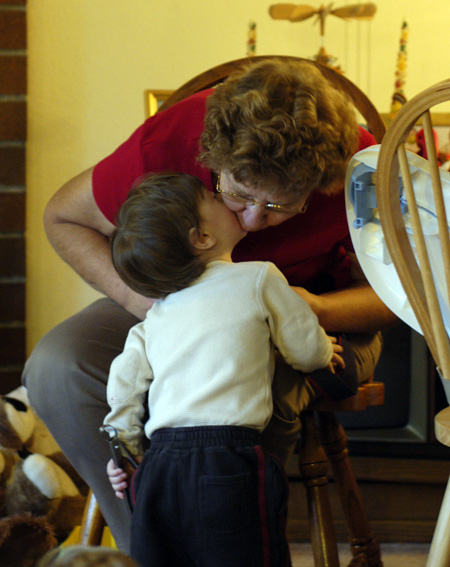 We had about 5 minutes of shyness when we first arrived, then he caught sight of the matchbox cars and the toy top, and after that he only stopped playing long enough to impart big hugs and kisses on everyone in sight, and make sure they had at least a few toys to hold onto. Here is Great Aunt Sandy getting some love. 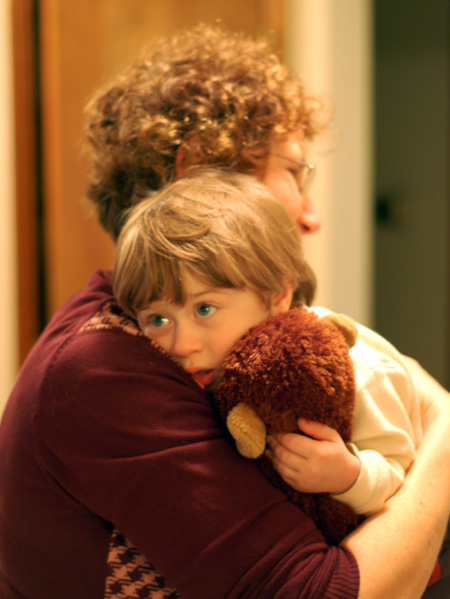 Some cuddles with Monkey and Great Aunt Miriam. 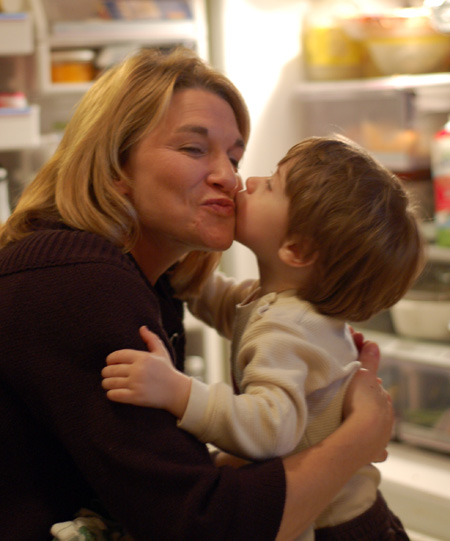 Nolan was particularly busy after dinner, when everyone was in the kitchen opening cupboards and putting food in the fridge. Every time a door or drawer opened, he was right there to help close it. He also gave hugs and kisses to anyone bending down in front of the refrigerator, in this case Jeremy’s cousin Michelle. 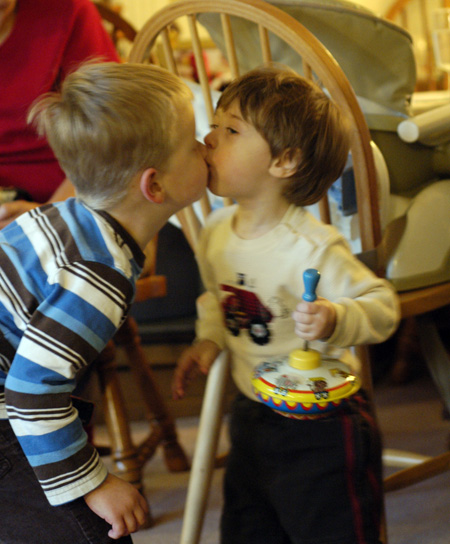 Michelle’s two children, the owners of the toys and Nolan’s second cousins, were also in attendance. When 4-year old Harrison woke up from his nap, Nolan ran right up and tried his darndest to give Harrison a kiss. It took Harrison a moment to realize what Nolan was up to, but Nolan just kept saying “mmmmmmm” and grabbing at his shoulders until Harrison bent down a little. Nobody was left out! 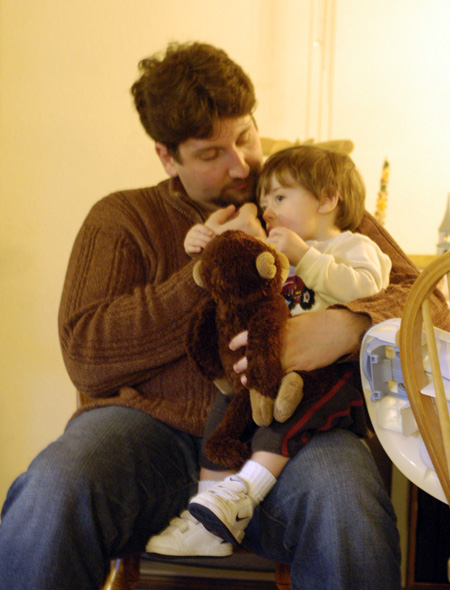 Nolan slept in late on Thanksgiving, so he stayed up the whole time we were there. Near the end, he did get a little groggy, and preferred to sit on laps rather than running around. Here he snuck in a few minutes of finger time with Daddy, prior to napping in the car on the ride back. It was a lovely Thanksgiving, and the only part we missed was leftovers the next day!