I’ve got a bit of a backlog of photos and information to share, so I hope you’re up for another image-heavy post. 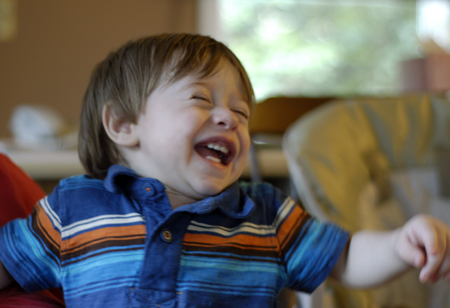 Nolan is almost 16 months old now, and still our smiley string bean. At his check-up at the beginning of July, he was half an ounce short of 20 lbs—which is right on track for his personal growth curve—and a respectable 31″ tall. His first set of molars came in, so he now has 12 teeth, and I’m pretty sure he’s currently working on his canines. The photo above shows Nolan giving us what we call his full-body smile: he grins right down to his toes sometimes. 🙂 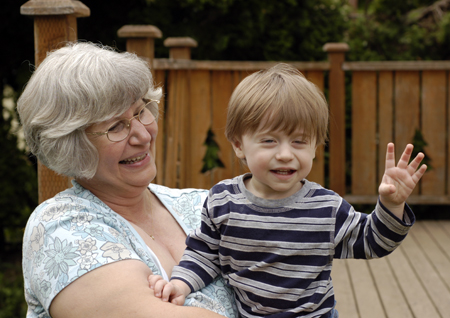 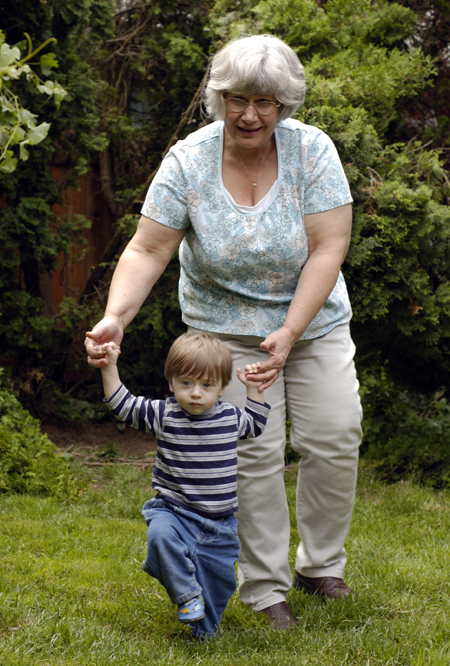 Jeremy’s folks came out for a visit around our anniversary last month. They were only able to stay for a few days, but got in lots of good quality snuggle- and play-time with their grandson. And they brought him a duck-on-a-stick, which is now one of his favorite toys! (More on that in a moment…) 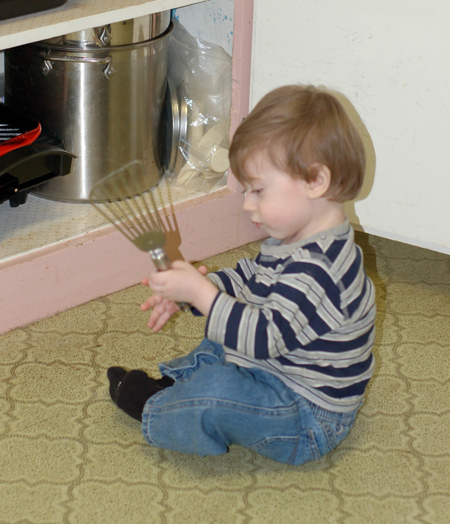 Another one of Nolan’s favorite toys right now is my favorite fish turner. He steals it out of the dishwasher in order to carry it all over the house and bang it against various objects. It makes a particularly nice resonant clang when he spins in a circle and rubs it against the linoleum. 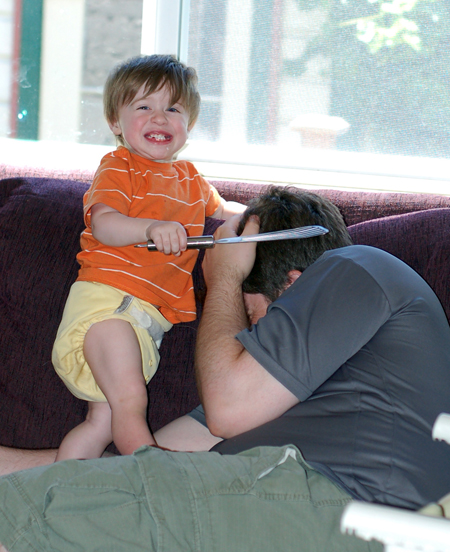 It’s also good for beating on daddies with… I had to get photographic evidence of that! 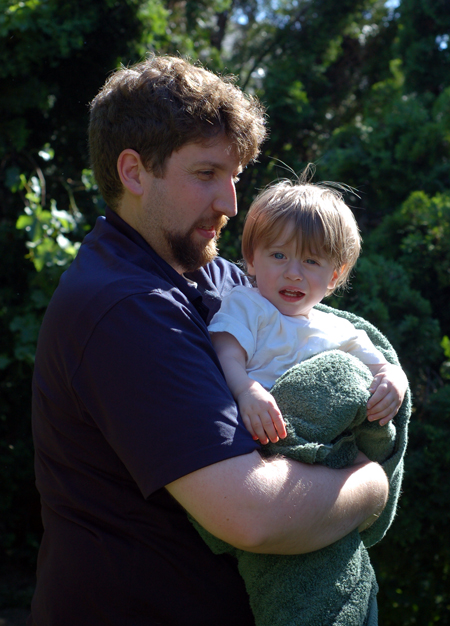 Nolan’s finally gotten over some of his separation anxiety about leaving me, so he has been spending more time hanging out with his daddy, and even chases him around a little. He still loves going with Jeremy when it’s time to let Freyja out, and even helps turn the doorknobs now. This photo was taken after Jeremy rescued him from the dreaded kiddie pool on the 4th of July, so he was still a bit discombobulated. 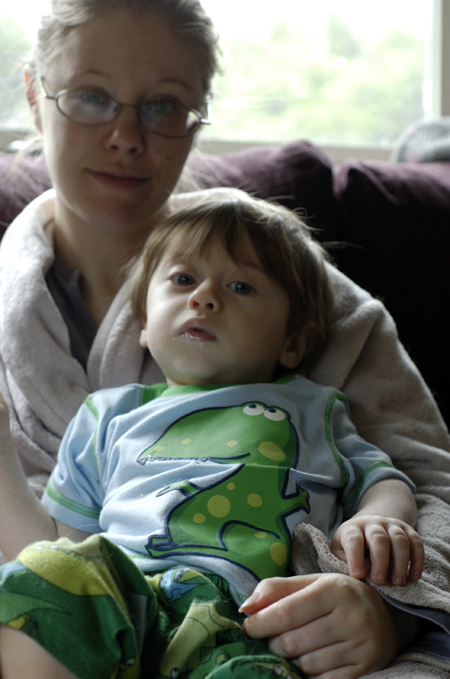 Nolan is still my little cuddle-bug. Some mornings he wants to spend two hours just cuddling with me and sucking my finger, almost like he’s trying to make up for the time lost overnight. 🙂 He’s started giving both of us tons of hugs, which is awfully sweet, but also makes him kind of hard to pry off my neck at bedtime. This photo was taken one lazy weekend morning just after his first bottle of milk. 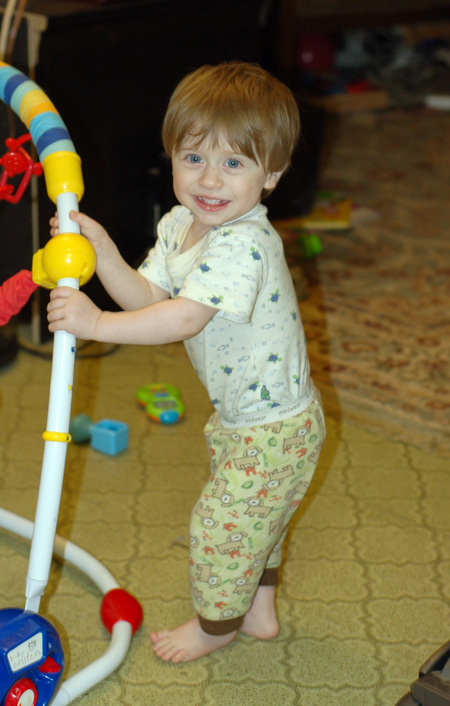 Nolan had some major milestones this past week. He’s been cruising like a champ ever since he first started crawling in May, and for the past month or so, he’s been brave enough to take a few steps on his own, just between the furniture. But all of a sudden on Wednesday evening, he decided he was brave enough to venture all the way across the middle of the family room on his own two feet, and ever since then, he’s been walking like a champ. Granted, he shuffles like a little old man, but he has a huge grin on his face the entire time, and we know it won’t be long before he’s running around the house. Within hours of walking, he had figured out how to squat down and pick up a toy without losing his balance, dance to the beat of his toy drum (with one hand on my knee for stability), and climb up onto the sofa all by himself in order to get on my lap or look out the window. 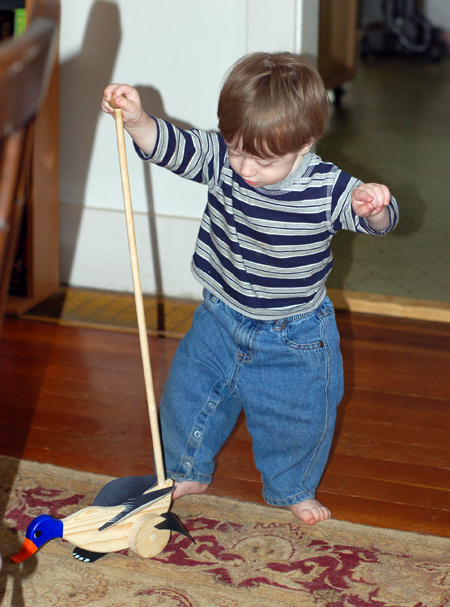 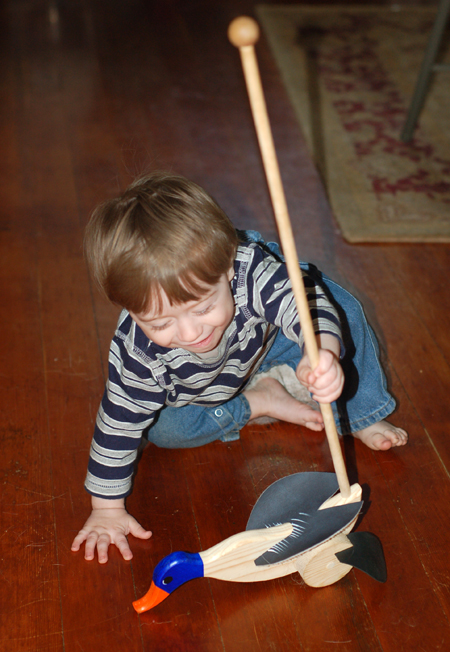 The aforementioned duck-on-a-stick has been a good motivator for getting Nolan on his feet. He’s getting pretty good at pushing it around, while crawling or walking, and also likes bringing it to me for further entertainment. 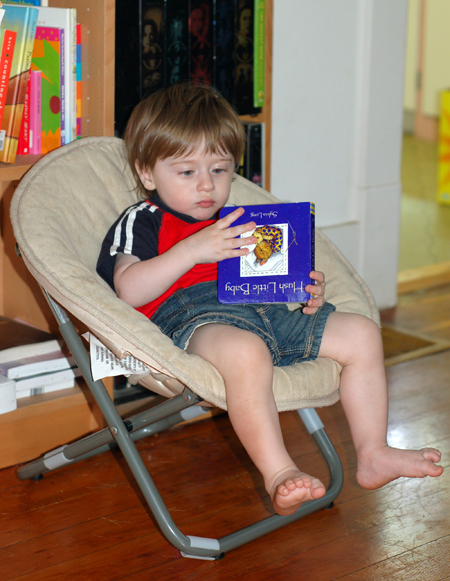 This last photo is for my mom, who I know will get a big kick out of it. She found this little chair at a garage sale and mailed it to us, and it is just Nolan’s size. He spent a good 20 minutes when we first set it up, sitting there and pulling book after book off the shelf to look at in his little chair, and then most of the afternoon climbing in and out of the chair repeatedly with various toys while I held on to make sure he didn’t take a tumble. Looks pretty cozy, eh?