Nolan has been a very busy boy these past few weeks. He can now sort of point at things (looks more like he’s saying “I’m number 1,” but we get the idea), wave hello and goodbye (when he feels like it), and pick out the hiding Curious George on every page of his favorite book. He’s also finally figured out how to say the vowel O, but no words yet.

Nolan isn’t walking on his own yet, but his activity level has doubled or tripled. He pulls himself up against my knees and cruises back and forth along the sofa most of the day. Give him a finger or sleeve to hang onto, and he sets off immediately, often on the trail of Freyja or one of her toys. His steps are getting much more confident, and he stomps his little feet so firmly on the floor as he goes that the dog thinks someone is knocking at the door.

But Nolan is almost as busy when he’s sitting on the floor now too. Since he is firmly anti-crawling, he used to sit pretty still and just play with his toys, but he has figured out how to dig in his heels to spin around 360 degrees like a little top. He also stretches so far forward to grab at toys he can’t reach that his little bum comes off the ground. This weekend he combined those motions to come up with his own unique mode of transportation, the likes of which I have never seen. 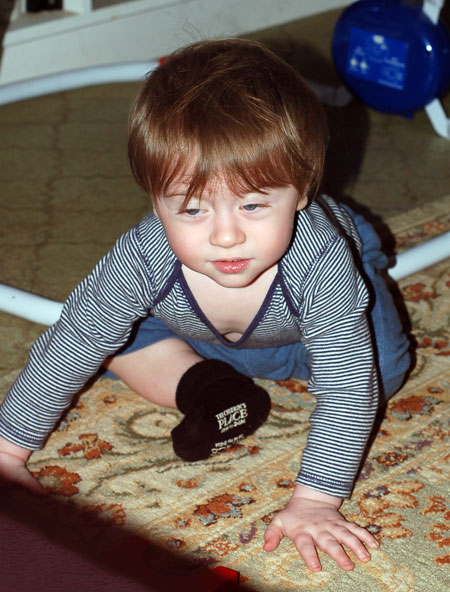 I was taking pictures of Nolan when he first started wiggling around on Saturday, but I wasn’t able to get a clear shot of it. This is a bad pic of Nolan, but it’s the most descriptive shot I took. He puts his hands on the floor in front of him, stretches forward until his butt comes off the ground, and then tucks his left leg behind him. To move, he pulls forward with his right heel, and pushes off with his left foot, balancing with his hands. It would almost be crawling if he moved his right leg back and dropped his knees, but when we help him into that position, he just freezes and starts fussing. 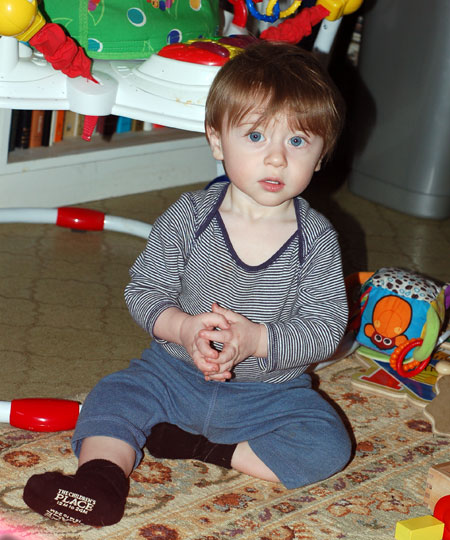 He can scooch a couple feet at a time with this funny little motion, which has always been enough to get him over to whatever he’s trying to reach (mostly toys, dog, or mama). You can see how his left leg is still sort of tucked under him here. Sometimes he finishes flat on his belly stretching his arms to grab it, but he is able to push straight back up into a sitting position from his tummy now (thank heavens!) 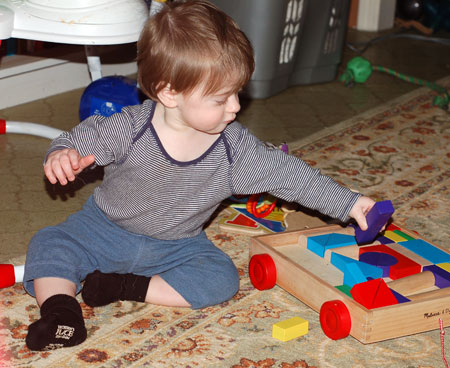 Nolan has been playing with blocks a lot lately. He likes the sound they make when he bangs them together, and he likes knocking down stacks that I set up for him. He’s learning about sharing, so there is also a lot of handing blocks back and forth… 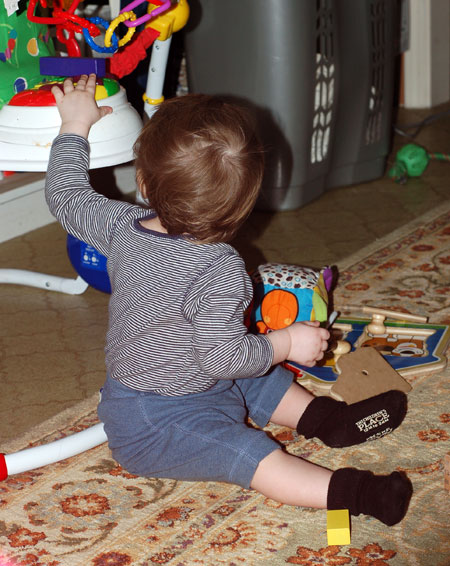 And seeing where he can reach… (You can see his two side-by-side cowlicks pretty well in this shot… The dominant one is on the right and goes counter-clockwise, the one on the left is clockwise, so it all clashes together at the top.) 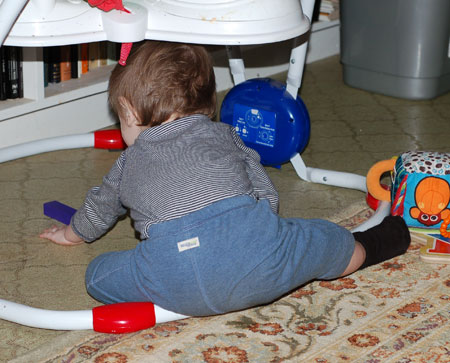 And he’s particularly fond of smacking them on the linoleum, which makes a much more satisfying noise than the carpet. 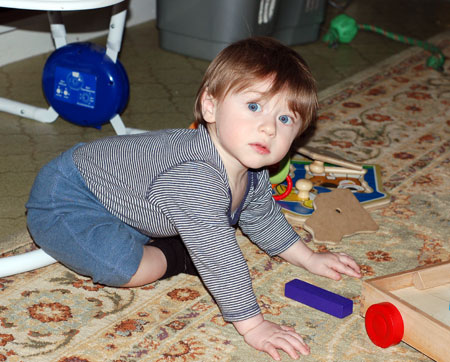 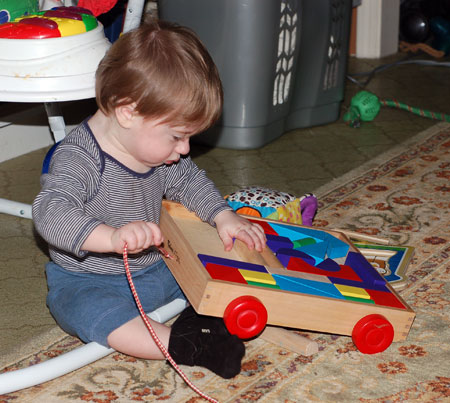 Then he wheeled around with his heels, pulled the tray back over to him, realized he was halfway under the jumperoo and couldn’t sit up straight without getting bonked by the seat, and wailed for a rescue. Have I mentioned that in addition to all of this activity, and some seriously swollen gums (wish those molars would just get it over with and break through), he has quite a case of separation anxiety? Only Mama will suffice, and it doesn’t even count if he’s on Daddy’s lap and I’m right next to them. And no more self-soothing or self-entertaining in the morning if he wakes up before I come in; we’ve had at least 3 early days in the past week—by which I mean 6 or 7am, compared to his usual 9 or 10am.