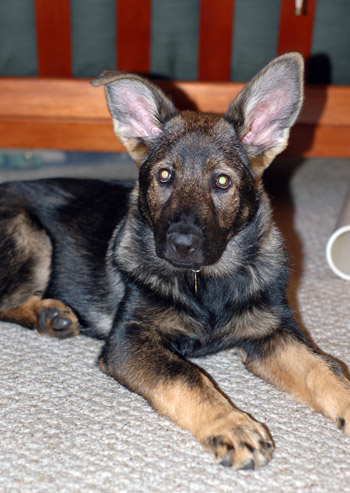 We have a pressboard barrier between the living room and the bedroom/bathroom area that has been there ever since we got the ferrets. One way we’ve been gauging Freyja’s growth is how tall she is compared to that barrier: When we got her, she could just barely peek over the top if she put her paws up on it. Now she can basically look over the top of it just sitting down.This morning while Jeremy took his shower, I was brushing my teeth and throwing a rope ball for Freyja, who kept bringing it back and dropping it over the barrier for me to throw again. After 5 or 6 repetitions of this, she came back without the ball, put her elbows over the barrier like she usually does to get a better view of what we’re doing, and then just leaned forward until she was able to slide her front paws to the ground and her back ones over the top of the barrier. No leaping or faceplants, like we were anticipating… just a big calm dog overcoming an obstacle and sauntering into the bedroom like she owns the place. None of our clothes and shoes are safe now… (gulp!)