You probably think this post is going to be about the fall TV schedule, especially since we now have Dish and can record two shows at once. Of the new shows, Heroes seems promising, Jericho sounded like a neat idea but the premiere wasnâ€™t so great, and weâ€™re watching Studio 60 and Kidnapped for the time being also.

I got a surprise phone call from one of my aunts aÂ few weekends ago, inviting me to come along with her and my cousin to the Oregon Flock and Fiber Festival in Canby. Of course I was delighted to accept, no less because I hadnâ€™t seen either of them for several years (they have just moved back to Portland from John Day, which is way out in eastern Oregon—quite a long drive). Also there was the little matter of the Blue Moon booth I knew would be at the festival….

It was a lot of fun. Iâ€™d never been to it before, due to Jeremyâ€™s fiber and knitting aversions. I got to spin a few feet of yarn on a drop spindle for the first time: it all went so quickly, and I was really horrible at it. Still, I could have been tempted to purchase a kit if it werenâ€™t for that Blue Moon booth just waiting somewhere to take all my money. Not to mention the fact that Jeremy would have about keeled over if I started making yarn in addition to buying and stashing it. So we moved on to the barn, and petted all the adorable little alpacas and pygora goats and llamas and sheep and angora bunnies. I had a male albino English angora rabbit named Baron Von Fluff when I was in high school, and the angora bunnies really made me miss him. We got him for his sweet and gentle personality, not for his incredibly soft fur, and carried him around on his back like a baby. Guess I know where to go now if I ever have an irresistible urge to get a rabbit… 🙂

I think we touched practically everything in all the booths, and I restrained myself admirably from making any purchases. After several hours of wandering around, I started to get a little nervous about finding the Blue Moon booth, but of course it was in exactly the last spot we visited, and it was packed. I had been hoping to get a rock-themed colorway of STR to make another pair of socks for my father the geologist, but nothing was exactly appropriate. I am tempted to try to order the Petrified Wood colorway, because, from photos, I think that would be perfect. That small disappointment didnâ€™t stop me from filling up my arms with sock yarn, though, as witness: 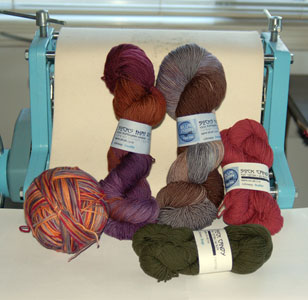 From left: STR Lightweight in Rooster Rock (the one I couldnâ€™t resist winding instantly), Covelite, and Downpour (Dad, is that close enough to â€œWet Mudâ€ for you?), and Sock Candy in Madder and Borage (in front).

I got one skein each of the STR Lightweight, and two each of the Sock Candy, though there was only one left in Borage by the time we found their booth; they kindly offered to send me a second skein free of shipping, so I happily took them up on it. Jeremy approved the color, so that will be a pair of socks for him, I think.

Other than the surprise excitement of the festival, Iâ€™ve finally gotten back around to sweater knitting. I ordered enough yarn last month to knit up two cardigans to wear at work this winter, and am already a good way into the first project, the Tweedy Aran Cardigan from Norah Gaughan in the Winter 2001/02 issue of Interweave Knits. I didnâ€™t have that issue when I fell in love with the sweater’s photo, but I was able to track down a copy. Iâ€™m using Kathmandu Aran Tweed in the color Twig, a caramelly tan that I think will go really well with the vast majority of my wardrobe, but which Jeremy claims looks like burlap when knit up. I donâ€™t quite see that, and the yarn is soft and warm, so Iâ€™m rather pleased with it.

The pattern is an interesting one, but a bit hard on the hands, thanks to the volume of twisted stitches. I have finished the back, and am currently working on the fronts, both at the same time. So far, so good. (And photos when I get the chance…)

I am planning on making the other cardigan from Cashmerino Aran in a natural white color, and at this point I am considering the Sienna Cardigan from this fallâ€™s IK. I think the gauge is different, though, so the jury is still out on that one.

So keep it tuned right here all fall for more rockinâ€™ socks and cuddly cardigans. Over and out. Hm, thatâ€™s more 50â€™s radio than TV. Letâ€™s try that again… Well, I canâ€™t think of a good sign-off; maybe I should hold a contest like Katie Couric did? 😉