Most of you who know me know that I don’t mind referring to myself as a bread-fiend. I love bread. During the past couple of years, Julie has been learning quite a lot about cooking in general. Wanting to do my part to encourage this behavior, I bought her a fancy bread-baking book about a year ago. While Julie, in my humble and unbiased opinion, has become an excellent chef, she seems to have little interest in baking bread.

So, I’ve decided that, after graduation, baking bread would need to fall within my domestic purview. Besides, apparently artisan bread baking is one of the more masculine cooking disciplines. While Julie isn’t terribly thrilled with the amount of time that goes into baking bread herself, she enjoys a fresh loaf almost as much as I do.

Over the last two months I’ve made over a dozen loaves of bread, almost all of them recipes from The Bread Baker’s Apprentice by Peter Reinhart. This is an excellent book which seems to focus on cold fermentation for making world-class breads. The cold fermentation process means that the breads normally take two to three days to make as you retard the leavening process to allow as many of the complex sugars to be converted by the yeast as possible. This is intended to bring out as much flavor as possible. Here’s a sampling of some of the breads:

This was the first loaf I made, a boule of Pain a l’Ancienne. This bread is the poster child for the cold fermentation process as it contains nothing but flour, water, salt and yeast (note that there is no added sugar to feed the yeast and the salt will slow the fermentation process: this is why you have to let it ferment overnight). However, by letting the dough ferment in the refrigerator overnight, the finished product has a complex, subtle and mutli-layered flavor. Still one of my favorite breads.

These are a couple loaves of simple Italian Bread, also made with a cold fermentation. 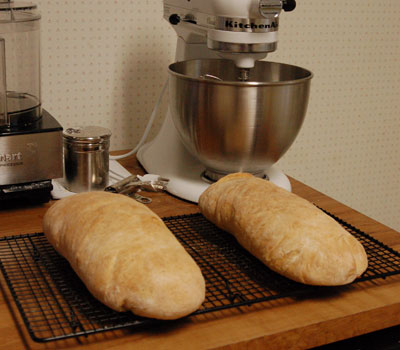 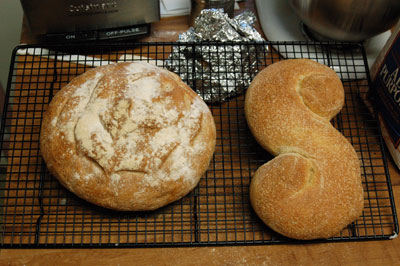 Julie made an excellent shrimp and avacado salad, and these rolls turned them into wonderful sandwiches. Unfortunately, I can’t remember which recipe I used for the rolls, but they were hearty and quite tasty. The baguette on the right is a loaf of Pain a l’ Ancienne. 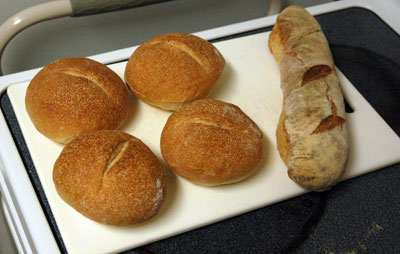 Here are a couple loaves of Ciabatta bread. Ciabatta dough is quite wet compared to most bread dough and needs to have a ‘couche’ for proofing. I used a scrap of heavy linen fabric leftover from making canvases, well-rubbed with flour to make it non-stick. 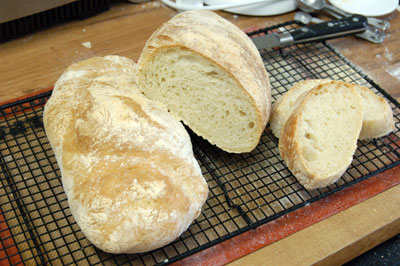 This is our other favorite: Vienna Bread. I’ve made it two or three times now. This is the most recent loaf, and for an added flourish I slathered a slurry of Dutch Crunch to the top, which adds a bit of sweetness and gives a nice mottled appearance to the top.

I’ve baked several other types of bread as well, including Rosemary Potato bread and a very large batch of bagels, but don’t seem to have taken photos of those.

I’m really enjoying baking bread and am grateful that Julie is sharing the kitchen and all of her cooking toys with me. The Kitchen-Aid stand mixer in particular is a godsend. For our anniversary this June, we purchased a bunch of kitchen tools, most of which are most useful to bread baking: a bakers peel, a digital cooking thermometer and a kitchen scale. More bread to come…