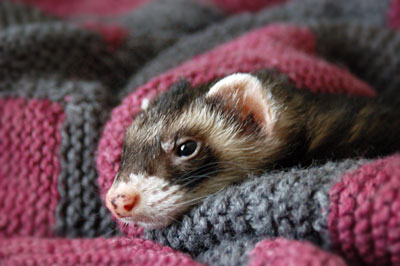 Rocky was our little ambassador, a model representative for his kind. He never played too roughly and didn’t have it in him to bite. He had a congenital eye defect that diminished his sight somewhat, but it only made him more endearing: he tried to greet everyone with a polite sniff on the mouth, sort of his way of saying hello.

He had an adventuresome streak and was known to leap without looking, usually with amazing dexterity. Once, however, he managed to get himself wedged by the neck between a desk and the wall, three feet up, and had to be rescued before choking himself to death.

He was the only ferret of our busyness that everyone, humans and ferrets alike, found congenial. He was always curious to know what his humans were eating but would never partake himself. He had unusually long legs and large soft paws. When he galloped in pursuit of one of his sisters, he looked for all the world like a bounding Pepe LePew. He loved cardboard and leather, often attempting to stash entire boxes or steal the belt from off your waist.

Rocky was a cancer survivor and had major surgery to remove a tumor on his right adrenal gland two years ago. This winter he developed a second major internal cancer on his pancreas and remained on medication (preferably malt-flavored, not bubble-gum) until the end. God bless you, Rocky, you are missed.