So here is my belated update, seven posts with one blow… ready for an awful lot of photos and rambling? 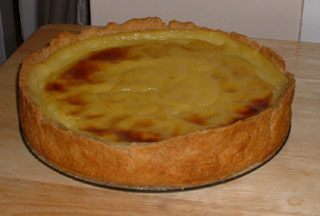 Week before last, the day before the plague struck the library, we had a potluck to celebrate the departure of our graduating student workers. In retrospect, we really just threw a party for the flu bug, but we had all the best intentions going in. My contribution was a Parisian flan, a lovely custard pie with deceptively few ingredients that come together in 8 or 9 short hours. It set beautifully, and tasted pretty good, but other than the wonderful (if a bit temperamental) crust, it is probably not something I would make again. 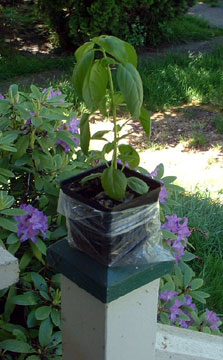 Three weeks ago there was a plant sale at Bush Park, and I brought home a hardy lavender plant, a tri-colored sage, and a little basil plant. The first two went right in the herb garden, but the basil made me paranoid, because although I purchased two or three basil plants last summer, I was unable to get them to do anything but wilt and die. I decided to keep my new basil indoors for the time being, living on my narrow kitchen windowsill (so I would remember to water it) and going outside on the front porch on warm, sunny days. Miracle of miracles, it grew and thrived, and is now twice the size it was when I brought it home. I am so happy with its progress that I named it Presto the Happy Basil Plant (because its growth is magical and it will one day turn into pesto), and talk to it every day as I move it in and out of doors. I think this means it is time for Jeremy to come home so I can start holding two-sided conversations again. 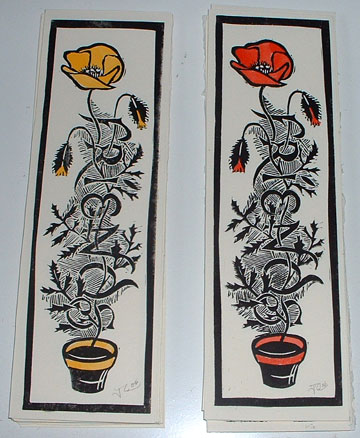 My mom commissioned a printed bookmark to give as gifts to folks at her school, and here is the finished product. It is just a simple little linocut, about 2.5×9″, printed in black oil-based ink on Rives lightweight paper, and handpainted with watercolors for a little additional visual interest. 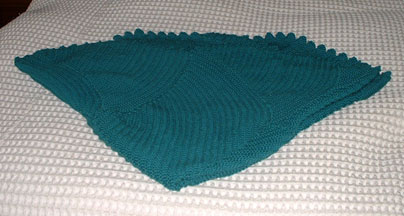 I finished the Curlicue coverlet while I was recovering from the scourge; even knitting was almost too exhausting, but I drew upon unforeseen reservoirs of strength and knit up the last two sections. Sorry about the folded photo; I need to come up with a good place to photograph it where I can get high up enough to capture the whole thing. Plus, it still needs blocking and ends woven in. I doubt it will block out perfectly, but I am still quite happy with the way it turned out, and also the fact that I have at least a third of the last skein leftover to make an accompanying baby hat or something. 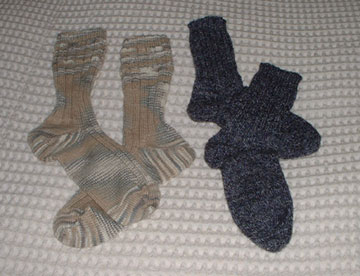 I finished two pairs of socks since my last knitting post: the Spey Valley socks for my grandpa, and the pair of socks for my aunt. I’m quite pleased with both. The Trekking tweed is lovely and entirely camera-proof; I ended up abandoning the Chutes-N-Ladders pattern and doing a simple garter rib on #1 needles, and I like the effect, simple but elegant. The Spey Valley pattern is a nice one that I would certainly consider doing again, perhaps in a solid color to better show off the textured band at the top. Each sock used just shy of 1 skein of the Lorna’s Laces Shepherd Sock, which did some funky pooling stuff, but not entirely to its detriment, I think.

With the remaining skein and two bits of LL, I dared myself to knit a pair of socks for me. Since I have such small feet, I thought I could at least squeeze a pair of ankle socks from it. I carefully divided the skein into two equal balls (no mean feat for someone lacking swift, ball winder, and scale; guess we’ll see how well I managed it soon…), and cast on for a toe-up sock. Here is what I ended up with from one half-skein ball: 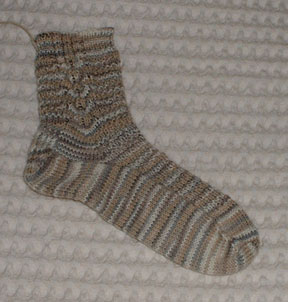 A perfect little ankle sock based on the Child’s French Sock pattern in Knitting Vintage Socks. I needed the socks to be toe-up rather than cuff-down to allow the maximum cuff length for my yardage. Although I immediately considered my standard short-row non-pattern, I really preferred the way the sock looked with the side lace motifs flowing into the gusset; so, I opted for the reverse heel-flap method in Sensational Knitted Socks, adjusting for my stitch count. It was a nice change of pace, and I think came out well, though I’ll still use the short-row method as my default pattern. I decided to put the lace motifs (which are of course reversed) only on the sides, leaving the more simple texture pattern on the instep. I turned out to have just enough for a nice little ankle sock, with a bit left over to assuage my paranoia for its mate. Altogether a success… now if I can just remember what I did for the second sock… 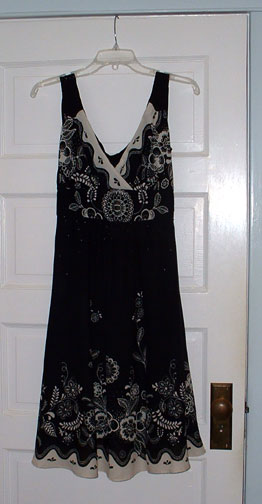 In preparation for the upcoming event, I did a bit of shopping these past few weeks. The weekend before I got sick, I spent something like 8 hours trekking around Salem from Value Village to the mall, most of that time with a backpack full of library books on my back (don’t ask). I had great success, and spent more money than I probably should have, partly because I had to keep returning to the mall… really, I HAD to! 😉 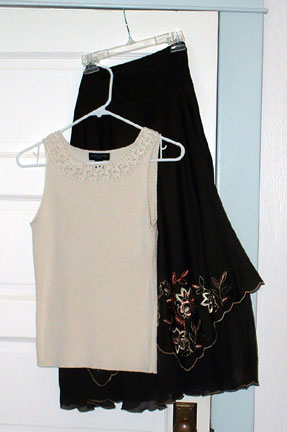 The first image is the beautiful dress I am going to wear to Jeremy’s graduation, barring blizzard conditions. It was part of the reason I had to keep coming back to the mall, because Nordstrom’s didn’t have it in my size and had to order it in for me. The second pic is the skirt I got just in case the smaller size dress didn’t fit me after all, and which turned out to cost more than the dress. The shell with it is another reason I kept coming back to the mall: it cost $50 the day I bought the skirt, so I refused to even try it on, but when I went back to pick up my dress, it was 50% off so I had to get it. A few days later I went back and got the matching cardigan, which turned out to be 65% off by that point. It’s so nice to see clothes that fit my (pear-shaped) body type at last!

Finally, as if y’all didn’t know, I will be going to New York later this week for Jeremy’s graduation and diploma show. I can hardly wait to bring him back home and know he won’t be going anywhere in a few months. So if the blog is quiet, that is probably why.

Jeremy’s Farewell Party (and a Recipe)