Haven’t posted in a week or so… here’s an update on how all of the major projects I am working on are progressing.

First up is a portrait drawing: a multi-week pose from Dan Thompson’s Portrait Drawing class. I think I’ve got just under 6 hours into the drawing at this point and I’ll get another 2-4 hours of work time before the class is completed. 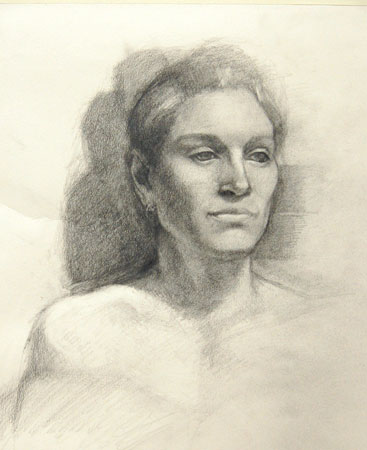 Next is the final plaster cast for the Sculpting the Head class with John Horn. I very much enjoyed sculpting in clay, though I have to say that the casting process is exceedingly traumatic. After the clay was finalized (9 weeks worth of work), we stuck thin shims of metal into the clay around the sides of the head, as well as the base of the neck. Then a thick coat of moulding plaster is applied to each side of the head up to the shim wall. Once that is dry, the plaster-encased clay is submerged in a bath of water for several hours to loosen up the seal. Then if everything is done just so, the two halves of the mould can be removed from the clay.

Unfortunately my mould broke… into about seven pieces. As careful as I was, it seems that my plaster was just a bit too thin. Fortunately, John helped me to piece the parts of the mould back together and I was still able to pour a positive. Removing the plaster ‘waste’ mould from the (also) plaster positive, however, is no less traumatic. One has to chip away the negative using—preferably—a dull screwdriver and a hammer.

Anyhow, after a long day’s work and recovering from the feeling of having lost 10 weeks’ worth of work, I finally ended up with a plaster version of the clay portrait. As you can see, there are still a few seams from where the parts of the negative were fit together, as well as a few gouges from where I was a bit too zealous in removing the negative. In my defense, I did spend a good three hours removing the negative, so it wasn’t as if I was rushing. I also lost a bit of the helix of the ear on the other side, though I still have the broken part. Apparently I can reattach the severed ear piece with a bit of good old fashioned Elmer’s glue. I can fill in the gouges with a bit of joint compound, and of course a bit of sanding will remove the ridges. 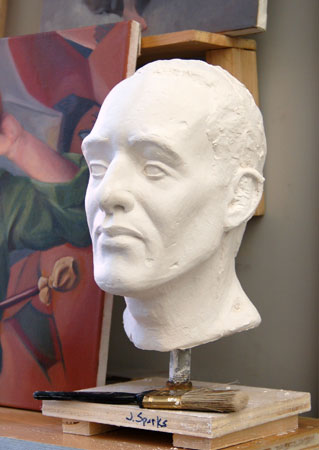 I’d still like to do another portrait sculpture or two, though next time I think I’d try to find a less emotionally draining method of finalizing the piece. There definitely is a high-level craft to casting. I can see why it was normally split into two job functions: the artist to make the sculpture, and the artisan to turn the clay into the final medium.

Lastly is the diploma project: 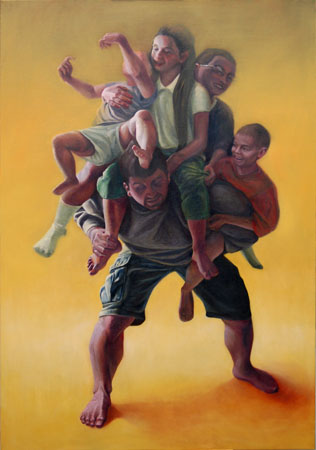 Since the last picture, I have finished the first chromatic layer over all of the flesh and reworked the background a bit. I’ve also gone back into some of the clothes. I’m hoping to finish up the clothes tomorrow (though I’ve got three crits lined up, so that may make it difficult to meet my goal). After that, I will be working to unify everything and vary the colors of the flesh a bit as well as putting in the hair and reworking the cast shadow. Once that is done… well, I should be pretty well done with the painting. Good thing too, as they are due on the 12th of May. Graduation is right around the corner.