There is no doubt in my mind that a hundred years hence, Vincent Desiderio will still be counted among the greatest artists of this generation. It has been my good fortune to be able to interact with him on a number of occasions this semester. About a month ago I had the opportunity to visit his studio where he had a number of paintings in progress… 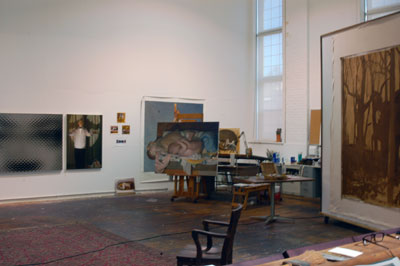 Tuesday last week he came to the Academy to give a clinic. The intended format was to have students bring in works which were pretty far along, but with problems that had no clear solution, and then watch how an artist like Vincent would solve those problems. As it turned out, he had quite a lot on his mind that day and spent a considerable amount of time discussing art in general. Although it is always useful to see another artist painting, I doubt we were any the poorer for the change. Over the course of the day, I took over a eighteen pages of notes, which is not to say that he lectured the whole time. Indeed, he showed us how he would begin a study for a larger painting as well as working on a couple of student paintings. In retrospect, it seems criminal to me that we students didn’t have the foresight to record him. Truly, I wish I could listen to his talk again and I’m sure there will be countless times in the future when I would have enjoyed hearing what he said that day.

Hopefully, this posting will help to pass on some of the benefit I received, as well as crystalizing the salient points for myself. What will be lost, I’m sure, is the personality of the speaker. Vincent has a generous and sincere disposition, and his excitement about painting is contagious; it is a joy to experience. I don’t pretend to have the skill necessary to convey his animated speaking personality in an abbreviated written format; on that account I must beg pardon. However, there were insights about art and painting relayed to me that are not for me alone. Given the state of the larger art world, this type of understanding needs to be disseminated.

As you can see, the breadth of topics broached was wide-ranging. Some of the ideas I had encountered before, but much of it I have never heard from anyone else. One particular point struck me and I couldn’t get it out my head for several days, the part about assuming that one is mediocre and striving to overcome the limitation. It is a well known phenomenon that the vast majority of people consider themselves to be above average at certain skills. By way of example, most people consider themselves to be above-average drivers.

Though I can not claim to have know many truly exceptional people, it seems to me that those I have come in contact with are never satisfied with their own output. They know that they have the capacity to produce something better than they have, and that knowledge burns them as much as it drives them. It seems to me that admitting something as sufficiently past the mean is a way of accepting a limitation. The distance between an above-average man and an exceptional one is infinitesimally small and yet it makes all the difference in the world. It seems to me that nowhere is the difference more obvious than in the selection of yard sticks they would use to measure themselves.

The burden weighs on me….

Oh, I made figures as well to help illustrate the difference between the classical and the romantic light models. The temperature transitions in the classical model are key to turning the form. They can run warm, cool, hot, cold; or they can run cool, warm, cold, hot. Normally, the shadows are opposite the temperature of the light. That is to say, warm light (like sunshine) generally gives cool shadows where cool light (like most artificial light) gives warm shadows. Vincent suggested that the shadow mass should remain neutral rather than follow the logical progression of alternating temperatures, since it must reflect the ambient color of the environment, which is more likely than not to be neutral. 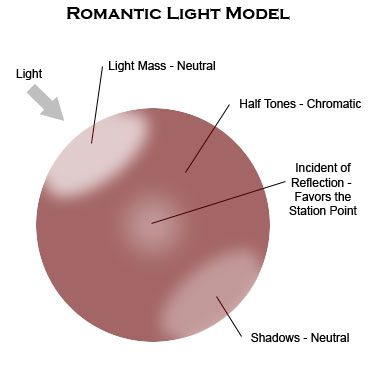 Had some visitors at work today.