Things have been rather slow lately, a bit like watching the paint dry. Perhaps that is a bit of an exaggeration, but I have been waiting for the underpainting to be sufficiently dry to accept an isolating glaze. Here’s a picture after a glaze of terra vert with the lights wiped-out. 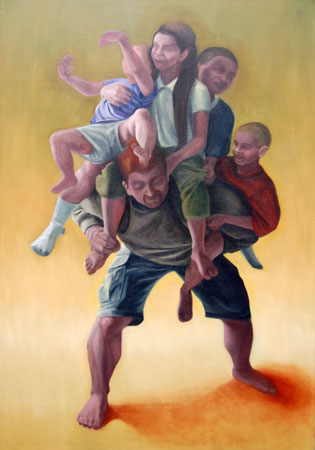 Now I need to give it a day or two to allow that layer to dry and then I will begin to repaint the entire work, but using a full chromatic palette. I’m really looking forward to that, as it has been a bit frustrating, waiting for the materials to be ready to work. I can see why it is advantageous to have several paintings in progress at once, though it doesn’t make a whole lot of sense for me to start something new at the moment: I’d just have to ship it back to Oregon in a couple of months.

I have been keeping busy with my free time of late. Been catching up on some reading: I just finished Gods and Legions by Michael Curtis Ford. It was good enough that I’ll have to seek out his better known work, The Ten Thousand. If anyone is interested in Greco-Roman historical fiction I’d also recommend Steven Pressfield’s work in general, and Gates of Fire in particular, which deals with the unforgettable Battle of Thermopylae.

I’m also nearly done with a history book about the ancient Greeks called Sailing the Wine Dark Sea by Thomas Cahill. Cahill’s work deals with the incalculable debt Western civilization owes the Greeks. It’s a interesting read, though I think I prefer Paul Cartledge’s treatment, particularly with regard to the representation of the Lacedaemonians (a.k.a. the Spartans). Cahill dismisses them as xenophobic warmongers, the ancient equivalent of modern-day North Korea. While not patently false and descriptively tangible to the modern reader, it is overly simplistic. Moreover, if it were not for the military prowess of the Spartans, the Persians would have destroyed the entire Greek civilization, and the Western world would look nothing like it does now. But I digress…

Being in the big city, I felt that it was my obligation to get out to some of the museums with my spare time as well. Of late I’ve made a couple trips to the Met, as well as the Cloisters. If I may offer some advice, if you ever find yourself in NYC and wanting to visit the Met, consider going on a Friday or Saturday evening. The museum is open late both nights and the crowds are significantly lessened. However, the best part of going at night is to view the spectacularly dramatic light used in the sculpture courtyards. Here’s a shot of one of the greatest sculptures of all time, Carpeaux’s Ugolino and His Children. 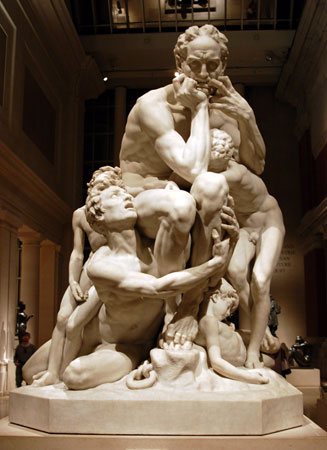 There are a couple of noteworthy events at the Academy as well. First, a salon show of faculty and few alumni works is currently showing there. There’s page on the Academy website with a few pictures as well. It’s really treat to see the work of our mentors. Speaking of mentors, Vincent Desiderio gave a clinic this past Thursday, but that deserves a post all it’s own…

A couple of Pics from Week 11