I know that it seems like the only thing I work on these days is the diploma project—even I feel that way most of the time. But the truth is that I am still taking other classes. One of these is an Advanced Figure Structure class taught by John Horn. We’re doing a life-sized portrait in water-based clay in that class. Here are a couple of pics. John had me significantly rework the chin right before the end of class, which is why it looks less resolved than most of the rest of the sculpture. It’s really amazing to learn how narrow many of the forms of the face actually are. 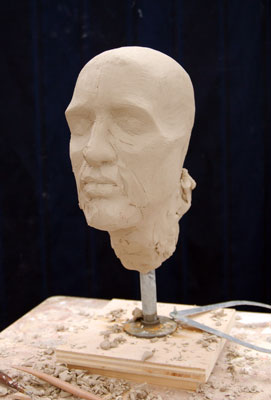 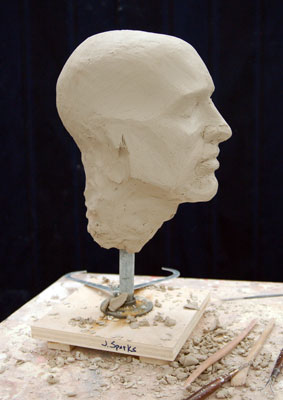 Next week, I’ll need to resolve the chin and mouth as well as add ears and hair, and define the neck. This class is excellent—I would recommend a life-sized clay portrait to anyone who really wants to get a handle on the planes and forms of the face. Having a tactile memory of the features is incredibly useful for drawing and painting.

With that segue, it just so happens that after spending six hours sculpting the head on Mondays, I have a portrait drawing class on Monday evenings. Mondays are all about rendering the head, which is time that could not be better spent, as far as I’m concerned. Still my weakest area, though between sculpting with John Horn and drawing with the very energetic Dan Thompson, I feel that I’ve definitely gained facility with facial features. Here’s a drawing we did last night; I think I spent about 40 minutes on it. 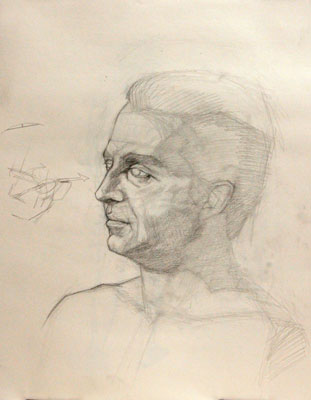 The Dan Thompson portrait drawing class is particularly fascinating to me. So much of what is taught at the academy is the conceptual framework for creating forms. You learn about structural drawing, i.e. rendering cubes and spheres and cones and using these forms to build more complex shapes. You learn about anatomy and perspective. With these tools, it is possible to render anything, from any point of view, and with any lighting condition. It is extremely liberating, but requires a great investment in education. Even then, forms tend towards idealization or even simplification. One simply cannot anticipate all of the infinite subtleties of the human figure in imagination.

The other school of rendering is completely about perceptual information. One does not necessarily have to know what one is rendering, as long as you are able to see the shapes in the light and shadow, and render them accurately, proportionally and tonally. Artists in this camp can render whatever you put in front of them very accurately. However, they are limited to only what can be put in front of them to copy.

It occurs to me that the best technical artists seem to be those who have both sets of tools. They tend to work from the model, but they are thoroughly versed in structural drawing, anatomy and perspective, and therefore know exactly what each and every form they are perceiving is, and why it looks the way it does. They are able to push the perceptual drawing past the point of pure observation because they understand where the important elements of the form occur, and can therefore emphasize them to create greater clarity.

Really, drawing is a language of description—the important part is not democratically documenting the perceptual phenomenon of light, but conveying the information of the experience of viewing the forms and light to the viewer. Sometimes this means that the artist needs to be able to explain things they can’t actually see, because the viewer won’t understand the drawing (or painting or sculpture) if those elements are not sufficiently described.