I haven’t posted much this month, so I thought I would wrap up February with an overview of the sock knitting marathon, and a mini-tirade about yarn availability and service.

First up is a portrait of Jeremy’s finished Trekking socks. These are currently wending their way across the country in the good company of granola and banana bread. I used Priscilla’s Dream Socks as the pattern, #0 bamboo needles, and just under one skein of Trekking (yessss!) in a seemingly discontinued colorway. I based the sizing on some well-fitting socks that Jeremy left at home, but of course I’m still agonizing over whether or not they will fit. Cross your fingers! 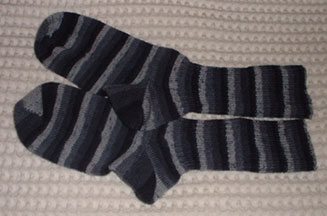 After finishing these socks, I cast on for a pair of Pretty Comfy Socks in Alaskan Blue Esprit from Elann.com, just for a change of pace. So far so good. 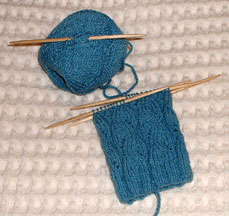 After two pattern repeats, I was ready to start a second pair of gray Trekking socks, this time for my dad. (I’ll work on the Comfy socks whenever I need a break from the toothpick needles and stockinette/ribbing.) These are nearly the same as the ones for Jeremy—same pattern, yarn, and needles; slight adjustments to number of stitches. I decided to carry the ribbing down onto the instep for these sock, just for a little variety. I should note in passing that this is a great pattern, particularly since it is a master pattern with a huge range of sizes and gauges. Since I have knit socks with Priscilla Gibson-Roberts’ short-row heel and toe technique before, I barely even had to look at the pattern, which was nice. I still don’t much like grafting, though, and there is more of it with this pattern than in the standard paired toe decrease. As of tonight, I am about an inch from starting the heel of the second sock. 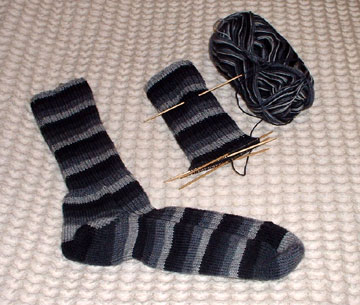 Also for variety’s sake (ahem), I managed to start a pair of socks for my mom, in Regia Jubilee Colors #5466. I am doing these toe-up, with short row heels and toes, to avoid grafting; I used #0 needles for durability in the foot, and switched to my lovely rosewood #1s for the cuff. After taking this picture, I actually finished off the sock, and am ready to cast on for the second one (but not until after I work the heel on my dad’s second sock, promise!). 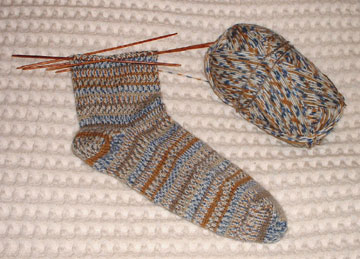 I keep hearing so much about Trekking that I asked my mom to see if she could track some down in Littleton (more re: Salem as sock yarn vacuum later). She did, and in husband-friendly (non)colors, though I think this is a printed self-striping colorway that is atypical of Trekking, so the quest continues. As for the yarn itself, I was pleased with it. I had little trouble with splitting, and it worked up into a nice solid—but not stiff—fabric that promises to be durable. Time will tell. It is definitely a bit scratchy for my sensitive skin, but I’m going to work up a swatch with my leftovers from Jeremy’s socks and wash it to see if that will soften it up at all. If so, I may use my third skein of it to knit a pair of Jaywalkers (after two pairs, the plain gray stripes are starting to lose my interest).

I liked the Regia Jubilee Colors a lot more than I thought I would, based on how it looked in the ball. The photo above is a little harsh. As for the self-patterning, it is lovely, but too busy to sustain anything but straight stockinette. I’m not sure if it was just because I have been knitting all these Trekking socks on #0s, but when I started the toe on #1s with this yarn, it seemed a bit loose, though that isn’t a problem on the cuff.

And now for a mini-tirade, courtesy of Salem local yarn stores:

I walked to the closer of Salem’s two yarn stores on Saturday (it’s about a mile and a half from my house; the other one is out of walking distance), after stupidly fracturing one of my bendy little bamboo #0 toothpicks. Since I had to walk all that way anyhow, I decided to make the most of the trip and get some more sock yarn, either in neutrals for Jeremy and my dad, or pretty handpaints for me and my mom, and whoever else I know that would like pretty handpainted socks. Um, no. Although they had the DPNs I wanted (I love you, 5″ Britanny Birches!), the sock yarn selection was pitifully lacking, even more than usual. A little self-patterning Opal, Regia, and Cascade Sassy Stripes, some Wildfoote, and—count ’em—exactly two skeins of CTH Supersock Merino, in colorways prominently featuring orange (no thanks). They carry absolutely no other options for handpainted sock yarn–Koigu, Lorna’s Laces, Fleece Artist, Mountain Colors, Socks that Rock, anyone?–or even any cotton yarns, such as Fortissima Cotton or Fixation. Not to mention that there were virtually no neutral, simple options for fussy husbands, other than plain old black (bleh!). When I brought up this sad state of affairs to one of the owners, she acted as though she was unaware that there were even other options out in the world than the yarns she carried in her store. This non-helpful, blase response is what I get every time I try to shop there (laceweight yarn? what’s that?), and I’ve virtually (heehee) resorted to shopping online for my knitting needs, or asking my mom to browse her better-stocked Denver stores.

At any rate, I really wanted to pick out some sock yarn in person, so I ended up getting two balls of Opal Rainforest yarn in Owl and Ladybug. The Owl was the most neutral yarn I could find (still too fancy for Jeremy, though), and the Ladybug made me think of my mom and grandma, so that will eventually be socks for one or the other. 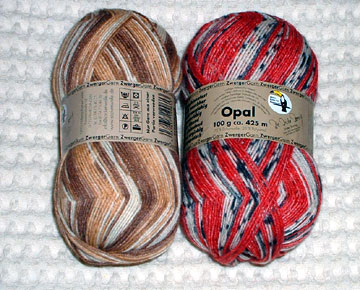 Last but not least, I want to comment briefly about the casualties of this recent bout of sock knitting. I already mentioned the sadly fractured bamboo needle, a foolish mistake on my part in which I bent over to pick up an escaping ball of yarn with my knitting on my lap. The broken needle is one of my Lantern Moon rosewood #1s: it snapped before I even had a chance to knit with it or put any pressure on it whatsoever. I was naturally dismayed, and wrote to the company to find out if they could send me a replacement needle. They promptly did so, and sent not only one replacement, but a whole new set, so now I have 4 extras in the event of future catastrophes. Now that’s good service.