I have been pining for a digital SLR camera for a while now. I’m not sure if Julie simply got tired of my complaining about the noise levels (noise refers to the amount of digital artifacts or bad data in the image) of my old Olympus point-and-shoot, though I’m pretty sure that had an effect on the end result. Perhaps it was just in the cards, given that the largest camera trade show is occurring later this month, which means that all of the major manufacturers are going to be announcing new digital cameras. This also means that major retailers need to get rid of surplus stock of the current generation of cameras to make room for the soon-to-be-released models. One might expect that waiting until after the show would be the optimal time to purchase; however, experience has taught me that to survive in the internet age, large retailers must shed most of the bulk of their stock before the replacement models hit the shelves. Ironically, this mean that the ‘older’ models actually become more expensive after the announcements.

What this all means is that I was able to find a deal (discounted price with multiple coupons) on a Nikon D50 kit (camera and single lens) which was good enough that it was worth scraping together the money to make the purchase. The bargain being that said camera would have to suffice simultaneously as a birthday, Valentine’s day, President’s day, St. Patrick’s day, Spring Break, Easter, April Fool’s Day and graduation present.

As Paul was about to come to NYC for a visit, and I have only a few months left in such a photogenic locale, it was possible to justify the expense. It sounds easy now, but poor Julie had to listen to me debate the relative merits of all the options back and forth for several days (or was it months?). 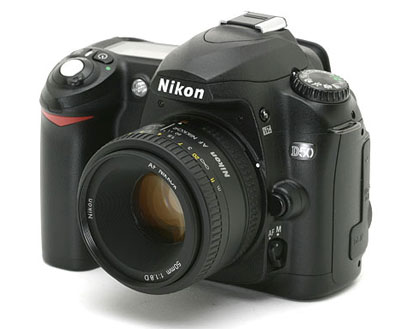 I am also very much indebted to Julie’s parents, Nelson and Rita, who sent me a generous check for my birthday. That was used to subsidize the cost of the new camera.

Don’t know if anyone out there noticed—perhaps not since the photos on the web are typically quite small and of reduced quality (optimized for download speed rather than image quality)—but all of the photos I’ve taken since February 2nd have been with the new Nikon camera. Having used the camera for a couple of weeks now, I must say that I couldn’t be happier with the purchase. It is an excellent camera, especially considering the cost. If you’re in the market, as they say, I do recommend picking one up. There’s also an exceptionally extensive review online, if you’d like a second opinion.

I feel like I should show a picture at this point, so here’s the sunset as it appeared out my window on St. Valentine’s Day. Even though it is not a larger image than I normally post, it is a higher quality image so it may take a few seconds to load. But, as they say, the view is worth it. 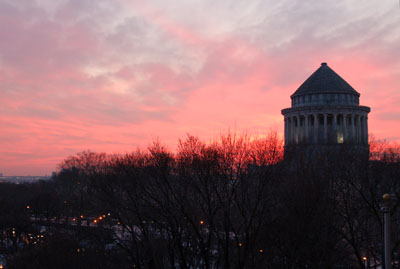