I have not been idle the past couple of weeks. I completed head studies of all the principle characters in my composition and I have moved on with the final support, finally getting into some real painting today. Here are the head studies: I’m really pleased with the way the one of Tayler turned out; the others all have small issues, but it was enough to do the transfer. 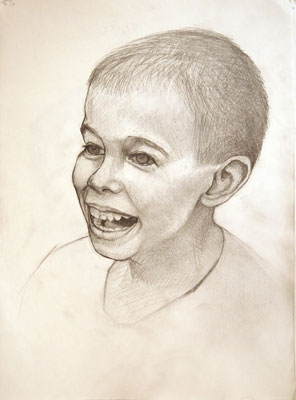 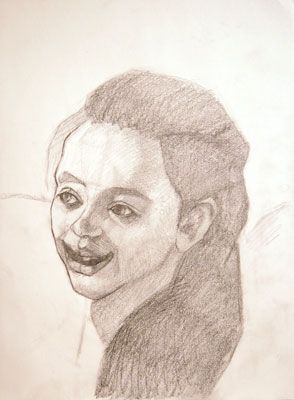 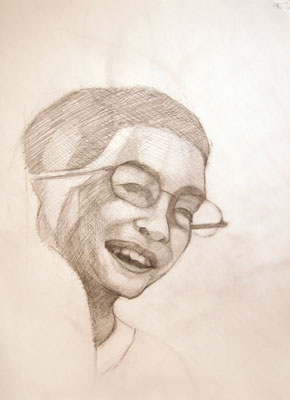 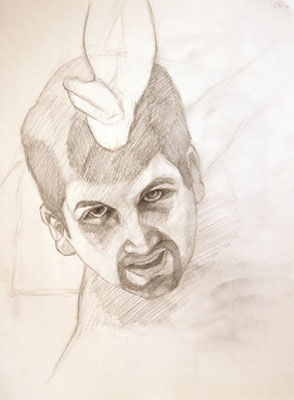 Once the head studies were completed, I ran them through a copier to reduce or enlarge them to the correct size for the final support and then transferred the important points onto the canvas. 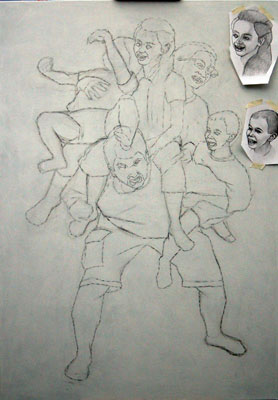 Once that was done I put down a ground tone. There really are only a couple of occasions for one to work on a white canvas; for example, when working in an impressionist vernacular. For most paintings, it behooves the artist to create some non-white tone to lay down thinly. The tone can really be anything, but it can be helpful to set the mood for the entire composition. Often it is helpful to think about what the dominant hue and value of the finished work will be and then choose the compliment as the ground tone. It’s probably difficult to tell from the photo, but I’ve mixed up Blue-Black with Yellow Ochre and Cremitz White to make a light blue-green tone. While nothing of this color will be apparent in the final image, applying the ground tone in a very streaky and broken manner can enhance what is sometimes referred to as ‘the mystery of surface’ in the final layers. That is to say, they help to build up an uneven texture than makes the final work more interesting to look at, though most would be unable to say why. 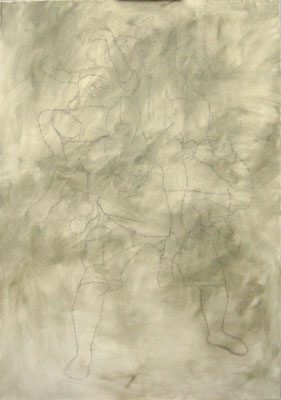 Once the ground tone dried, I was able to start in with some real painting. There is no art to laying in the ground tone: it should be done quickly and without a lot of pre-mediated brush strokes. Starting a wipe-out is similar. Take two complimentary colors to create a neutral brown color. It helps to select a warm and a cool color and not mix the two completely so that some portions of the canvas are randomly slightly warmer and others cooler. Alizarine Crimson and Sap Green are a good choice; here I’ve used Transparent Red-Oxide and Blue Black. Again, streaky and random brush strokes are desirable. Once that is on the canvas, work begins in earnest. Here I’ve spend a couple of hours working out some of the lights and darks for the overall composition. One can spend a great deal of time working on the wipe-out, almost like working up a finished grisaille painting (think Mark Tansey). 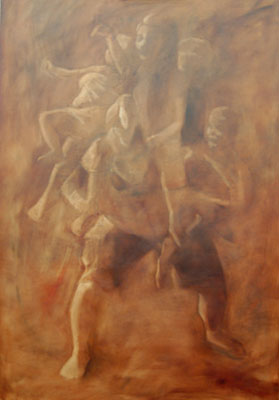 Personally I’ve found that the wipe-out is useful for starting to correct drawing problems, but that as I move on to the more opaque layers of paint I tend to cover it completely, so I’ve started to shy away from doing a very intricate wipe-out (though you may note that I have moved a number of contour lines in this layer).

I spent the rest of the day getting mixed-up. That is to say, I mixed out a number of half-tones of a venetian palette that Martha Erlebacher taught us. Basically it’s a 5 x 3 grid of paint tones the top row is made by adding Indian Red to Cremitz White, then that row is split down and Ivory Black is added to neutralize the chroma and add some lavender colors to the grid. I’ll take a picture tomorrow and add that; it’s much easier to understand with a photo than in words.

Update: here’s a photo of my palette. 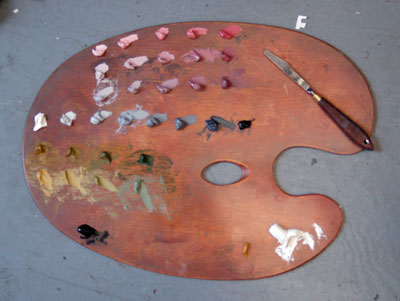 I used a fair amount of thinner in the wipe-out layer, so hopefully it will be dry enough to paint on tomorrow. I’m planning on using the venetian palette for the flesh, and a true grisaille for the fabric. Still not entirely sure how I’m going to put in the background, though I’ve been leaning towards a old-master green made from Yellow Ochre and Ivory Black (yes, black and yellow make green— didn’t they teach you that in primary school? 🙂 )