I know that Paul is a big fan of the perennial college favorite Saturday Night Live. Unfortunately, SNL tickets are even more difficult to come by than Spamalot tickets. So I did the next best thing and reserved tickets for the Upright Citizen’s Brigade Theater. Much like Chicago’s vaunted Second City, it is a troop of improv comedians who weekly tickle the funny bone of New Yorkers. It might not be SNL, but there were two current SNL regulars (Jason Sudeikis and Weekend Update co-anchor Amy Poehler) there on Sunday. The other four comedians were excellent as well. I’ve been to the UCB theater twice previously and it is always a good time. Paul believes it may have been the highlight of the trip. I’d speak more on the content, but as Amy admonishes, the freeform nature of improv comedy means that, though it seems funny when present at the time, it is absolutely not funny the next day when trying to explain it to your friends.

But that is how we capped off Sunday night. Earlier Paul and I had a whirlwind tour of lower Manhattan. We started off in the Upper West Side, and since Grant’s Tomb is directly across the street from my flat at the International House, we made a brief stop at the largest tomb in North America. We also made a quick stop to see the main quad of Columbia University. Here’s a picture of the library of that esteemed institution. 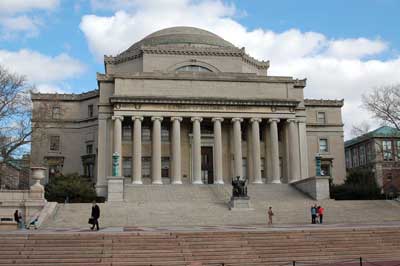 Then a 40-minute subway trip down to the Triangle Below Canal street aka Tribeca. Since my school is there in Tribeca, I’m probably more familiar with that neighborhood than most others in Manhattan.

We started down West Broadway to reach Ground Zero. I always feel a bit like Doubting Thomas when I head down to see the scar where the Twin Towers no longer reside. The site is always busy, though, so apparently it is in human nature to need to personally experience the reality of a traumatic event. It is amazing to me that, given the extent of the damage, they were able to restore subway service so quickly (the New Jersey PATH trains come into the WTC site as do 2 major NYC MTA lines). Equally impressive is how little has been accomplished in rebuilding the actual site. It was one of the first places I visited in NYC and, to my eye at least, it look exactly the same now as it did nearly two years ago.

Not far from the WTC site is one of the most famous streets in all the world: Wall Street. We walked a couple of blocks down and saw the Trinity Church which sits like a capstone to Wall Street proper. Wall Street is so called because it was literally where the city wall was located back when New York was known as New Amsterdam (much like Canal Street is so called because that is where the city canal used to reside). The most interesting feature to my mind is how incredibly narrow the street is—it looks much like any normal town street, just wide enough for two vehicles to move through (not that they actually allow anyone to drive on many parts of Wall Street any more).

Right after the church, one happens upon two of the more interesting buildings there, the Federal Building with a statue honoring George Washington on the steps. 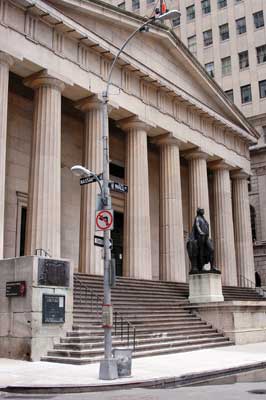 And of course the New York Stock Exchange. I’ve been too timid to take pictures of this NYSE before; there have always been heavily armed NYC police before the building the other times I’ve been and I wasn’t sure they would take kindly to me pointing a camera in their direction. However, and perhaps it was simply because it was a Sunday, Wall Street was surprisingly unoccupied (meaning there were probably only about 40 other people there). Here’s a picture of the facade. 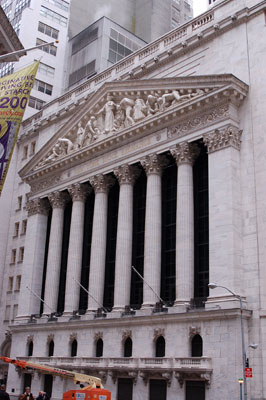 We then walked over to see City Hall and the Manhattan side of the Brooklyn Bridge. As interesting as the buildings are at City Hall, there aren’t very many good vantage points from which to take photos. There is, however, a very interesting building which is also easy to photograph right next to City Hall, the Hall of Records, renamed the Surrogate’s Courthouse in 1962. I used to think that I was simply not interested in architecture, but after living in NYC for the better part of two years I now know that I simply wasn’t interested in the bland neo-fascist architecture that one finds for federal buildings on the West Coast. This Beaux Arts style building is really beautiful. 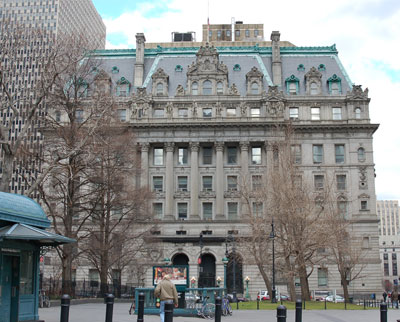 We then moved further south to Battery Park (so named because that’s where the gun batteries to defend the island previously resided). It’s the most southern portion of Manhattan and also where one catches the ferries to the southern islands (Staten, Liberty, Ellis, etc…). In addition to some of the other other monuments at Battery Park, there is this steel and bronze sphere. 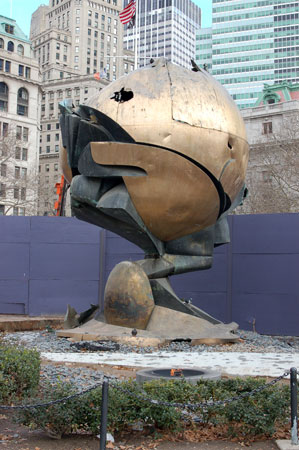 It was once the centerpiece of the main fountain at the WTC site. Though obviously damaged, it has survived somewhat intact and has been installed in Battery Park as a temporary memorial to the victims of the 9/11 attacks. Perhaps you can just make out the eternal flame at the base.

We hopped on the Staten Island Ferry and took a ride down the Hudson and past the Statue of Liberty. We then promptly disembarked and turned around and got right back on the ferry for the return trip to Manhattan. Here’s the requisite photo of Lady Liberty. 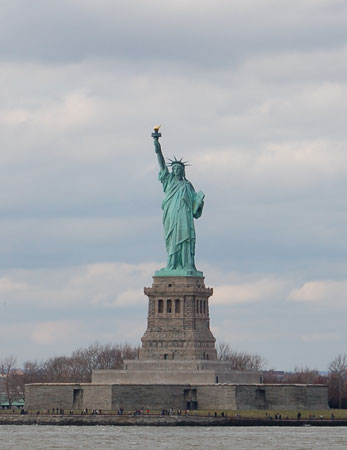 After returning on the ferry, we headed across (okay, under) the East River to Brooklyn. I lived in Brooklyn Heights last year and there is an excellent view of lower Manhattan from the promenade in Brooklyn Heights. We also wanted to meet up with Miss Jee Lew, who was going to be accompanying us to the UCB Theater later that evening. Though there aren’t many good places to shoot the Brooklyn Bridge from the Manhattan side, the view from the Brooklyn side is much more photogenic. Here’s a shot of Paul and Jee at the foot of the Brooklyn Bridge in Brooklyn. 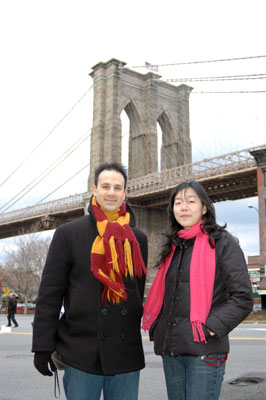 Also at the foot of the bridge is one of the most famous pizza parlors in NYC. Grimaldi’s is known for using a real coal-fire brick-oven to cook their pies. (Apparently they can still do this because they are grandfathered in.) Anyhow, not wanting to miss out on a real NYC pizza, Paul ordered up a half-n-half. One side had sausage, pepperoni, olives, mushrooms and garlic — the other had sun dried tomatoes, ricotta cheese (a NYC favorite), fresh basil and garlic. I had previously had a pizza at Grimaldi’s and it had cooked at such a high temperature that the cheese started to separate… fortunately it appears that was an isolated bad experience. The pie we had on Sunday was absolutely fabulous. If you ever do manage to go to Grimaldi’s make sure to order the pizza with garlic on it—it made a huge difference. Exceptional pizza. 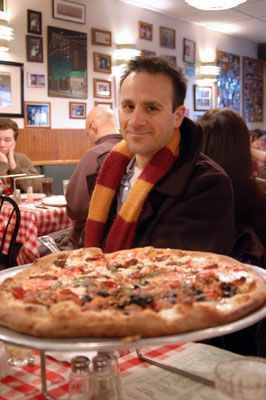 After devouring every last bit of the pizza, we found that we still had some time to kill before comedy hour at the Upright Citizens Brigade. So we continued our gluttony by continuing on to another exquisite food stop for some dessert. Amy’s Bread is one of the better bakeries in NYC. Jee got a cupcake, Paul opted for the Black and White cake, and I, what else but the German Chocolate cake. Amy’s has some of the best cookies I’ve ever tasted so I also picked up a couple of cookies for us to snack on later. If you are ever in NYC, don’t fail to pick up one of the amazing Kitchen Sink cookies at Amy’s—I promise you won’t be disappointed.

We then did a bit of window shopping in The Village. We happened upon a Mediterranean food’s store called Oliviers & Co.. The manager of the store, Toni, went out of her way to have us taste some of their fancy olive oils and exquisit balsamic vinegar. Next time Julie and I need balsamic vinegar, I know where I’m going to be ordering it. The olive oils were also sumptuous and Paul couldn’t resist picking up a can to bring home with him.

With our tummies full of pizza and cake, there was nothing left but to continue on to the comedy club and laugh ourselves sick. A most memorable and enjoyable day.