Though we spent some time planning out his visit, ironically, Saturday turned out to be the most free-form day we had together. Personally, I have never been a big fan of musicals. There are, of course, exceptions that I do enjoy, but for the most part they lose me when things go badly and then everyone breaks out into song. Call it an inability to suspend my disbelief, but it shatters the magic for me. As a result, I’ve never taken the time to figure out how to get Broadway tickets. Paul, however, felt that a trip to NYC might be considered incomplete without a show, so after speaking with Tara and Loren (who have been good New Yorkers), they let us in on a way to get same-day tickets at 50% off. Sounds too good to be true, I know, but I assure you it is all on the up-and-up.

Apparently, the tickets that aren’t sold in advance are given to a theater development group to sell, and are then sold in a first-come-first-served fashion in Times Square on a cash-only basis. Again, you don’t know what will be available before you go, but we decided to give it a shot and see. Spamalot, the musical based on the seminal British comedy, Monty Python and the Holy Grail, is seemingly everyone’s first choice, however, as we were informed that they never have those tickets through this venue.

Our second choice was the sort of fuzzy sounding, Avenue Q. The most salient way to describe this musical would have to be “Sesame Street for grown-ups.” I’ll let you read the full description on their website if you are curious to know more and haven’t heard of the musical. Suffice to say, I never in my life expected to see muppets engaging in intercourse. To be fair, the show really does have a purpose (inside joke for those who have seen it) and does a good job of portraying the anxiety of graduating from college and trying to find your way in the world. Hit numbers included, “Everyone is a little bit racist,” “What do you do with a BA in English?” and who could forget “The Internet is for porn.” Despite the sound, it is quite an excellent show and they did win a number of Tony awards for the production.

As for my feelings about musicals, I have to say that I can recognize that the talented performers on Broadway are a cut above and I can appreciate why people would love the experience of going to a show, but for me, I’d still prefer a good (song-less) play.

The requisite trip down to Times Square to procure tickets afforded Paul and I the opportunity to explore one of the most famous blocks of NYC. Here’s a picture of Paul in the middle of 42nd street. Bear in mind that no one picture really does justice to the sensory-overload that is Times Square—you have to understand that it pretty much looks the same in every direction, with several Jumbotrons and moving images in every cardinal direction. 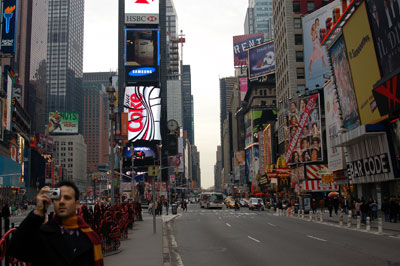 We also stopped in the Times Square Toys ‘R’ Us, which has a full (and working) ferris-wheel inside, not to mention a life-sized animatronic (and vocal) T-Rex. 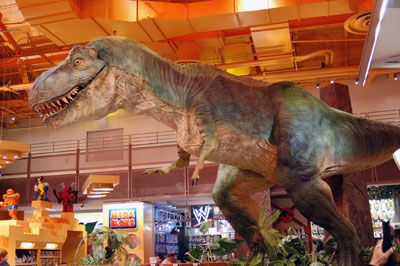 After the show, we returned to my flat in the Upper West Side to look up a restaurant the Paul had heard of from one of his friends back in Oregon. It is a little Peruvian place in the Upper East Side called Pio Pio. What a treat. We shared a combo meal that included a full rotisserie chicken, an avocado salad, saffron rice with beans, fried plantains (a relative of the banana) with a oil-based garlic and basil sauce and lightly fried yucca (a relative of potatoes). Everything was wonderful, the fried plantains were my favorite, especially with the garlic sauce. Paul really liked the yucca, which were not unlike eating a really thickly textured baked potato. The chicken itself was wonderful and juicy and was served with another sauce which was extremely spicy by itself but on the chicken seemed perfectly mellow and really enhanced the flavor of the rub they had cooked the bird with. There was more food than the two of us could eat, and the most amazing part was that we had it all for less than thirty dollars.

A Broadway show and dinner… no wonder Julie was jealous. The only way it could have been better (for me at least), is if she had been there to share the day with us. I’ll have to try to recreate this experience when she comes back out for graduation in May.