Well, as you may know, my excellent-good friend Paul has taken some time out of his schedule to visit me here in New York City — a.k.a. NYC, the Big Apple, the City, Old-New-York, New Amsterdam, Gotham City, Metropolis, the Capitol of the World and Ground Zero. Friday was the first full day of NYC sightseeing. Here’s an abbreviated accounting of some of the mischief we’ve managed… with subsequent days to follow…though due to the way postings appear on the blog, you will likely be reading them in reverse chronological order. I hope that isn’t confusing.

Started off with day having breakfast at what has got to be one of the best breakfast restaurants in the known universe. I have long held that the ubiquitous pancake is more-or-less the same no matter where one acquires it (though the same cannot be said for syrup). However, the food at a little place on Amsterdam and 83rd has set me straight. Julie, Paul and Jee (the three people I’ve shared with the knowledge of this knowledge) all will heartily attest that the name of the establishment is quite a bit of an understatement—the breakfasts there are more than just “Good Enough to Eat“. In fact, the name really only works when eating somewhere else and realizing that breakfast anywhere else is emphatically NOT Good Enough to Eat. The food is simply amazing. Even something as commonplace as an omelet is surprisingly exceptional there (so light, so fluffy). Just look at their online menu… but, if you should find that my ramblings are simply too weak to persuade, consider this: As Paul and I were enjoying our wonderful meal, who should happen into the restaurant but Kevin Bacon. He sat not two tables away and had breakfast, and with a name like Bacon, you just know that he’s only going to eat at the best of breakfast places. (Though, sadly, Paul points out that our Six-Degrees-of-Kevin-Bacon number has now dropped precipitously.) 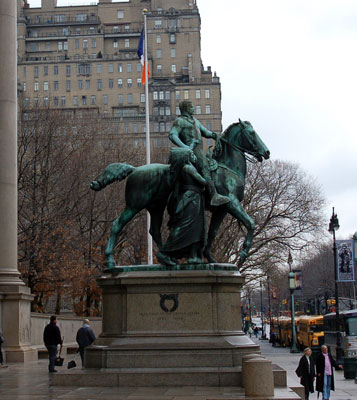 After having breakfast, Paul and I wandered over towards the park, stopping at the American Museum of Natural History on the way. Roosevelt played a large part in the founding of the museum and there is a large equestrian statue of him, led by two Native Americans, on the front steps of the main entrance. We really didn’t do anything more than pop our head in the lobby (which has a full brontosaurus skeleton, rearing up on its hind legs, no less). Paul will return and visit the museum properly on Monday while I resume my regularly scheduled classes. Julie did the same thing…I may have to just take a day and go back on my own sometime. I do wish there was time in my schedule to join him. Here’s a picture of Paul looking at one of the skeletons in the lobby. 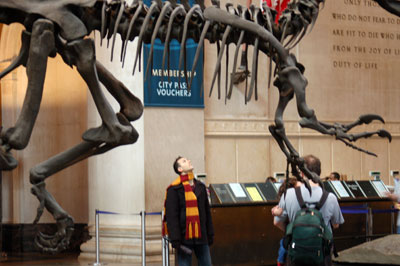 After, we walked accross Central Park and made our way down to what is probably my favorite museum in Manhattan, The Frick Collection. Unfortunately, the famous Ingres portrait was on loan to a show in London, as is Sargent’s Madame X, from the Met. If they are both destined for the same show, I wish I could be in London to see it. No matter—the exquisite Holbeins, Titians, Rembrandts, and the inimitable Bellini were still accounted for. A few well-spent hours later (sorry, no pictures allowed in the museum), we emerged and decided to continue our stroll down 5th Avenue on the Central Park side. We did a bit of window shopping when we reached mid-town, including a walk through the exorbitant Bergdorf Goodman. It seems that if money is no object, Bergdorf’s can set you up with a shirt, tie or scarf of any hue under the rainbow. The salespeople must have noticed that we were in fact not members of the group who can attest to the requisite stipulation and opted to let us window-shop unmolested.

Here’s a picture of the gold-plated equestrian statue of General Sherman which one may view in the south-east corner of Central Park, which is just kitty-corner to Bergdorf’s. 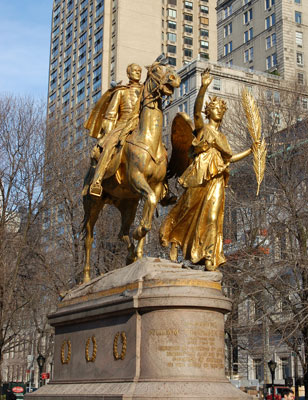 I think it is interesting to compare this equestrian statue to the one of Thedore Roosevelt on the steps of the American Museum of Natural History. Sherman is of course infamous for his march to the sea, during which he accelerated the end of the Civil War by razing every city he passed. It reminds me a bit of Truman, and the decision he faced, knowing that there was a way, unspeakable though it may be, to bring about a rapid end to conflict. Each man was haunted for the rest of his days with the worry whether the price they paid was worth the lives that were theoretically spared by their actions. But I digress…

Then further down 5th Ave. to St. Patrick’s Cathederal and Rockefeller Center. Some things in Manhattan are difficult to photograph, because one simply can not get far enough away to shoot the entire subject without there being something else in the way…. one must perforce be more creative. 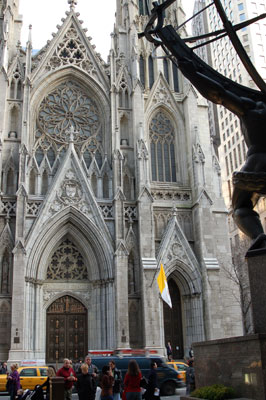 Then down to 42nd St. and the Manhattan Public Library. Okay, there are many, many branches of the Manhattan Public Library. But this is the mid-town research library. You may also recall seeing this building at the beginning of the seminal 80’s theater experience, Ghostbusters. It is a beautiful building, which also happened to be showing an exhibition of rare maps. We stopped in for a quick look at the cartography and learned some interesting things about the way the world was once perceived. For example, there seems to have been a long stretch of time where it was believed that California was an island off the west coast of North America. We also learned that Australia was once referred to as New Holland. Our most surprising discovery, however, was not on the maps, but rather when we learned that the Manhattan Public Library also had on display a copy of the Gutenberg Bible. It was a rare treat indeed to be able to see full extant copy (apparently there are still 45 copies left in the world) of the first printed book. Here’s a shot of a portion of the library. 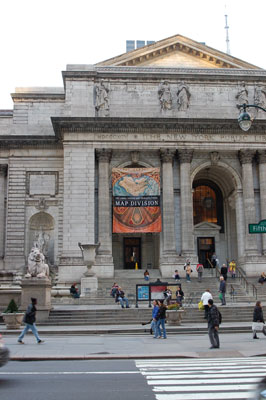 Friday nights, the Museum of Modern Art allows patrons to view their collection free of charge (interesting…is one still a patron when not paying?). Though we had little time before our dinner reservations with Tara and Loren (more on that to follow), we decided to stop in MoMA and view the most seminal works with much celerity. I’ve talked about MoMA before, so I won’t belabor the point, but suffice to say that as one of the first museums to seriously collect modern art, they have many of the most important works of the early 20th century. The hour we could spare was definitely short shrift, but it really was all we had.

Then back to the west side of town, to a restaurant in Central Park known as Tavern on the Green, where we met up with fellow Willamette alumni, Tara and Loren, who were kind enough to make the reservations for dinner to celebrate my birthday. What did I ever do to deserve such congenial friends? Oddly enough, we recognized the interior of the restaurant as also having been used in the movie Ghostbusters (the scene where Rick Moranis’ character is finally overtaken by Zuul, the demon-dog, and he every-so-briefly interrupts the dinner of the New York well-to-doer’s. Fortunately, our dinner was only to be interrupted by a slightly forward photographer. They seem to have a racket in selling personal snapshots of one’s experience at Tavern on the Green. Notwithstanding, the meal was excellent. And, as it was restaurant week in NYC, they had a prix-fixe menu that allowed us to enjoy a three-course dinner at a more affordable rate. Here’s a picture of the four of us after due fÃªting. 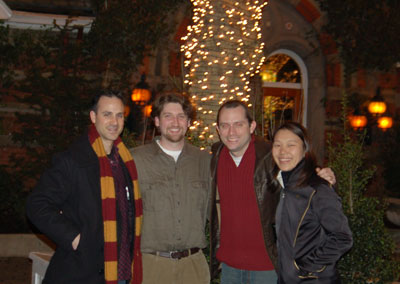 As our meal included a dessert, there was nothing left to do but to end the night with some British comedy. I retrieved my DVDs of the second-funniest British comedy ever conceived, Black Adder, and we watched a few episodes from the excellent second season before calling it a night.

Two museums, and a walking tour of central Manhattan seems a good way to spend a day in NYC.

Part of Being a Homeowner