I know it has been way too long since I posted on the blog, but I won’t make any excuses—well, other than Jeremy coming home for Christmas and my broken computer. 😉

To make up for my neglect, here is a backlog of cooking photos (mostly of the gazillion Christmas cookies I baked), and a bit of self-indulgent rambling about how the various recipes came out. (Click on the links to find the recipes.)

First of all, the candies. I made almond roca first. It came out slightly burned despite a much shorter cook time than specified, but that actually complimented the roastiness of the nuts and the bitterness of the dark chocolate. I got more compliments on it than anything else. I think this recipe was originally written out by someone who had made it so many times that they didn’t need to be specific. Now that I have made it once, I think I could do it properly with no problems: the heat should have been turned down to medium, I’ll know the light caramel color to watch for, and I’ll do a hard-crack water test when I think it’s done.

The coffee walnut toffee was less eventful, and a more detailed recipe (no coincidence). I had everything prepped in advance, and used the candy thermometer and hard-crack test to know when it was done, as it started out brown right off the bat (thanks to lots of dark ingredients). It came out pretty and quite tasty, with a satisfying crumbly crunch. 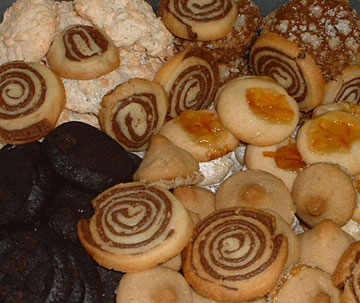 Korova Cookies: These were really easy to do, and made elegant little cookies. Mix up the dough, chop some chocolate, and then roll them into logs and stick in the fridge overnight. The dough was easy to work with, and firmed up nicely. These were lovely with ice cream, but they weren’t Jeremy’s favorite because they are sables rather than chewy cookies. I’ll keep making those gooey brownie cookies for him, I guess.

Chocolate Peanut Butter Pinwheels: Gorgeous cookies when they came out as intended, but so much trouble and frustration that I donâ€™t know if it was worthwhile. The dough was horrendous to work with, incredibly sticky even when chilled between waxed paper sheets: I ended up scraping it off the paper in chunks to reroll. It went from cold and stiff to sticky at (still darn cold) room temp within minutes. I finally wrangled it into submission with a liberal use of flour. As for the chocolate peanut butter filling, it melted easily in the microwave, but once it started cooling, it hardened rather quickly. I was able to get one log spread and rolled, but in the time between spreading the filling on the second sheet of dough and starting to roll it, the chocolate had hardened and refused to roll, instead shattering and breaking the dough. Plus, the dough softened more and stuck to the work surface, so it was a huge mess. I ended up just chucking the remainder all into a pile on a piece of waxed paper and squeezing until it was log-shaped. The pinwheeled dough broke apart somewhat as I cut it, so most of my pinwheels were striking in the middle and rather dilapidated around the edges. If I try this cookie again, I will probably add more flour to the dough, roll them out with flour, and I definitely wonâ€™t answer the phone while wrangling this dough (Jeremy called while I was rolling it out the first time and letting my filling cool, and my parents called while I was scraping the dough off the waxed paper and rerolling it; I should have reheated the filling some, but then it probably would have made the dough too sticky. Bah!)

Coconut Macaroons: This was the Dahlia Bakery recipe, and it came out perfectly. The only thing that threw me was the need to refrigerate the â€œdoughâ€ 8 hours or overnight. I made the dough at 4:30pm on Sunday night, so I just waited until something like 11:30pm and baked them anyway. These came out wonderfully light and moist, melting in your mouth.

Molasses-Spice Crinkles: This was my second time making these cookies. The first time the dough firmed up beautifully in the fridge, and the cookies baked up thick and chewy, with an extrordinarily sparkly sugar coating. The second time, I used light molasses instead of blackstrap, but did everything else the same. The dough remained sticky even after refrigeration, and baked up more flat and crisp, with less sparkle. They were good both ways, but I preferred the first batch, so I’ll have to get some more black strap and try it again. (I made these at the last minute because they use an egg white, and I needed one more after the macaroons to have three yolks for the thumbprints.)

Eggnog Thumbprints: This was an easy butter cookie dough; I added some nutmeg for interest, but it was still bland. The eggnog custard was tasty, but got buried in the cookie blandness, and dried up quickly, which was unappetizing. I sprinkled these with powdered sugar to make them a little prettier. For the last half-dozen or so, so I pulled out a jar of marmalade from the fridge and used that; it was a good pairing with the nutmeg, easily more successful than the custard. Not worth making again, but I do want to try another thumbprint variant.

Caramel Nut Acorns: This dough was very easy to work with, but I canâ€™t say the same for the caramel. I got the hard caramels it called for and they refused to melt in my improvised bain-marie. I tried lots of methods of delivery from the mixing bowl to the bottom of the cookies, but the caramel was so thick that I ended up just using a butter knife to scoop up a blob of caramel and smear it over the bottom of the cookie, then firmly dip it into the chopped nuts. So they didn’t look quite how I would have liked, and the caramel on the finished cookies stayed hard in my cold house. A good idea, but I probably won’t make them again.

Whew, that was more than enough rambling for one post. I’ll catch my breath and post the rest in a bit (and maybe a few recipes as well).