Well, I think I have recovered sufficiently from the jetlag to write coherently, and Jeremy sent me a few photos to post, so I suppose it is time to write about my first visit to New York City. I had eight days to visit and two to travel, and it all went by almost before I could blink. We scarcely had a moment to rest, but I know what we saw and did was just the tip of the iceburg, and I am already making a list for the next visit, when Jeremy graduates in May.

At any rate, I left Oregon very early on my birthday, the 21st. My friend Amy was kind enough to drive me up to PDX, a favor for which I am extremely grateful, no less because it turned out to be quite an ordeal to get there. Not only was it the wee hours of a foggy morning, there turned out to be two serious accidents in a row on I-5, one completely shutting down the northbound lanes and sending us on a time-consuming detour. Along the way, we were almost smushed by a semi and made it to the airport less than an hour before my flight.

Fortunately, the remainder of my travel time was much less nervewracking. I arrived safely at JFK, met up with my wonderful husband and a bouquet of Japanese irises, took my first (very long) subway ride to the International House and Jeremy’s room. We went out to a much-needed dinner with our friends Tara and Loren, and collapsed sometime after midnight.

The rest of the week passed in a blur because we were so busy. I’m thinking I should break this into a few posts, but since I know people have been waiting, this can be the one with most of the pictures. 🙂 Presenting “Five Museum Visits in 8 Days”…

#1: The Metropolitan Museum of Art

The first place Jeremy took me to visit was the Met. We spent my entire first Saturday there, over 8 hours of walking around. When we arrived, I was impressed and excited; by the time we left, I was exhausted, overloaded, and almost frantic because we didn’t even come close to seeing everything. Jeremy is so lucky to be able to come here repeatedly. He’s already posted lots of images from the Met, but here are a few more.

This room of the Egyptian wing was new to both of us, because it had been closed for repair to the waterworks on Jeremy’s previous visits. Pretty incredible to walk into a room and find an entire Egyptian temple. The Temple of Dendur was a gift to the United States for our assistance in saving a number of important historical sites from flooding in the 1960’s. 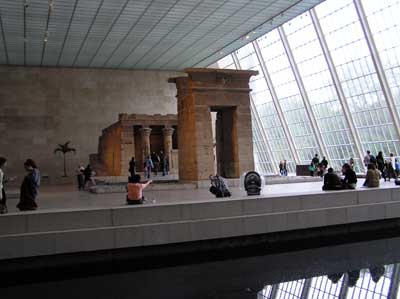 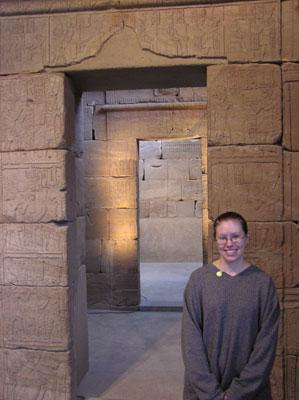 We took other photos in the Egyptian wing, but Jeremy didn’t send them to me, so here are a few other links to the Met website: Fayum portraits are a personal favorite of mine, and this fragmentary statue from the Amarna period, which may depict Nefertiti, is lovely despite the extensive damage.

We spent lots of time with the Greek art, looking at kraters and lechythoi and steles, but I don’t have any of those photos to hand. Here, however, is the Metropolitan Kouros an important type of Archaic Greek sculpture that shares a certain kinship with Egyptian statuary in its stylization, stiffness, and frontality. 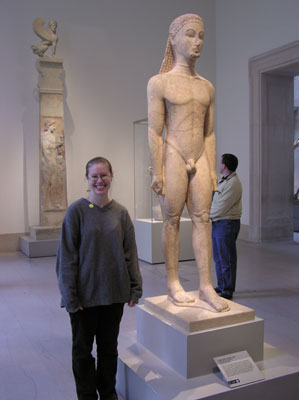 And a metal griffon’s head that seemed somehow familiar: 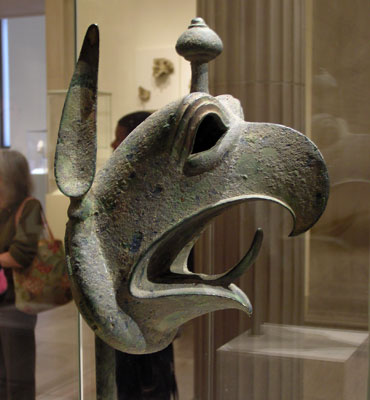 Jeremy took me through most of the major collections: American and European painting and sculpture, Early Christian and Gothic (anything I’m leaving out, honey?). We particularly liked the perspective of this little relief carving of the Last Supper: 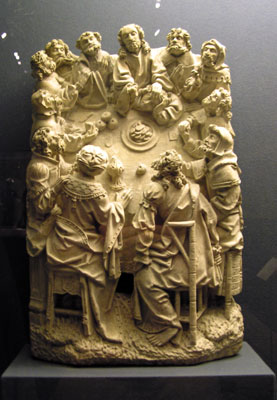 and we spent quite a while gawking at the armor collection: 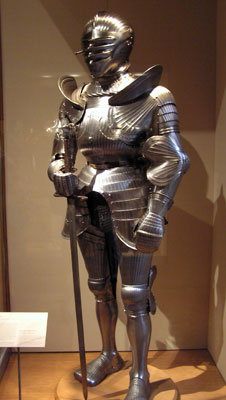 There were incredible little rosary beads no more than 2 or 3 inches tall, that opened up to show miniscule carved tableaux of scenes like the Crucifixion complete with spears the size of splinters. The perspective room, an entire room of intricate trompe l’oeil wood inlay, was incredible. I’m starting to feel overwhelmed again just trying to remember everything we saw.

We also saw the special exhibition of Van Gogh drawings , which was interesting, but a bit overshadowed by works like “The Oxbow,” “The Death of Socrates,” and “The Princesse de Broglie,” especially for the first time seeing these in person.

I was, however, disappointed that Madame X was down for conservation, several other rooms of European painting were down for reinstallation (including work by Durer), and I just realized that we somehow skipped the entire Roman art collection, which is very suspicious. (Jeremy likes Greek art better than Roman, so this must have all been his evil master plan; but I am bummed that I didn’t get to see the Roman portrait sculpture and the frescoed bedroom from the Villa of P. Fannius Synistor at Boscoreale, which I have studied in art history classes.)

Whew, time for a break, I think. More museum goodness in posts to come.