Julie tells me I have been derelict in my duty to post pictures. Sorry about that…

Here is a figure drawing that I did in preparation for an egg-tempera painting. This was a full-day pose on the first day of classes. 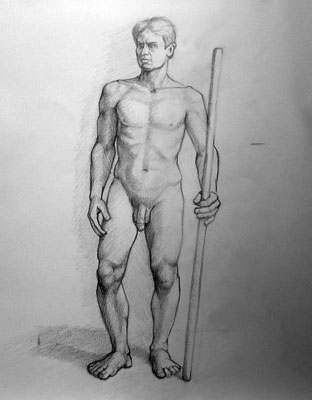 If 15 credits was not enough, I have opted to tack on a continuing ed painting class. It’s taught by Alyssa Monks, an NYAA alum. As she has gone through the academy, it is a good way to get an alternate take on what is taught by the painting faculty at the academy. I understand that her class has become the most popular continuing education class at NYAA and fills every time it is offered.

Here we’ve done a wipe-out. Basically just a mix of Red Oxide and Blue Black to make a neutral brown. The lights are wiped out with a clean rag and darks are added with additional mixed paint. The idea is to get an image that seems to be emerging from the ‘soup.’ You want to avoid sharp lines: everything should be smooth, sharp transitions will show through to subsequent layers. 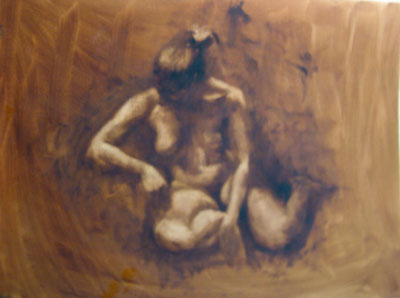 The next layer will be done using the same two colors (red oxide and blue black) mixed with white. This actually give a very wide range of colors and in particular temperatures. One school of thought is that the best way to effectively turn the form is to vary the temperature across the form. Monks asked us to paint a white scene which would force us to see the warm/cool transitions. A white bowl of eggs was suggested, but as there are so many fine white casts at NYAA I thought I’d work on one of those. Here’s the start. 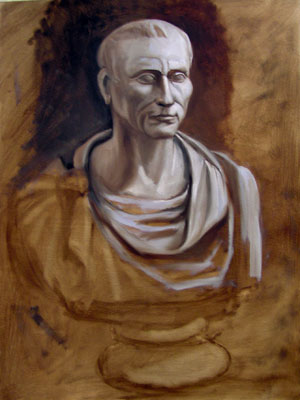 The most coveted in-curriculum class at NYAA is definitely Steven Assael’s painting III class. He is an extremely talented artist who can draw and paint better than about anyone out there. Now that I’ve had a couple of classes with him, I can see why it is that they don’t let him teach first year students. In some ways he is the antithesis of the what the other faculty teach. His technique is very much about painting in a direct method; which works for him as he has enough talent to be able to put down a single stroke that has the right tone, hue and form all in one fluid motion. Actuallly at times he actually throws paint off the end of the brush onto the support. Watching him work is amazing… trying to step into his shoes in depressing.

Three hours for this pose… working with a very chromatic palette. It’s going to be an interesting semester. 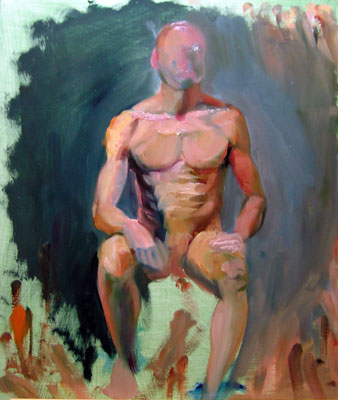 Mid-Semester and Other Critiques

Welcome to New York… and here’s the walking tour