Thank you to everyone who wished me luck and for your prayers. I have (finally) found a home for the school year. I will be staying at the International House. Built by John D. Rockefeller Jr. and the Cleveland H. Dodge family in the mid-1920’s, it was designed to foster interaction between foreign and american graduate students studying in New York City, a mission it maintains to this day. There is a screening process and applicants are selected for rooms that are heavily subsidized. In addition, they are renovating the main dormatory building, so there are fewer rooms available this year than in general; so I feel very fortunate to have been selected to stay here.

Of course, even a heavily subsidized room in New York is not going to be extensive. The room is somewhere in the neighborhood of 8′ x 13′. There is also a small sink and a small closet just to the left and right respectively which are not visible in the picture. But that is it, the length and breadth of my personal space—though I must say, it feels like such a luxury to have my own room this year. 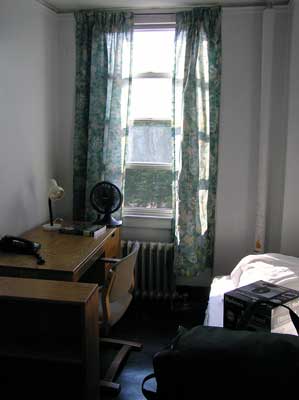 The International House is near Columbia University in the Upper West Side, an area sometimes referred to as Morningside Heights. The building itself is just a block away from the Hudson River and Grant’s Tomb. Here is the view from my window. I am told the Hudson will be visible once the trees lose their foliage in the fall. 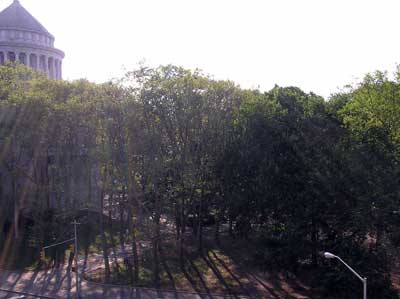 Guess I’ll finally have an opportunity to learn the answer to the riddle, who is buried in Grant’s Tomb. Here’s an image of the front of the monument. I am sure you won’t be able to read in the picture, but upon the building between the two reclining figures is written Give Us Peace. 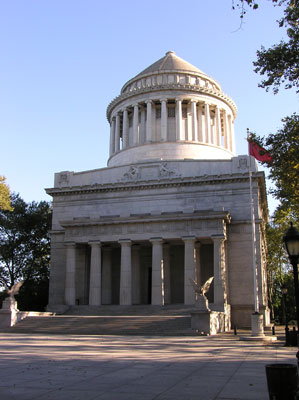 John D. Rockefeller apparently decided that a church was needed next door to the International House. Here is the view from the park just in front of the I.House. 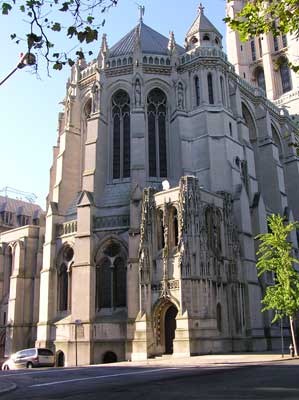 And here is an opposite angle. Don’t know if you can quite make it out, but there is a life-sized trumpeting angel on top of the church in both pictures, which should help to orient you. 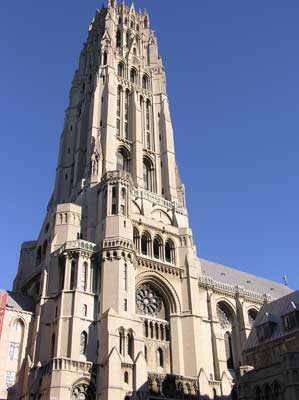 This area is a bit more ‘hip’ than Brooklyn Heights. There are many students, from Columbia and other schools, living in this neighborhood. Though I am in Manhattan proper, it will be a longer commute to get to my school in Tribeca, but all in all, I feel than I’m better off than I was last year—especially with Tara and Loren living just a couple of blocks away. I’m sure I’ll be seeing more of them this year.