I’ve had a request to post images of some of my older sweaters, since I didn’t get much knitting done over the summer (I knit about half a Broadripple Sock in sage green, and spent the rest of the time hanging out with Jeremy). So last night I took a few pics; bear in mind that most of these have been in storage for the summer, so they are a bit wrinkled and should probably be reblocked. As far as I can recall, they are in chronological order, spanning back about 2 years. 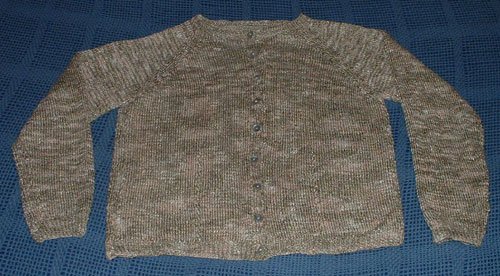 This is the Kimberly sweater found free on Berroco’s website, adjusted to work in some cotton/linen/rayon yarn I found on Ebay. It’s a cute cardigan that was a little scratchy because of the linen content at first, but is now quite comfortable and part of my work wardrobe in the spring and summer for combatting air conditioning. 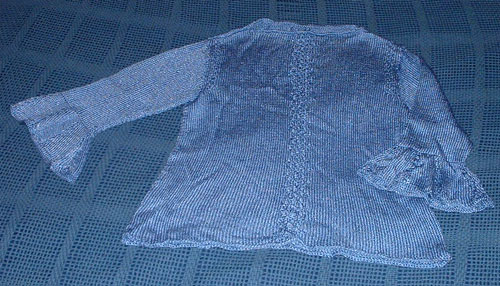 Here is a pullover I nicknamed the Bonnie Blue Bellsleeve, knit from the Spring/Summer 2003 issue of FCEK. The yarn is an acrylic/rayon blend, and I very trepidaciously blocked it with an iron despite the ball band warnings, to give it the shine and drape I was looking for, particularly in the sleeves. It worked great! The only other problem I had with the pattern was that as written there was not quite enough space for my head to fit through the neckhole, which was virtually just a slit left unsewn between the shoulders. So I had to make some adjustments for that. 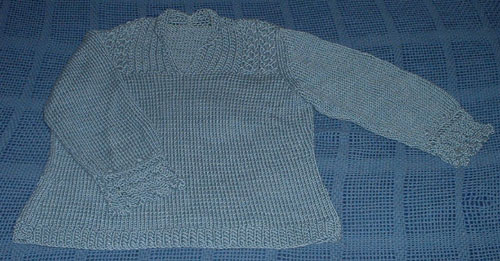 This is the Remembering Honey pullover from IK Spring 2003. I like the pattern, and it came out well, but it was a case of the wrong yarn for the job. It came out rather stiff, so I don’t wear it much. I would definitely reknit this pattern if I had more appropriate yarn, because it is a very cute sweater. 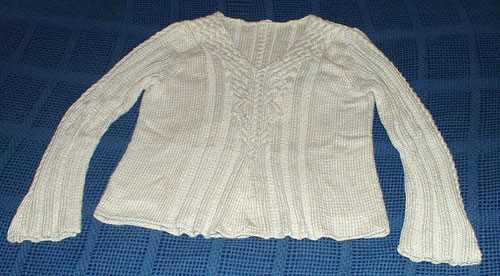 This is the Ornamental Cable pullover from Adrienne Vittadini Spring 2002, which I received as a kit from my parents for a birthday present. It is a really elegant sweater, and I couldn’t be happier with the way it turned out. The color is actually a pale minty green. 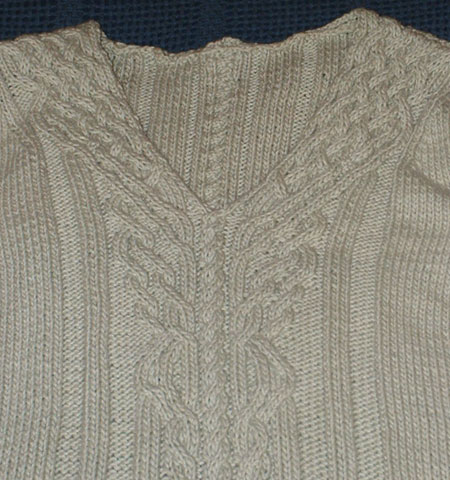 A rather complicated cable panel in the front, but I color-coded the chart to keep track of things more easily. 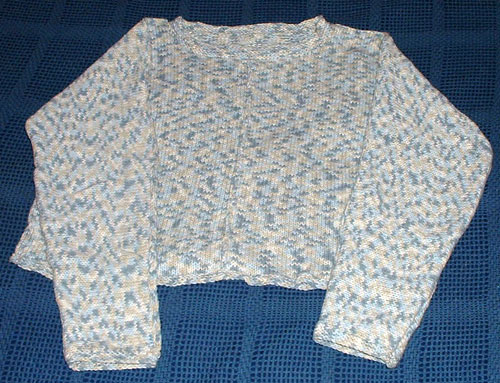 Here is the Dolman Updated from IK Winter 2003/04. The yarn I used makes it rather hard to photograph, but it is a very cuddly cotton/acrylic blend. The gauge for this yarn was different than what the pattern called for, so I made some adjustments, and the sleeves are a bit long as a result. But it doesn’t bother me enough to reknit the whole thing, and it is still a very wearable, loungy sort of sweater. 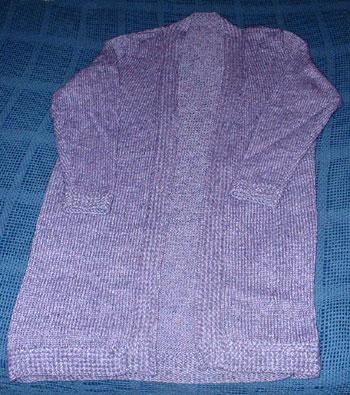 This cardigan was from the Fall 2002 Vogue Knitting, and was an unfinished project for quite a while because I didn’t have the right needles for the edging job. As you can see, there is a whole lot of border along the front that had to be picked up all at once, for which I needed multiple long circular needles. It came out well, and I like wearing it to work in cooler weather. The yarn is a funny nylon ribbon casing filled with wool boucle, so it is very squishy and warm while looking more like a smooth tape yarn (and not itchy!).

By this point we had started the blog, so things like my Juliet pullover and the Culdesac vest already have images online. 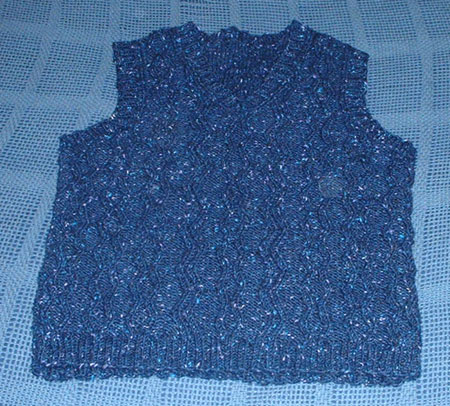 Finally, I’ll conclude with my most recent sweater project, a cabled wool vest for my dad, finished this summer, which will soon be winging its way to him in time for the fall weather. 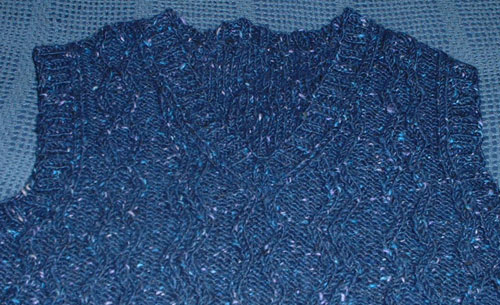 This is the Skye Tweed Vest from IK 2005, worked in Donegal Tweed that my dad picked out himself. It’s a lovely dark flecked blue, but rather hard to photograph well. Hope you like it, Dad!

Book Reviews: In Pursuit…, The Dark Half, and The White Devil

Something in the Air?