The first part of my summer vacation definitely was less productive than it could have been. Sure, I have procured gainful employment, but I have found it difficult to spend large chunks of time in front of the easel. Fortunately, I think that spell has passed, and for the last couple of weeks I have been working steadily but intermittantly on a multi-figure drawing.

It is probably the most complicated drawing that I have tackled. I learned a lot in the process and I can see that there is a benefit to working on a long-scale drawing that one doesn’t glean from ‘studies’ and sketches. I was planning to use this drawing as the foundation for a painting, and perhaps I still will—though I am sort of glad to be done with the drawing at this point. 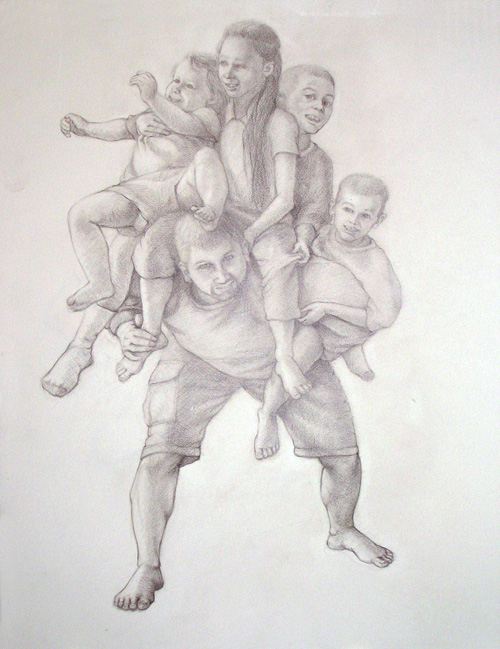 For those of you who might not know, this is a rendering of myself holding Gabby, Leah, Alek and Tayler. I guess you could call it Self Portrait as Uncle. This was from a photograph of the event which happened almost a year ago to the day, in Alaska. I wonder if the kids have grown sufficiently that I wouldn’t be able to hold them all at the same time now. 🙂

There are a couple of things that could have been better, but on the whole I think I’m rather pleased with it. Let me know what you think….