Recently, I noticed that one of the hot-water pipes in our basement had started to drip. Nothing too serious, but as they say, ‘a stitch in time…’ Here’s a picture of the culprit…

After a conference with my mate, Paul (and—virtually—with his father), it was determined that the correct course of action would be to replace the now-defective plumbing. That requires plumbing tools. Fortunately, Paul’s dad has a complete set of tools and was gracious enough to let me borrow them. So, with tools in hand, Paul and I set out to figure out if plumbers really earned their fees, or if waterworks were simple enough that two college grads could successfully repair a minor problem on their own.

Interestingly, we found that as these parts rust, they tend to become very difficult to un-screw. After using the two largest plumbers’ wrenches—Paul plying forcefully in one direction and I in the other—we found that we still lacked sufficient force to unscrew the coupler. Fortunately, Paul was a physics major and figured out a way to extend the arm of one of the wrenches to gain additional mechanical advantage. Finally we broke the seal, and the coupler gave way, allowing us to separate the two sections of pipe.

Another interesting thing about plumbing: even once the mains have been shut off and it seems that all of the water has run through the faucet, there is a significant, but finite, amount of water remaining in the pipes. Once we allowed the pipes to drain, we were able to remove the rest of the hardware.

Next was a trip to the local hardware store to pick up replacement hardware. That was a simple enough process once we determined that we wanted the galvanized steel and not the ‘black’ steel pipes and acquired some plumbing paste (now with Teflon). We returned, slathered up the threads of the pipe with water-proof goop, and screwed everything into place. Everything fit and looked great.

Now to turn the water back on… hey, look—now it’s leaking worse than before. So, another interesting thing about plumbing: you need to tighten everything past the point that seems to be more than sufficient. Good rule of thumbjust tighten until the wrench feels like it is twice as heavy as when you started the project.

However, perhaps miraculously, after much tightening, water was running smoothly through the new hardware without spilling a drop. Here’s a picture of the shiny new pipes. 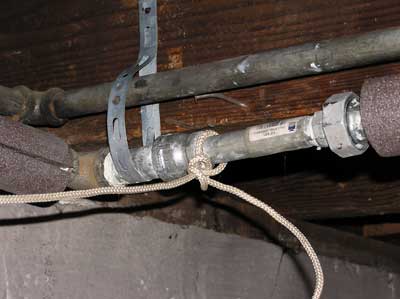 One last interesting bit about plumbing: having seen the inside of your plumbing will cause you to want to install filters on every faucet in your home.

A deep heart-felt thanks to Paul and Peter DeStefano.