Sunday was spent with Tara and Loren at the local, er, excuse me, The American Museum of Natural History, a truly monumental five-floor building with ties to Teddy Rosevelt. We spent over five hours at the museum, but much like at the Met, that is only enough time to see a minority of what is housed there. We timed the event to catch the tail-end of a butterfly exhibition and the start of a new dinosaur exhibit.

This was the last weekend of a butterfly conservatory exhibit. Like an aviary, it was the sort with two sets of double doors leading into a walkthrough room filled with tropical plants, 80-degree weather and dozens of (mostly tropical) butterflies and moths.

Would I were a closet lepidopterist—I’d be able to tell you a great deal about these particular lepidopteras, but alas, even the handout I got from the museum fails me. Apologies for the lack of info; if anyone out there has a name, please add it to the comments. 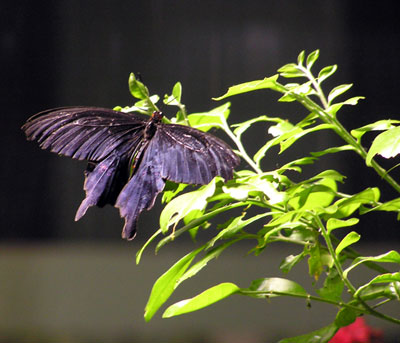 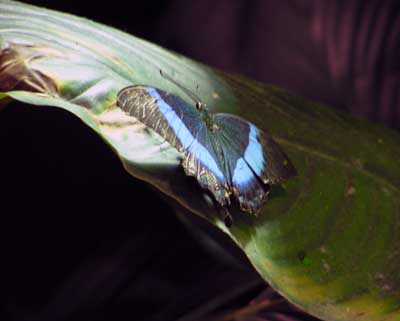 This one is also not listed in the handout, but I overheard the staff talking about them. Apparently these are the largest moths known to man—well, not these particular individuals, but the species. The heroic Atlas Moth. 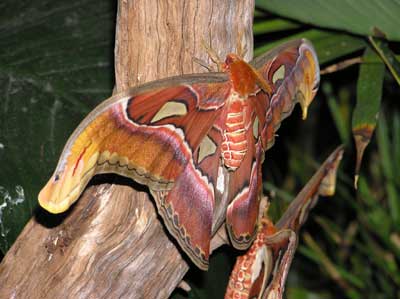 The American Museum of Natural History has an extensive set of dioramas, displaying animals from all over the globe. We only made it to a portion of the African exhibit, but even that was a giant room with 20-some displays. I thought it was impressive to see four heavy-cavalry knights in the middle of the Met, but that is nothing to seeing a dozen life-sized elephants taking up the center of the room (told you it was a big room). 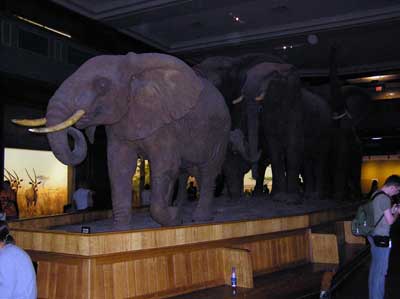 All of the classic safari wildlife was represented in force; frequently they had whole familial groups of each species. Here are a couple of shots of the lions. You’ll perhaps notice, as I did, that the taxidermy seems quite exceptional. Well, the reason is that it isn’t exactly taxidermy. I learned that they created scale clay models using field measurements which were then cast. After that, the animals were skinned and the skins streched over the models. Please bear in mind that all of this was done well before the days of PETA. They did look fabulous. 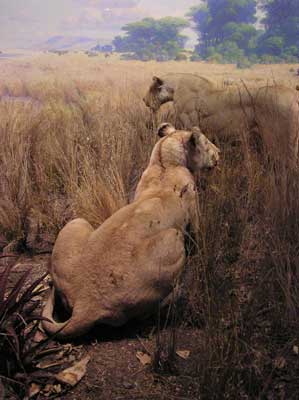 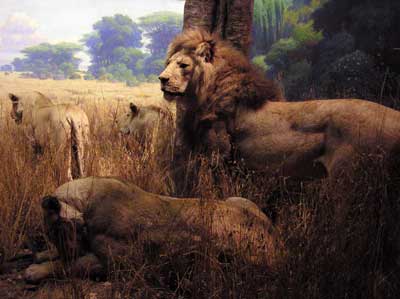 Jumping back a bit, here is a shot from the main entrance hall of the museum. You can’t quite see it in this picture, but just in front of the “small” carnivore is a rearing brontosaurus. It is enough to make any armchair paleontologist salivate in expectation of what the main dinosaur exhibits will hold. 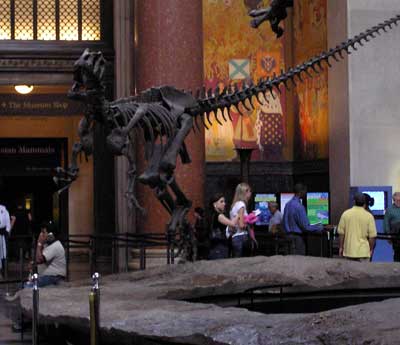 Before we get to that, it is worth noting that there is an extensive collection of advanced and primitive mammals as well as dinosaurs. Woolly Mammoths, Saber-Toothed Tiger and formidable Cave Bear were all present among many, many other, lesser known, but equally impressive skeletons. Here is a shot of the cave bear. 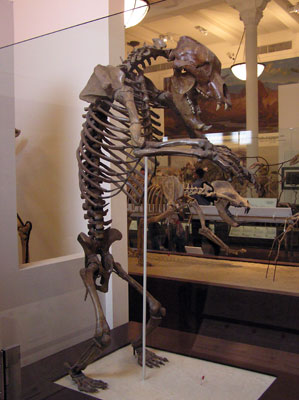 On to the dinosaurs. I guess I’m a sucker for the classics. These guys need no introductions. 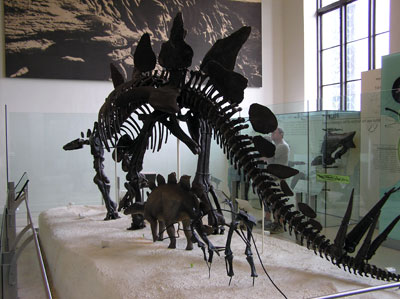 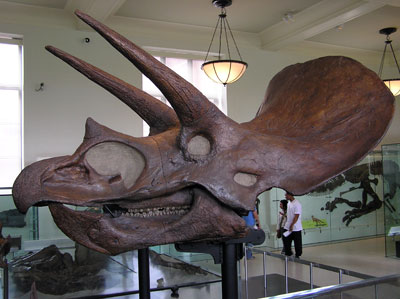 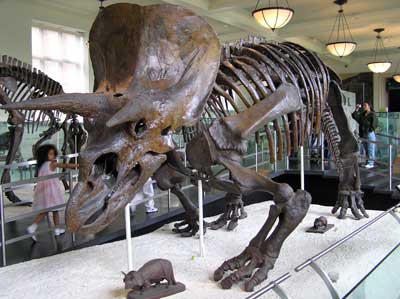 And of course the infamous T-Rex. This is a shot of the one they had in the permanent exhibit. The Tyranosaur was also one of the stars of the special exhibit. Computers have reached the point where they can accurately model the bio-mechanics of locomotion. This is being used to understand the skeleton and myology of all animals, including extinct ones. I remember well the toy dinosaurs of my youth. T-Rex was always depicted standing erect with his tail dragging behind. New research is suggesting that this was a skeletal impossibility. They are now depicted moving very much horizontally with the tail extended out to counter-balance the weight of the head. There was a fasinating animatronic skeleton at the musuem that walked in a very convincing fashion. There are excellent videos of this on the Apple website (links are part way down on the right-hand side) of the T-Rex walking. 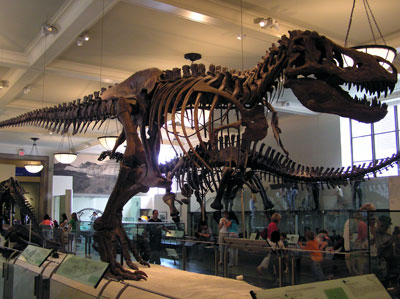 The other thrust of the exhibit was to lend further weight to the current meme that dinosaurs are still extant…. they are just what we call birds. There was a fossilized nest complete with brooding dinosaur, which was presented as evidence that dinosaurs and birds share at least some form of biological behavior. There were many winged dinosaurs presented not only in skeletal form, but also as a fully-realized artist conceptual model. Like this little Sinornithosaurus. 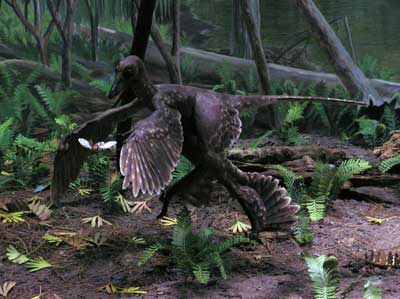 One might be tempted to ask, “How do we know that dinosaurs had feathers?—no one has ever seen a dinosaur feather.” Which is true… however, take a look at this. 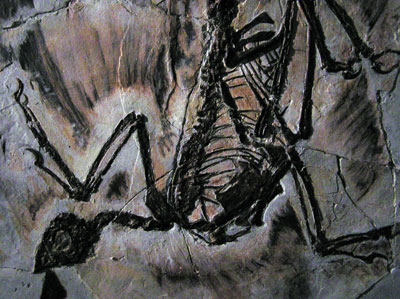 If you look closely, you can just see the unmistakable impression left by the feathers of this dinosaur. Extremely cool.

The museum also had a world-class planetarium—actually, they claimed to have the most powerful and accurate 3-dimensional star generation machine in the world. Apparently money is no object in the self-proclaimed Capitol of the World. They also have a full IMAX theater somewhere within their five floors of exhibits, though we never stumbled upon it. Definitely worth going back sometime.

‘Finished’ is a Relative Term…