I have been reluctant to post pictures recently because there were some photos of Loki still on our digital camera that I couldn’t bear to look at yet. This weekend I finally got it over with, and took some photos of a few current and finished knitting projects.

…more sock news. I posted separately about the Mother’s Day socks a few days ago, so I won’t show those again here. But I did finish my modified Diagonal Rib socks as well. 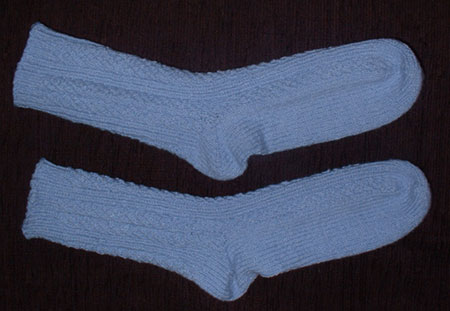 It was an easy pattern to remember, once I had worked it out for my necessary stitch count, and added a lot of visual interest to these socks.

Expect to see more socks in the future. I have a friend temporarily living in my home theater room, and his cat is way too interested in larger knitting projects, so I have been restricted to socks for TV knitting. For my next trick, I am thinking of making a pair of Broadripple socks for myself, perhaps adapted to toe-up.

I’ve continued to work on my Dad’s cabled vest, though I had a bit of a set-back, wondering why the ribbing on the front piece kept measuring out larger than the back, even with the same number of rows. Eventually I realized that the ribbing was supposed to be knit with smaller needles than the body (duh), so I have restarted the front.

At any rate, here is a close-up image of the stitch pattern. The dark blue yarn makes a decent photo difficult to come by, but I think this one is pretty close. 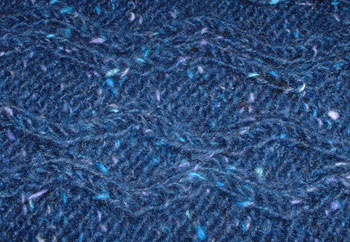 I don’t think I have mentioned this project before, but back in April I started making the Polka Purl Dots vest, from the Spring 2004 edition of Interweave Knits, using some very light silvery Dale Kolibri. I’m quite pleased with the way the top is coming out so far… hopefully it will be worth the trouble of working with this very splitty (but otherwise lovely) yarn. 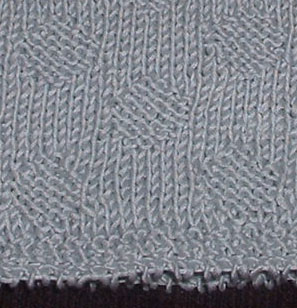 The pattern is a rather complex one, knit all in one piece to the armholes. It requires you to keep track of the textural pattern while working decreases at each end and simultaneous waist shaping at each of the two false seams. Since the picture below was taken, I’ve started the armhole and neck shaping for the back piece, and hopefully kept sufficient notes on where I left off in the front shaping to pick that back up afterwards. So, not a pattern for the faint of heart, but it has been an enjoyable challenge so far. 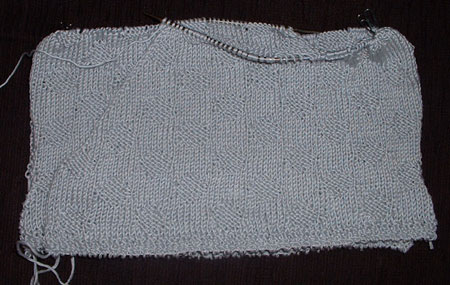 And now for a seamless segue…

Since the yarn-attacking kitty has kept me and my knitting away from the TV except for an hour or two in the evenings, I have been catching up on my reading while I knit. This weekend I finished Good Omens, an apocalyptic British comedy by Neil Gaiman and Terry Pratchett. It was so full of jokes and puns that I’m actually not sure I caught them all. In a nutshell, I’d have to say it was a bit like the movie Dogma—if Dogma had been more funny, less crude, and British, anyway.

I also read Across the Nightingale Floor, the first book in a trilogy called Tales of the Otori, by Lian Hearn. It is set in an imagined world akin to feudal Japan (think Crouching Tiger Hidden Dragon on an epic scale) and tells the story of a young man, Takeo, whose entire village is wiped out by the powerful warlord Iida for their religious beliefs. Takeo is rescued and taken in by Shegiru, a nobleman of the neighboring Otori clan, who has his own vendetta to settle with Iida. The book weaves revenge and political intrigue together with Takeo’s struggle to reconcile the disparate parts of his nature: his religious upbringing, Otori adoption, and blood ties to a secretive Ninja-like guild called the Tribe. A very interesting book and a quick read; I am looking forward to reading the rest of the trilogy.