I know I haven’t posted much of my work lately. I do apologize. A lot of what I am doing in class right now is either photographically uninteresting (e.g. perspectival prep-work) or multi-week work that I’ve already posted. But here are a couple of new things.

Friday was another watershed day in Frank Porcu’s anatomical drawing class. We’ve been working on developing these mass-conceptions for a lot of the underlying structure of the human form. On Friday, Frank had us drawing from the model all day. Everyone started drawing the mass conceptions, but Frank admonished us to get rid of the crutch and that we needed to use the mass conceptions to aid the visual phenomenon. Or, as he has said on several memorable occasions, “Drawing is half of what you see and half of what you know.”

So after some demonstration, we started again, using the mass conceptions as a very initial scaffolding of foundation upon which all of the visual phenomenon could be accurately mounted. Here’s an example from the class (each one of the drawings was a 20 minute pose): 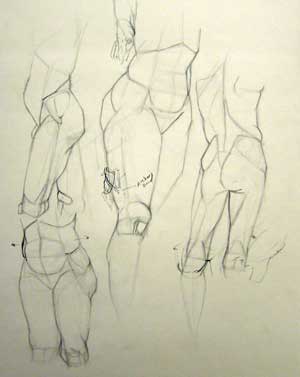 I was amazed at how much I was able to capture in twenty minutes. Normally I can get a pretty fair contour drawing in that amount of time. Now I am getting a pretty accurate contour as well as a planar break-down of the interior forms. I know the drawings look very architectonic, but that is easy to hide with rendering.

In the figure drawing class, we’ve been given the assignment of copying a drawing by Prud’hon. No small feat. I’ve spend several days working on this one, and it’s starting to get close. Hope that I get a chance to finish—it’s due later this week. 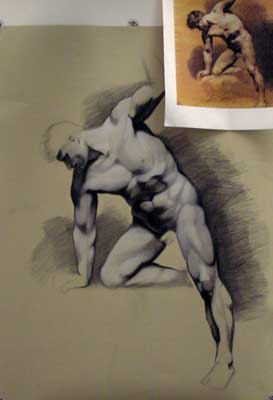 Ted Schmidt also took our Figure Drawing class to the Met’s Drawing Resource room this past week. There we were able to see master drawings by Leonardo, Ingres, Degas and Prud’hon, among others. The drawings aren’t out on exhibition in the museum, so it was nice to have the opportunity to see them.

I did take another picture of my painting, but, alas, the images didn’t turn out. Hopefully I’ll be able to find some better light and do a re-shoot this coming week.

Just Dirt and Oil on Canvas