Okay, so the basic ‘Jeremy-in-armor’ painting idea got a little trashed. Wade Schuman basically said, “Armor exists for one reason — to stop someone from stabbing you with something sharp. What are you afraid of?” I didn’t really know what to say to that, but I did some thinking about my fears and there was one that kept coming up—mediocrity. So, with the fear of mediocrity foremost in my mind, I set out to construct an Allegory of the Difficulty of Painting painting.

Here’s a first stab at the composition: 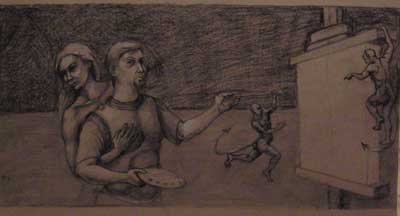 Basically, I see the little imp-like creatures as being Ignorance and Incompetence. They are trying very hard to help, but like Heckle and Jeckle, you know they’re just going to mess things up. The female figure I see as Sloth, embodied as a temptation. I know this reading really doesn’t come through in my composition, and—honestly—I am absolutely not trying to equate women with sloth. To me at least, it seems temptation necessarily must come in a pleasing form. I was trying to get across the idea that it would be so much easier to just go and sit on the couch and watch a movie with some comely company, rather than toil with pigmented blobs of oil standing before a blank and accusatory canvas. The female figure really isn’t distracting enough in this composition and I need to rework it. But that’s the basic idea.

I did a couple of studies of Heckle and Jeckle as well: 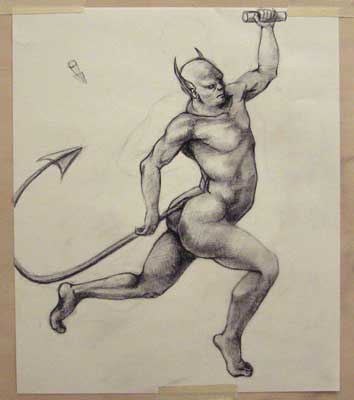 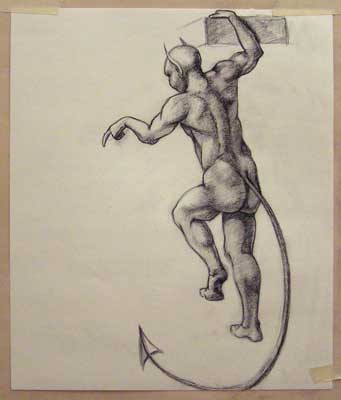 Today I’m going to try to work on setting up a perspective grid and actually creating a setting for the background rather than just two stripes of tone. If time permits, I’m going to rework the relationship between the two main figures as well.

Wade wants these paintings to be life-sized. I’ve never painted anything that large, and certainly not this complex. Even if I don’t quite go life-sized, the canvas will probably be in excess of 30″ by 60″. Hope that I haven’t bitten off more than I can chew. Oh, I forgot to mention, since this was all a justification for the armor in the first place—it’s a Greek breast-plate. All of the great ideas in Western science and art can trace their roots to the ancient Greeks. So the armor represents Classical Training and how it is the only defense against mediocrity.

New Drawing of an Old Friend