Well, the first week, albeit a short week, has passed. I’ve posted a couple of drawings from the week. There isn’t much to show yet, and I apologise for the quality of these pictures. I’ve started using Pablo Caran d’Ache pencils. They’re very nice, and I like them a lot. Though not very erasable, they seem to suit my style. 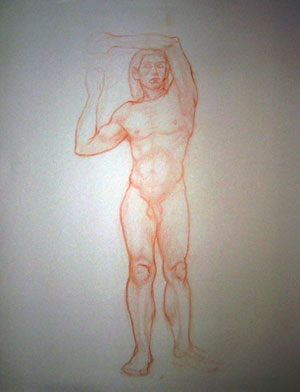 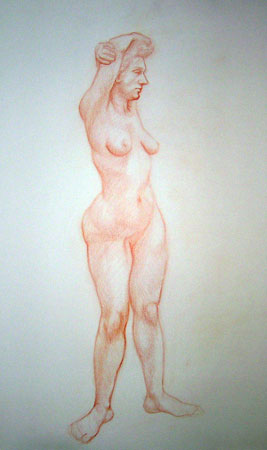 Looks like we’ll be doing longer poses this semester, which I very much like. The first was an hour long, the second was a two hour pose.

Today I had Anatomical Drawing with Frank Porcu. Perhaps you’ll recall me talking about his Structural Drawing class last semester. Frank taught me more than any other single professor last semester and his was the one class that I absolutely had to be in this semester.

Structural Drawing was intense, but Frank’s speciality is anatomy. It took him but a moment to get oriented, tack up a six foot by thirteen foot piece of paper to the wall, grab a handful of charcoal, chalk, pastels and bamboo skewers (which he likes to use both as a measuring stick and, when broken, to show plane changes) and go to town.

During the course of the six hour lecture, he covered the paper with notes and drawings about proportion and artistic conventions (most rendered in perspective). When he ran out of room, he took to wiping out the charcoal with his sleeve, or simply drawing on the wall. Nothing seemed safe from his charcoal—even our intrepid model was drawn upon for the purposes of elucidation. The floor, forced to accept the attrition of half-broken pigment sticks, acted as a mortar as Frank buzzed back and forth, rendering on any available surface. At one point, Frank, in need of another hand, opted to stick his bamboo skewer through the side of his sweater-vest, leaving the weapon dangling by his side like a sheathed sword. By the end of the day, it looked as though a creature with multi-colored blood had been poorly sacrificed upon the broken skewers.

I was exhausted simply taking notes, but it seems that I won’t be disappointed in that class. I can only hope that Frank will feel the same way about me at the end of the semester. Such is the renown of Frank’s Anatomical Drawing class that several second year students and one of the third year fellows are auditing it.

If you ever find yourself in New York City, Frank Porcu teaches a year-long Ecorche class at the Art Students League. If you have an interest in anatomy, it would be well worth your time.

New Painting and a Reset