The Year of the Rooster is rapidly approaching, and I have spent this past week working on a linocut for the annual Baren Forum New Year’s Card Exchange. This will be my first year participating, and I am already having fun getting little printed treasures in the mail every so often.

I chose to base my image on a rooster silhouette of my grandmother’s. She is a very talented artist herself, and a year or two ago gave me some plastic templates she created for blind embossing. One was a rooster’s profile, and I knew right away I wanted to use it for my print. Unfortunately, it is too large for the card exchange, so I shrunk the image on a copier and used that silhouette as the basis for my plates. 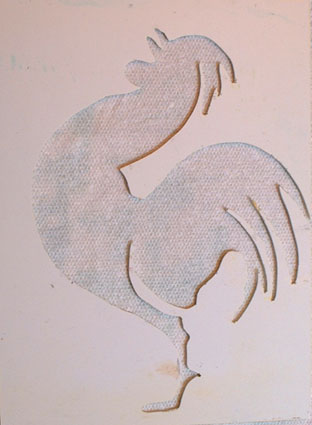 I’m always interested in experimenting, so I originally thought I would do a ghost-carbon thing, but it didn’t give the effect I wanted with my plates, so I adjusted the plan. (I still plan to give the ghost-carbon thing another shot for Print Australia’s SSNW—Southern Summer Norther Winter—Mini-Print Exchange, so I’ll describe the process then if it works out.) One plate was the basic silhouette of the rooster, the other a detail plate of feathers and texture. I ended up printing the detail plate in green first, which looks kind of neat and abstracted. Now I am blind embossing the silhouette over that for a subtle textural outline that you only see from certain angles. 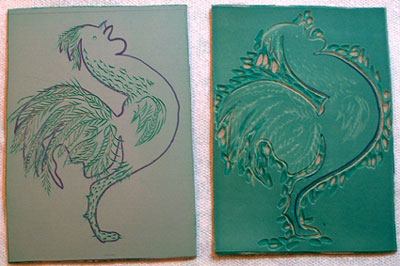 The prints are still damp enough to transfer a bit of pigment to the blind emboss plate, and when I cleaned it by printing off onto scrap paper last night, I really liked the effect. So I’m doing some incidental ghost prints as a separate edition during the blind emboss. Actually, it might be fun to try a little series of animal silhouettes using this technique. 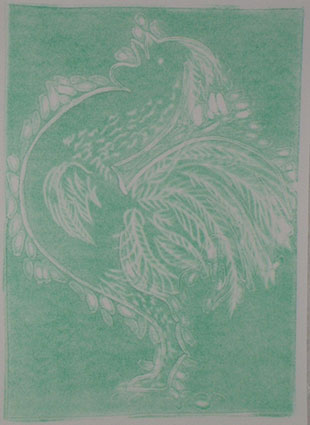 It was a bit beyond the camera’s ability to capture the embossing, so you’ll just have to take my word for that one. At any rate, here is the completed print. 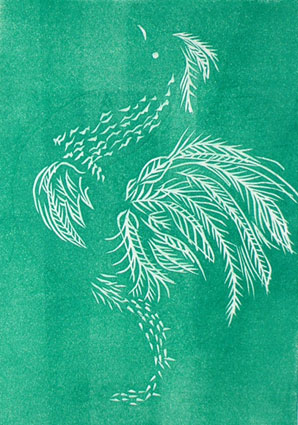