It’s hard to believe that the final week of classes is upon me. I’m pretty much caught up with my work. There is still some painting that I need to finish, but I’ve pretty well finished the rest of my projects. Here’s a peek at some of things I’ve been working on in the last week.

First up is a drawing for my Composition and Design class. It’s a synthetic composition (basically that just means that the elements were drawn from disparate sources) of three figures. The inspiration for the work comes from the Iliad. There is a scene at the beginning of the work that I’ve always liked. Agamemnon decides to take the slave-girl of Achilles for himself. Achilles becomes angry at this and is about to kill Agamemnon, when Athena appears behind Achilles, pulls him back by the hair and convinces him not to kill Agamemnon. There are many different ways of interpreting this scene, from an allegory of law to the virtues of men and the virtues of women. But my favorite is seeing the three as the id, ego and superego.

At any rate, I wanted to try my hand at composing figures from the imagination. I know that John Jacobsmeyer is going to complain about my anatomy, but I still feel that I learned a great deal from the process. The figures of Achilles and Athena were done from imagination. The Agamemnon figure was done from a model. 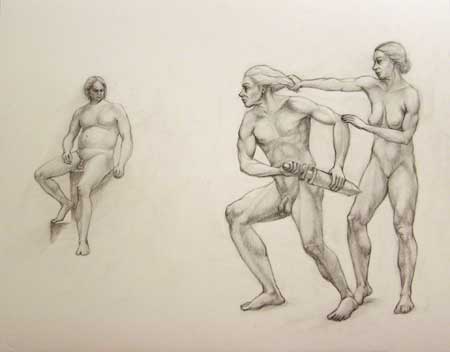 This past Friday, I spent pretty much the entire day working on a cast drawing for my Structural Drawing class. Frank Porcu taught me how to render… I’ve learned so much in his class. Can’t wait for his Anatomical Drawing class next semester. The drawing is in vine charcoal. It could use some more work, but there isn’t really time to finish it properly. The leg in the lower right corner was drawn by Frank (in about 10 minutes, I might add). 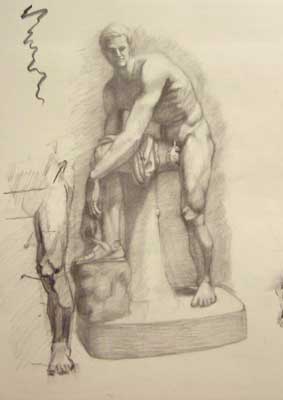 As I mentioned, there is still quite a bit of painting left to finish. We were assigned a self-portrait. I’m using the Venetian method. Here I’ve painted in the dead-layer, added the green velatura and the yellow glaze. I need to go back in and paint in some highlights and add some body to the light masses and of course paint in the hair. (Yes, I do have a beard at the present, and yes, Julie has made me promise to shave it before I get back to Salem. 🙂 ) 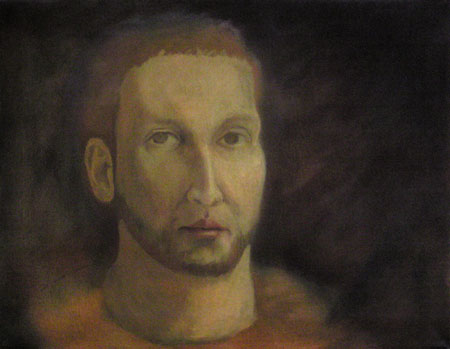 I should have more time after next weekend to post more about the philosophy and some of the technical aspects of what I’ve learned this past semester.