Sorry that I haven’t posted anything of a more philosophical nature lately. I’ve got some more gems from classes as well as from a clinic put on by Vincent Desidero. I’ll try to post that in the very near future.

For now I have a number of pictures.

I seem to have pictures from just about every class… so I might as well go in order. Monday is Figure Structure. We’ve spent a couple of weeks working on the armatures now. I’m finding that I’m obsessed with making the clay as perfectly smooth as I can. Fun stuff—I really wish that I had an opportunity to take a real sculpture class. 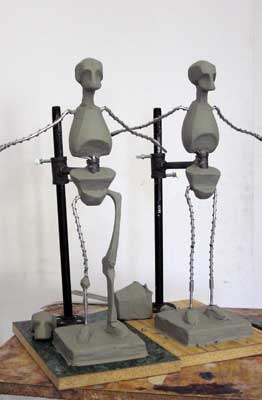 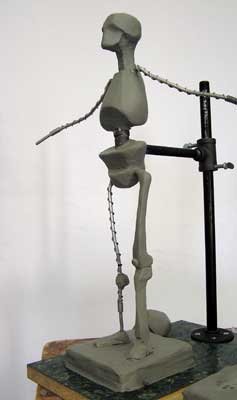 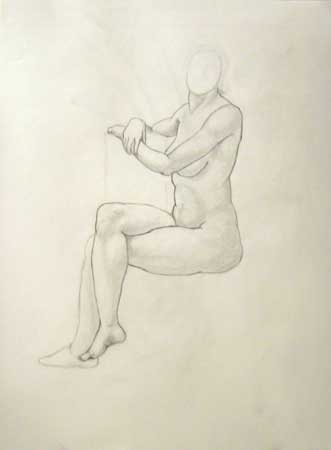 Thursday is Painting I. Martha is a firecracker. We’ve spent the last 5 class periods working on this painting. We started with a detailed drawing which was transferred to the canvas. The canvas was then toned and prepared for a wipe-out. From my point of view the figure was almost entirely in light, so there wasn’t a lot of tone left after this step. Then we painted the figure using a series of pinks and lavenders created entirely from Indian Red, Ivory Black and Lead White. The key thing was to lose chroma as the form turned away from the light. This part was painted directly into the wet wipe-out. Shadow areas would have been left alone. Once that was finished, we added a velatura (transparent glaze) of Terre Verte mixed with either Liquin or Galkyd (to make the paint thiner and speed the drying time). This was to be painted thinly, but with streaks of paint. I painted my green layer too thinly, though that seems to have been preferable to those who painted it too thickly. Once the green layer was dry we painted another velatura of Transparent Gold Ochre mixed with a bit of Cadmium Red Light over the whole figure. With this layer wet, we painted passages of mixed opaque flesh tone and added highlights using inverted compliments. I think most people understand complimentary colors (e.g. green is the compliment of red). Inverted compliments have to do with the relative value of the colors (e.g. purple is darker than yellow); therefore, an inverted compliment would be compliments that have an inverted value relationship (e.g. a light blue next to a dark orange). That was the process for the figure. The background and chair were painted opaquely. 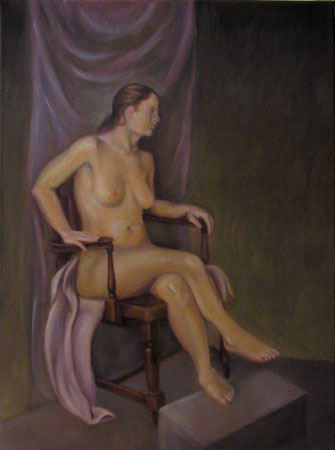 My figure turned out a little yellow… perhaps I didn’t add enough Cad Red to my yellow velatura. So there is definitely room for improvement. But on the whole I’m pretty happy with the process and feel that I’ve learned a great deal from this painting. We are supposed to do a self-portrait using a similar procedure before the end of the semester. I’ll let you all know how it goes.

Friday is Structural Drawing day. I know that I havn’t been posting many images from the work we’ve been doing in this class. If you’ve been reading regularly you know that I feel this class is the key to the whole curriculum at NYAA, so perhaps you are having difficulty reconciling those two statements. It’s not that I’m trying to keep the information to myself, just that the homework for this class tends to not be terribly photographic. We have started working from the casts, though. I did a ink wash last week—too light to photograph, I’m afraid, but it was very educational. Frank Porcu is always saying that this is a “thinking man’s game.” He seems to be giving us the most difficult mediums with the intent to make us stop and think before striking the support. This past week we were to do a very carefully measured contour drawing of one of the casts in vine-charcoal (vine-charcoal, which we have been using all semester, is generally considered to be the most difficult drawing medium). We then continued to work on the cast in class. Here’s a picture of Bacchus and Silenus. 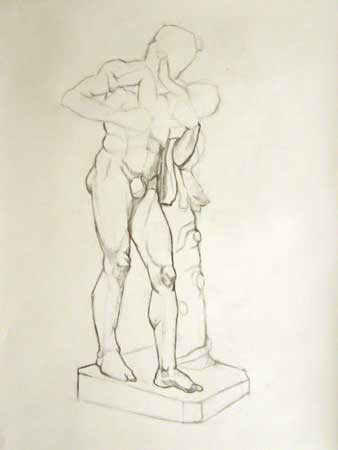 Believe it or not, it took about 4 hours to do all of the measuring and get an approximation of the contour. Three hours of class time was then spent refining the contour around the legs and starting to model the form. Here’s a detail. 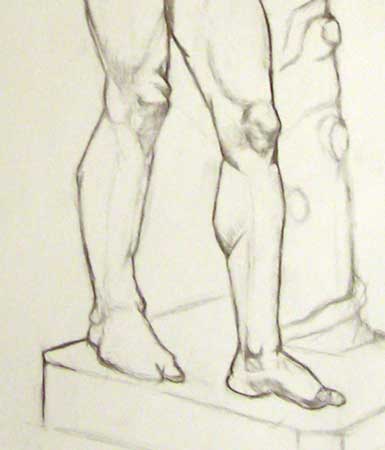 I wish that he would have asked us to continue these drawings, but he seems to feel that the rest is just busy work. Great quote: “Any idiot with a burnt stick in a dark room can copy the shadow shapes.” Of course, we were standing in a drakened room holding vine-charcoal at the time, so that explains why we’re moving on. He said that he wants another cast drawing done for next week. The next one should be “10 times better.” Now if I can just find a way to extend the length of the day to 240 hours! I started on it today though… I’m working on a cast of the Belvedere Torso. That cast was awfully intimidating when we first arrived at the school, but now I can’t wait to tackle it.

Well, that’s the past week for me. I’ll post more about the philosophical side of the school shortly.