Some of my professors had started to complain that my drawings weren’t specific enough. I had no idea what exactly that meant. However, I was able to finally pin Harvey Citron down, and he showed me what they meant. It was something of an epiphany for me.

To illustrate: here is a drawing that I did in the morning on Wednesday. It was three 20-minute sessions in the same pose, and I thought that I really nailed the drawing. 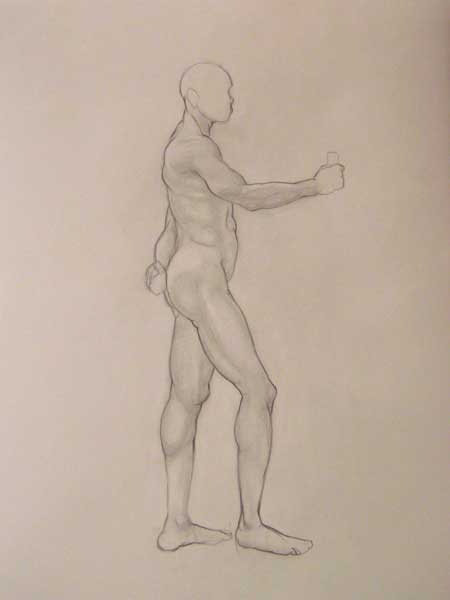 So, after Harvey trashed that picture (in a very constructive way) I found that, when he said that I wasn’t looking carefully enough at the curves on the body, what was happening was that I was fixating too much on the contour line. I was trying to make the contour line beautiful. In doing so, I was creating curves that were overly smooth and regular. I decided to try and really capture the mimetic quality of the curves on the next drawing. As I started the process, I felt like I was creating a very ugly drawing, full of awkward lumps and bumps. It reminded me very much of Potormo’s drawings, which I really don’t care for.

Then I started to add in the tones within the contour and something happened— it all started to gel. Very odd… Harvey came back around as I was working on the drawing and suggested that the tones and the contour work hand-in-hand (which was just starting to dawn on me) and that I shouldn’t be trying to get the contour completed first; they should be developed together iteratively. We were drawing from the cast during the second half of the class.

Anyhow, here is the drawing: 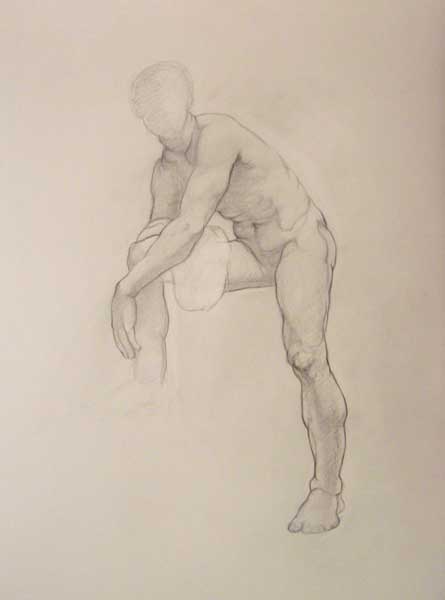 To me, it looks like the two drawings were done by different artists. I can’t believe how much better the second one is. I really wish that I had more time to work on this new way of drawing. Perhaps this weekend I’ll have a chance.