Yesterday there was a gallery tour through Chelsea. We visited about a dozen galleries there. The really amazing part, however, was that we only needed to move between three streets to visit 12 galleries, and that we skipped more than half of the galleries on those three streets! The area is literally saturated with galleries of contemporary art.

The most interesting art was at the Mary Boone Gallery, where they had an exhibit of paintings by Will Cotton. Will is an NYAA alumnus and his work deals in a very interesting way with what is known as the ‘Male Gaze’. The Male Gaze is a topic that we’ve been dealing with quite a bit in Catherine Howe’s Art and Culture class. Basically, it refers to the fact that in Western art, the artist and the viewer are necessarily considered to be male (and until recently, heterosexual). This is particularly important when dealing with the nude. Lately, feminist artists (after finding that simply substituting a male nude for a female one created a homo-erotic reading rather than the intented feminist interpretation) have been working to co-opt the Male Gaze (usually this involves some sort of a dead-pan ala Manet’s Olympia of 1863).

Nevertheless, Cotton’s paintings are interesting precisely because they straddle the fence between being feminist and misogynistic. In fact, I would say that Cotton has gone so far as to make the fence his position. He paints nudes in suggestive positions amid a world constructed out of candy, and it would seem hard to read the content as anything but misogynistic. However, when you look more closely at the works, the meaning becomes much less clear. For one, the sweets are more highly rendered than is the figure, which suggests that they are more important in the hierarchy of the composition. In fact, the candy is so lovingly and fully rendered, that one feels in danger of developing a cavity just by looking at the works. In the same vein, the figures seem to take on some of the qualities of the world that they inhabit. This suggests that Cotton is preaching against the vice of excesses. Interesting work—it is easily accessible in terms of subject, yet nearly impenetrable in terms of meaning. How very contemporary.

After waking around Chelsea and looking at contemporary art for several hours, I met up with Tara and Loren at the Met. In addition to seeing fabulous works of art from all over the world, we saw the titular head of the largest international NGO (see previous post, if you are unsure who I am referring to). The Met is always a good time. It was fun to be able to give my friends a bit of a tour. I really feel like I know my way around the place now.

Then, after walking around for and looking at art for nine hours, and realizing that I hadn’t eaten anything but a bagel that day, it was time for a real meal. We went over to Jackson Hole Burgers. There are half a dozen of these restaurants in the city. They have dozens of different burgers, as well as burritos and omelets. Here’s a picture of Tara—she hasn’t started eating yet because she’s trying to figure out how to do so. 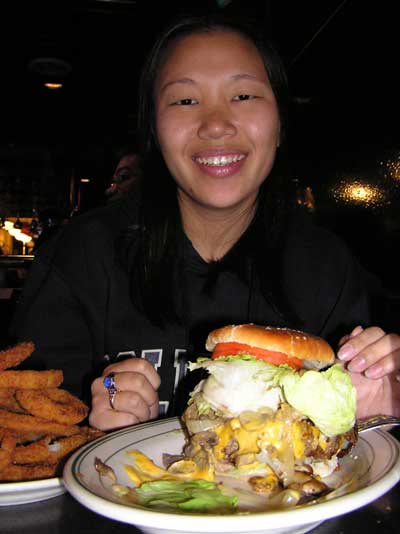 The food was excellent, and the atmosphere reminded me of a 50’s diner. However, it was more like someone who grew up in the 80’s trying to make a place that had a 50’s feel. Still, a giant and tasty burger with fries for around $10 is a pretty good deal in this part of the States.

Afterwards, there was nothing left but to watch the Red Sox manage to outlast the Cardinals and take a one game to none lead in the World Series. Who’d have thunk it?