With the cooler, rainy weather we had recently, my hands decided they needed to work on something warmer and softer, on needles greater than a size 2. So I gave Juliet the weekend off, and dusted off my Braid-Edge Cardigan, started back in the spring. This cardi is a long one, knit mostly in stockinette, but with neat borders that look almost woven. The pattern is from the Winter 2002 issue of Vogue Knitting, as I recall. I am making it with Katia Beetle from elann.com, a cushy nylon jersey ribbon filled with wool/acrylic boucle, in a lovely dusky lavender color. I also decided to make it a bit shorter than the pattern calls for; it looks like it will fall to about my knees when complete. 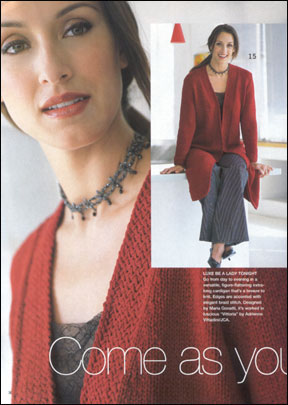 When I stopped working on it, I had finished both sleeves, the front about as far as the armholes, and had started both fronts. This past weekend, I finished all the pieces, and seamed the sweater. It looks like it will fit nicely, though it looks very strange right now without that wide braided border around the front and neck, kinda flopping off my shoulders. Next I will need to reseam one of the sides (sigh… it got a little asymmetrical by the bottom), and try to rustle up needles to work that loooong front border, which is made by picking up stitches around the edge and knitting out. I’m half tempted to try knitting the border as a separate vertical strip, and sew it on afterwards, since I will need a really long circ to hold that many stitches. I also have to figure out how to deal with weaving in ends, without having the nylon jersey ribbon part of the yarn unravel. I might try searing a scrap with a quick press of the iron, and see what I get. Otherwise, I think Fray-Check might be in order.

After seaming the Braid-Edge, the weather here has warmed up a bit, so I went back to work on Juliet. I’ve now reached the front neck/armhole shaping. I’m on my last full ball of yarn, plus leftovers, but I think I should have just enough to finish off the front and do the neckband, assuming I can figure out a way to knit it. If I can possibly avoid it, I would like to keep this sweater from needle-less limbo, which has been the fate of the Victoria Tank and possibly the Braid-Edge Cardi as well. For Juliet, though, I have been using a long Addi circ, which might work with the magic loop technique on the neckband. I’ve never actually tried this technique, though, so cross your fingers.