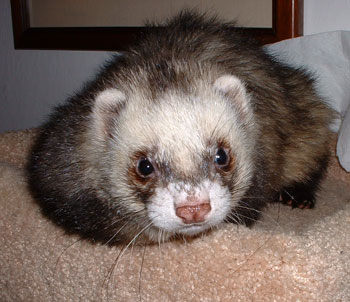 Ajax is the champion heavy-weight wrestling ferret in our busyness. Never mind that the other four donâ€™t even approach his weight class—Jax could take them all on together, with one paw tied behind his back. He is a little overwhelming to Loki, better with Rocky. Nikita has been his buddy ever since we brought him home, and she trails in his wake like a little toady, ready to jump on whomever he decides to scruff. Ajax is surprisingly gentle when he wrestles with Niki, though youâ€™d never know it to hear her chattering. 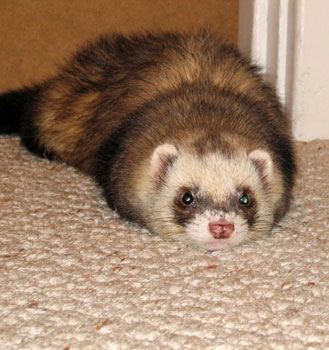 The one ferret that Ajax absolutely cannot get along with, no matter what we do to intercede, is Pandora. As the alpha ferret when Ajax was brought home, Panda showed her dominance to the new kit early on. Unfortunately for her, he grew—a lot—and quickly. Soon he discovered that he could fight back, and that was the beginning of the end. Now Pandora is terrified of Ajax. She immediately runs away from him if they are out at the same time, and he naturally gets excited and chases her. Then she screams and wriggles, which just excites him more. If we donâ€™t keep them apart, we end up with a mess on the floor, and gashes on Pandaâ€™s neck. More recent attempts to get them used to each other have resulted in Pandora gaining just enough confidence to clamp onto some part of Ajaxâ€™s face and not let go, which could injure them both. As a result, they have separate housing and separate playtimes, and we have virtually conceded that they are arch-nemeses. 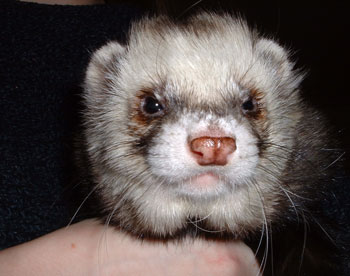