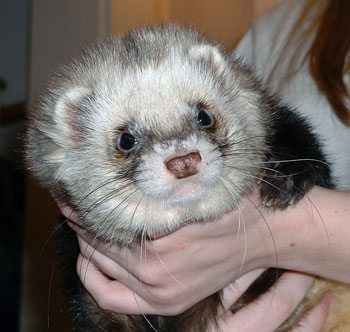 Ajax (a.k.a. Aiantes, A.J., Maximus, Jaxie Maxie, Jaxom, Chubba Dub, Teddy Bear, Big) is a 2-year old half-angora Siamese sable gib. Both of his parents were half-angoras, so although his fur is very soft and thick, it isnâ€™t as long as a full angora ferretâ€™s fur can get. It does mean, though, that when he sheds his coat twice a year, we really notice it. It also means that he is not fond at all of the hot weather we have been having in the summer. 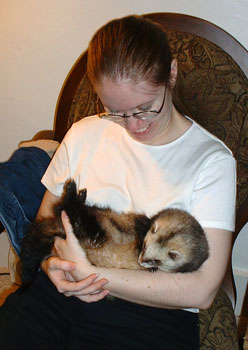 Ajax, aside from being born to sturdy European bloodlines, was allowed to grow to his full size. Male ferrets, left unneutered continue growing for over a year, and actually have a second growth spurt at 18 months of age. We had Jaxie fixed when he was about 16 months old because we couldnâ€™t stand it anymore. He had been in rut for several months previously, which is not very pleasant: he dribbled urine on himself and all over our house, he dooked and chattered like a Geiger counter every time he saw the other ferrets, and he eventually had to have a separate cage and playtime because of the aggression he showed toward Rocky and the amorous passes he made at our three spayed ladies. Now heâ€™s back to his sweet friendly self. 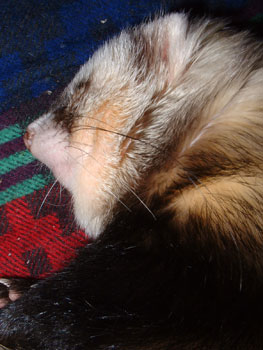 Ajax was named after two Greek champions, the Aiantes: Ajax the Greater and Ajax the Lesser. We figured Ajax would end up being the size of any two of our other ferrets, so it seemed appropriate. We also considered Achilles and Alcibiades, both of which seemed a bit arrogant to us. Plus they didnâ€™t lend themselves to nicknames. 🙂