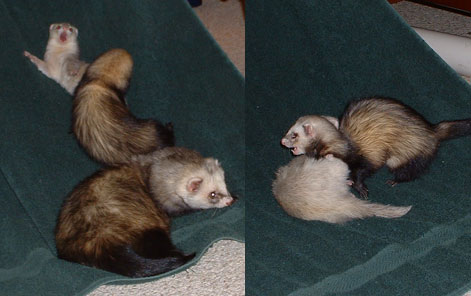 As I mentioned earlier in the week, Nikita has quite a feisty personality. For the most part, she gets along with us now, though Jeremy is still sometimes compelled to call her a demon wuzzle. Nowadays, Niki is working hard to become the dominant female ferret of our little busyness (= pack of ferrets). She is very aggressive with both Pandora and Loki, chasing them and attacking them vehemently when she catches them. She is still afraid of Rocky, and avoids wrestling with him when she can. Ajax, on the other hand, she rather likes, even though her attempts to wrestle with him donâ€™t always cross his radar—her mouth is too small to make much of an impression on his huge neck. More often, she acts like his little sidekick, and hangs around to go after any ferret Ajax already has pinned.

In any case, you always know when Nikita is in a wrestling match by the noise. She is a major chatterbox, and dooks and hisses constantly in play, whether she is the â€œvictimâ€ or the aggressor. Eventually, her batteries need recharging though. 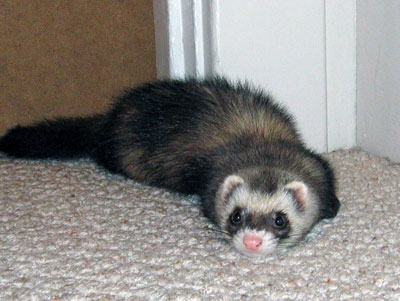