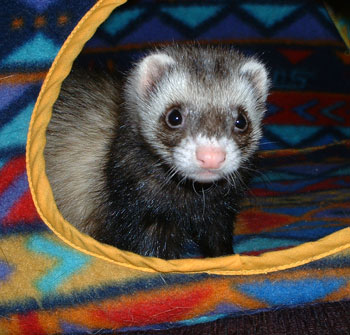 After Rocky, we thought we were done buying ferrets. Actually, though, in the back of our minds, we still saved room for a Big Boy from a ferret breeder, preferably with champagne coloring. After two years of being good, we decided it was time, and contacted M&P Ferretry, a reputable ferret breeder in Oregon City. We were told that they currently had only one female sable kit available, and that we could come up and meet her. That we did.

She was a moose of a little girl, who had apparently been bigger than her male siblings. We thought she was a cutie, and brought her home that very night. As it turned out, the ferret who would be Nikita had a quite a feisty personality. She was pretty well terrified and bit really hard for the first week or two, enough to make us bleed. Fortunately we were able to break her of it, by squealing really loud every time she tried to put her mouth on us, whether it hurt or not; it helped her to realize how hard she was biting. She still play-bites hard, but hasnâ€™t broken the skin since that first week. 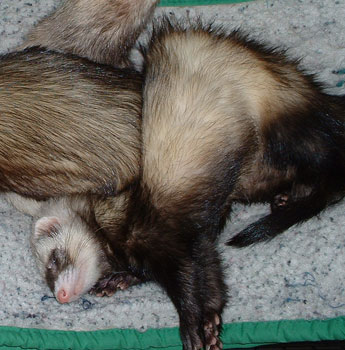