Pandora loves to eat human food, especially cooked chicken, but she isnâ€™t fussy, and will take whatever she can get her mouth on. She also loves Nutrical (a high-calorie paste for ferrets) and Ferretone (a nasty oil thatâ€™s good for their coats). Loki loves to beg for her treats, which are usually raisins or Cheerios, or the ferret treats, or even kibble, if we hold a piece up like itâ€™s a treat. She also attempts to raid bowls of cereal and ice cream, and eats fruit and other sweet things. 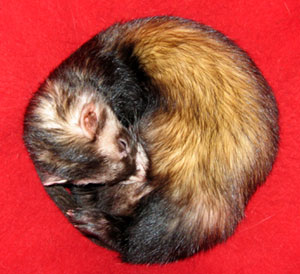 Rocky, however, is a very fussy eater. He was the first ferret we had ever heard of, who would not even try raisins or Nutrical—we had to force them into his mouth the first few times. Now his list of acceptable treats includes raisins, yogurt treats, Nutrical and Ferretone. We have also been successful getting him used to eating chicken gravy (the kind where we grind up a whole fryer—skin, bones, and all—especially to make a meat gravy for the ferrets), but he turns up his nose at everything else. Itâ€™s kind of refreshing to have a ferret who doesnâ€™t beg for human food off our dinner plates. 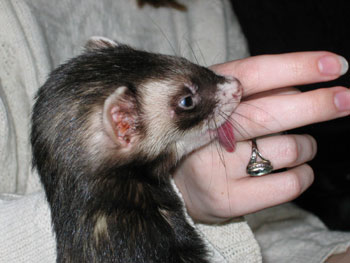 Heâ€™s so fussy that he hardly ever even gives kisses. The other ferrets will lick our hands when they are sleepy, or our feet when we get out of the shower, and most of them will give ferret kisses on our noses also. Rocky doesnâ€™t lick skin. The photo above is literally one of the very few times when I have convinced him to give kisses because my fingers had Ferretone on them.