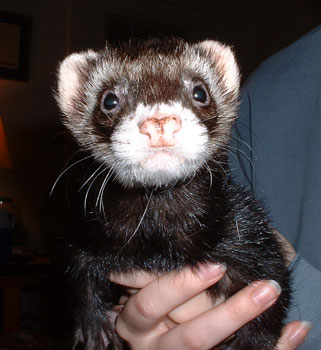 Rocky is our ambassador ferret, because he is so sweet and gentle with everyone, and is not nearly as wiggly as Loki. His only greeting requirement is to climb up to the face of the person holding him, and sniff their lips to identify them, every single time he gets picked up. He has holes in the iris of one of his eyes, so I think he sees more poorly than the other ferrets.

Rocky loves to play: with us, with the other ferrets, and with his toys. He can get a little hyper when Jeremy and I wrestle with him, and grabs our wrists like he would another ferretâ€™s scruff, but he never breaks the skin. Rocky gets along with all the other ferrets except Nikita, who is scared of him for some unexplained reason, and he prefers wrestling with them to playing with people. When he gets in the wrestling mood, he bounces after his playmates like Pepe LePew, completely at leisure, yet overtaking them right away. Rockyâ€™s long legs give him an advantage, and he has a mean sidesweep that flips the girls over so he can scruff them. Only huge Ajax is immune to The Rokâ€™s moves. But no matter how long Rocky can keep his motor revving, sooner or later itâ€™s time for bed. 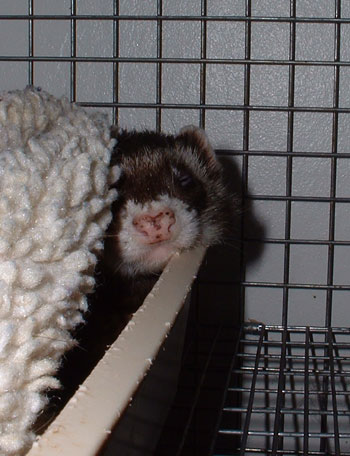