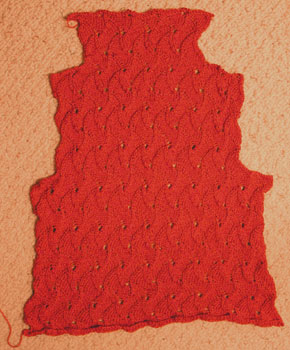 It’s been a while since I wrote about my knitting. I have continued working on the red Brilla shell, and this weekend I finally finished knitting the back, as you can see above. I’m now about two pattern repeats in on the front. Progress greatly improved once I remembered to use a row-by-row index card flipbook to keep track of the lace pattern, which is rather long.

In my last knitting post, I was worried about the way my measurements were coming out. I decided just to keep going, though, and as the lace relaxed under its own weight, that problem corrected itself. Now I think it will fit nicely when blocked. I did notice, however, that the model in the photo has a significantly longer waist measurement than the pattern indicates—this comes just past my waist, while the photo shows something that passes the hips. Not a complaint from my perspective, but something to be aware of.