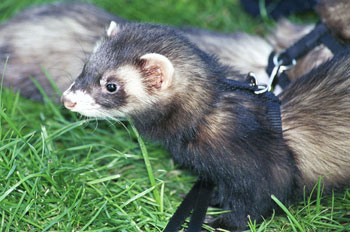 Ragnarok (we call him Rocky) was our third ferret, and last pet store ferret. As was the case for Loki, we were not expecting to get another ferret. It was our first anniversary, and our plans to visit a wildlife safari had just been foiled by a broken-down old car. We ended up at the pet store, and saw a darling little black sable boy with huge paws and a long tail, and fell in love. We carried little Rocky home buttoned into the denim shirt Jeremy was wearing. 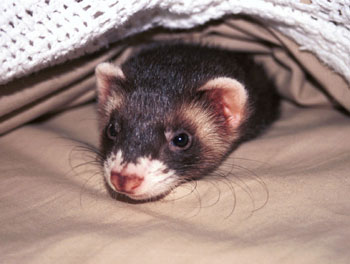 Rocky was a darling kit, with kitâ€™s proportions. Not only did he have huge paws and a long tail, his head was also outsized, all of which combined to make him a bit klutzy. The fact that he was fearless and LEAPED everywhere without looking didnâ€™t help much either. But the excitement of his new surroundings soon wore the little guy out.

As part of Rocky’s introduction, I can’t fail to mention that Rocky has appeared in Jeremy’s and my artwork several times. Jeremy painted a portrait of him a few years back, and I have used him as a subject for several prints, though only one is currently in our gallery.