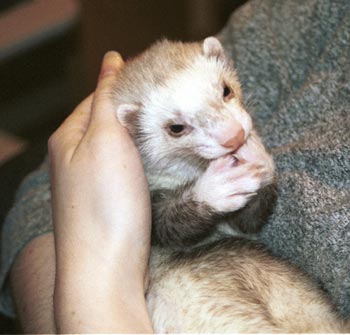 Loki (a.k.a. Loco Poco, Loki-Dokey, Little Loki, Snaggletooth) is a 4.5-year old silver mitt sprite. She is a Marshall Farms ferret, identifiable by the two blue dots tattooed in her right ear–Marshall Farms is a major supplier of ferret kits to pet stores, and they neuter at 3 weeks of age, before the kitsâ€™ eyes are even open, so that they can get the kits to store when they are still tiny and extra-cute. Such early neutering messes up the hormones, so Marshall ferrets are often smaller than privately-bred ferrets, and have a higher incidence of diseases such as adrenal tumors. Our little Loki was about the size of a large hamster when we bought her, and had needle-sharp toenails too tiny to trim, which seems to be another characteristic of Marshall ferrets.

Being a silver mitt means that Loki had a lovely white bib and paws, and a very light grey mask. When she first matured, her body was a medium gray, but silver ferrets are actually all roans, so she is continually lightening up. Now her fur is almost white, so her mitts and bib are barely visible. Eventually she will be considered a DEW, or dark-eyed white. 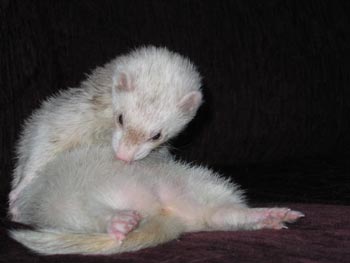 Loki was the subject for several paintings by Jeremy–actually, she featured in his very first a la prima oil painting, inspired by the photo we use for the header of this blog. Here is another of his oil portraits of Little Miss Loki.