Julie and I were fortunate enough to be able to make a trip up to the Last Frontier this past week. My brother, Shaun, has lived in Alaska for the past year and a half. Needless to say, it isn’t very often that we get to visit with him or our nephews and nieces. This trip also marks the first occasion that I’ve left the continental United States (Maybe I’ll have to drive up to Canada some time, just so I can say that I’ve been out of the country).

I had formed many ideas in my head about what Alaska must be like, none of them based on empirical evidence. It’s always interesting to be confronted with a reality that doesn’t match up with the models you’ve created in your own mind.

My model predicted that Alaska is a perpetually ‘cold place’, and while I know that this is far too simplistic and ultimately inaccurate, it was hard to shake the image of permafrost and icebergs. Fortunately, Shaun was kind enough to take us to a place where, though receding, the icebergs still roam. 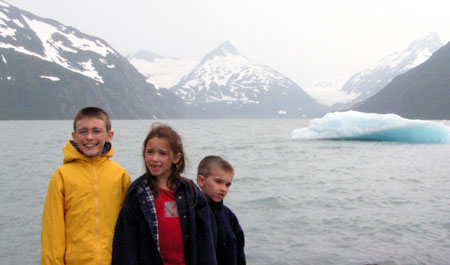 This is Portage Lake, and those are indeed icebergs floating in the water. If you look really hard in the background between the mountains, you can just make out Portage Glacier through the fog. Mind you, even here I was decked out in my ubiquitous ‘chilly’ summer attire of cargo-shorts and a sweatshirt. The air was noticeably colder here than anywhere else we visited in Alaska, and though others complained of being cold, I was not uncomfortable.

If Alaska doesn’t have a preponderance of summer snow, one thing it does have in excess is rocks of all shapes and sizes. Here we see Alek, Leah and Tayler, rappelling down an unstable mountain made entirely of large boulders. What intrepid frontiersmen. 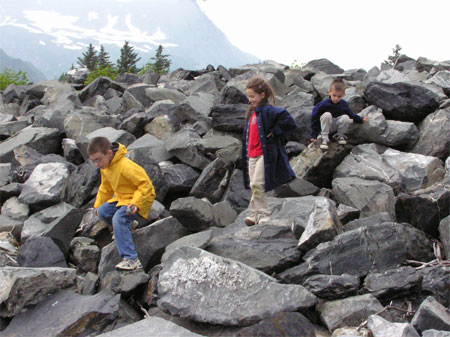 To be fair to the largest state in the union, I’ve included a picture that is more indicative of what one would actually see on a visit to Alaska in the middle of the summer. Bear in mind that my brother lives in the Mat-Su Valley, which is relatively southern Alaska. I understand that Barrow, the northern-most city in Alaska and the United States some 350 miles north of the Arctic Circle, is in fact pretty much like the permafrost and iceberg land that once existed in my mind. 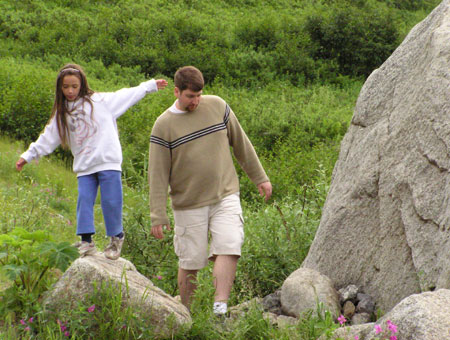 I’ll post some better pictures of the kids as well as some great shots of the Alaskan wildlife shortly. Cheers.

Woodpeckers, Squirrels and Jays, Oh My

Sunday at the Park