One of the local drawing groups that I regularly attend has found itself with a surplus of operational funds. To remedy this situation, I proposed that we hire a guest lecturer to come and give a demonstration to the group. Last night (Tuesday the 22nd) this plan came to fruition. One of the models from our group also models regularly for artist Clint Brown, who is a professor of studio art at Oregon State University.

I’ve always found it fun to watch someone who is really good at something—it doesn’t matter what that something is—do what they are good at. Clint was no exception. What he was able to capture in 5 minutes with the model was impressive.

Here is an early sketch for a drawing that he would develop over the course of an hour. 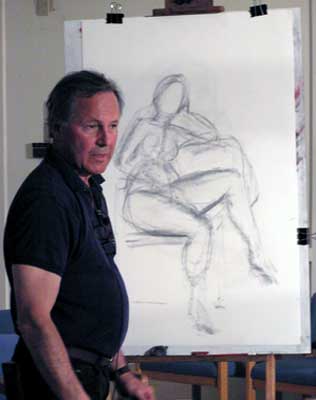 And here is the same work after an hour or so of intermittent work and answering questions. 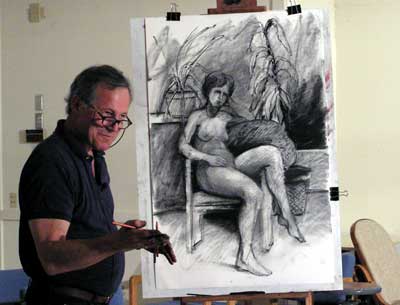 It was interesting to hear Professor Brown speak so highly of Robert Beverly Hale, a draftsman and instructor whose philosophy has heavily influenced my approach to art as well. Hale’s work is one of the main reasons that I decided on the New York Academy of Art and it is encouraging to see that contemporary artists can still wield a sufficient knowledge of proportion and anatomy to render the human form convincingly from imagination.