As I noted earlier in the week, Pandora is high-strung, and dislikes going anywhere unfamiliar or unpleasant. This means anywhere outside the family room where the ferrets have their play-time, but particularly includes the bathroom, which she regards as a sort of ferret torture chamber. Itâ€™s the place where we clean their ears and teeth, but worst of all, it is the place where they get baths. We only bathe the ferrets two or three times a year, but Pandora is Not Amused. When we put her in the water, all her limbs go stiff, and she stares up at us with an utterly betrayed look—often followed promptly by frenzied attempts to leap from the tub, or climb up our arms. She dislikes being wet so much that when she drinks from a water bowl instead of her bottle, she tries very hard not even to get her chin damp. This is especially difficult with Rocky around, sticking his face in the bowl and then shaking off. 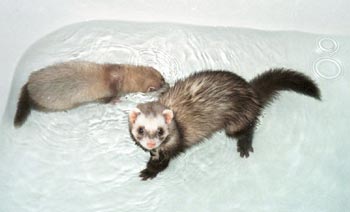 The photo above was taken at Pandora and Loki’s very first bath. The day we got Loki we decided it would be a good idea to bathe both of them so that they smelled the same, and would consequently be buddies henceforth. Didn’t really work, and this is the most relaxed either one of them has ever been in the tub. But bath-time ends eventually, and then it is time for drying off, which means a lot of frenetic activity, with ferrets running all over the place, rubbing their fur against anything at all to try and get the natural oils back. 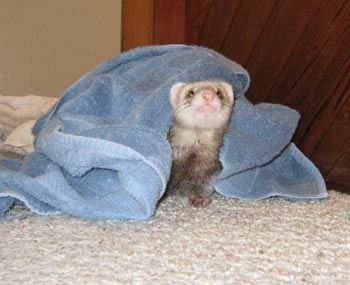