Pandora has a rather dominant personality. For over three years, she was our alpha ferret and queen of the cage. (That all changed when Ajax came along, but that’s a later story.) Not only did she dominate her younger “sibs,” Loki and Ragnarok, she also felt compelled to test every human she encountered for weakness. This consisted of casually coming up to the test-subject, and sniffing their arms and feet very carefully for the best spot to bite. She never bit hard or broke the skin—she just wanted to find out if that person was worthy of her respect. As it turned out, however, the only person worthy of Pandora’s respect for a long time was my husband, Jeremy. She tested me for several years. As she has aged, this aspect of Panda’s personality has mellowed. She no longer deems the testing necessary, and she has decided I’m ok.

Pandora’s personality also means that she does not put up with frivolity from the other ferrets. She only likes to wrestle with them at her own instigation, and hisses her complaints when she’s not in the mood to play. When she first met Loki, who was then a hyperactive 6-week old kit, Pandora was Not Amused. In hindsight I think she probably would have been happier as an only ferret, and she still seems to have the most fun when she gets to have play-time all to herself. 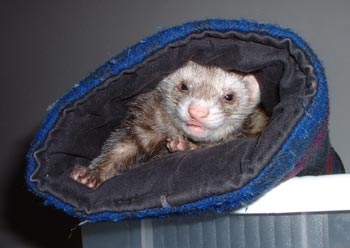